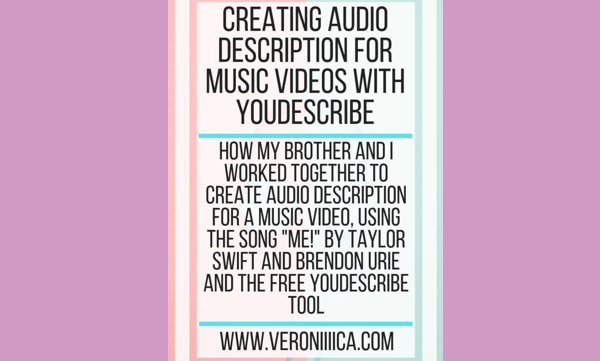 How my brother and I worked together to created audio description for a music video, using the song, "Me!" by Taylor Swift & Brendon Urie.

Over the weekend, Taylor Swift released her latest single, “ME!”, alongside a colorful music video that features lots of visual information. Since I have low vision, it is difficult for me to understand everything that is going on as the video progresses, especially since there is lots of bright lighting. After I told my brother about the new video, we decided to create our own audio description for the new video with YouDescribe. Here are my tips for creating audio description for music videos from the perspective of a viewer with low vision.

What is audio description?

Audio description, sometimes referred to as descriptive audio or described video, is an additional narrator track that provides visual information for people who otherwise would not be able to see it. Audio description is provided during natural pauses in dialogue so it does not distract from the video. Occasionally, describers may pause the video themselves and add description if there are no natural pauses available.

YouDescribe is a free website and iOS app that allows viewers to watch YouTube videos with audio description. The audio description tracks are written and recorded by sighted volunteers so that people with blindness and low vision can watch YouTube videos and receive visual information. YouDescribe is a project of the Smith-Kettlewell Eye Research Institute in San Francisco, California.

YouDescribe is available online and as a free iOS app. At this time, audio description tracks can only be created through web browsers. YouDescribe can be used with or without an account for viewing videos, but connecting to a Google account is required for requesting videos and creating descriptions.

Considerations for describing a music video

Here are some considerations for describing a music video that we came up with:

Many people who are sighted watch a music video for the visuals, not necessarily for the music. They can always listen to the song by itself, but often focus on the visuals that are included in the video, with the exception of lyric videos.

Using inline descriptions for the video

How we wrote the description

Before we even started taking notes, my brother and I watched the “ME!” music video in its entirety so we could see what we were getting ourselves into. We then made notes of the general themes of the video, which included pastel colors and lots of different costume changes.

After we watched the video in full, we then watched the video in one-minute increments to take notes on the various scenes and describe what was happening. We still wrote very general notes, but were able to pinpoint the different settings of the video, which included the city streets, a grand mansion, and a colorful stage.

Once we finished that, we watched the video in ten-second increments, taking more detailed notes about what was going on. I held my iPad screen close to my face so I could see the video, while he streamed the video on Chromecast to our TV.

Here are some examples of lines from our audio description script and details we thought were important:

Since we only had a limited amount of time to read the descriptions, we decided to omit the following information from our audio description because we did not believe it was relevant to the rest of the video:

To record the audio description for the “ME!” music video, my brother organized our notes into a script and used the YouDescribe recording features to record his descriptions. Since he chose to use inline descriptions that played alongside the video, it took a couple of tries to get the video to line up with the audio tracks, plus there were a few times we forgot to hit the record button. The recording process was quick, about twenty minutes, and it took us about an hour and a half from start to finish to create the audio description.

I’m really proud of how the audio description for “ME!” turned out and my brother did a great job for his first ever audio description. Since he is a film student, he has a great eye for detail and understanding the visual aspects of a film or video, which makes him a natural candidate for creating audio descriptions.

I hope that in the future, more music videos will have audio description tracks available so that fans with blindness and low vision will be able to appreciate the visual elements, choreography, and other work that goes into creating a music video. Until then, fans can use YouDescribe to create their own descriptions and gain a deeper appreciation for their favorite artist’s videos.