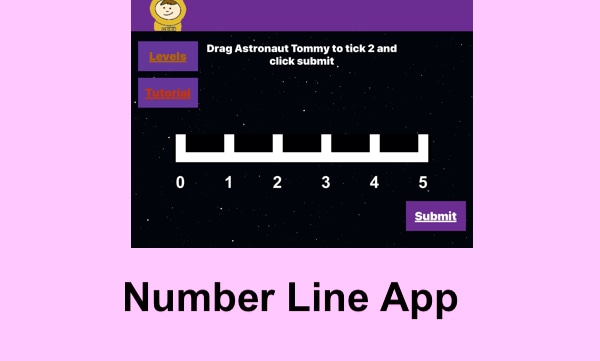 The Cosmic Numbers App is a fully accessible iOS app designed to teach a variety of number line skills to students with visual impairments. I’m very excited about the recent updates in this app, which was first mentioned a year ago! Number lines are used as a tool teach foundation math concepts. Students with visual impairments are introduced to and use tactile numbers in early elementary grades. To learn more about teaching number line concepts to students who are braille readers, follow Jessica and Logan (an amazing TVI and young braille student) through their number line journey.

Note: As always, students should first be introduced to tactile representations of a number line before being introduced to a digital number line. With that in mind, it is also important to keep in mind that students with vision have access to numerous fun apps that teach/reinforce number line concepts. These apps are highly motivating, students can use the apps independently, and the apps are often integrated into the classroom and/or accessed at home. With COVID-19 school closures, educators – especially TVIs – are seeking and using more digital educational tools!

While general education students with vision have access to numerous number line apps, these motivating apps are not accessible with a screen reader. Computer science students at the University of North Carolina decided to tackle this issue. In the spring semester of 2019, a team of UNC students began working on how to make an accessible digital number line and games that focus on teaching number line numeracy skills paired with teaching basic tech skills. In the spring semester of 2020, a second team of UNC students took over the app, adding more game levels, creating much-needed interactive tutorials for the games, and fine tuned the original version of the app.

The digital number is set up to mirror the standard tactile number line with a line, tick marks above the line and numbers below the line. Students should navigate the digital number line the same way they navigate a tactile number. Example: The student should learn to count the tactile tick marks when (not the numbers) using a number line to complete addition or subtraction problems; when the student has moved to the desired tick mark, then he/she should drag his finger down to see what number he/she is on.

The video below demonstrates the new version of Cosmic Numbers app, focusing on the interactive tutorial that teaches the tech skills required to access, navigate and play the number line games. This first built-in tutorial breaks the number line down into small parts; the student has to find/explore each part before moving to the next step.

The next video demonstrates Level 2. In this level, the student is first taught how to move Astronaut Tommy to a specific location on the Number Line, using the popular drag-and-drop gesture. (With VoiceOver on, double tap and hold, then drag Astronaut Tommy to the desired location. Lift your finger to release him. Note: If Astronaut Tommy is released in space (not on the tick mark), he will float back up to his starting position in the top left corner of the screen. The end of this video demonstrates the drag-and-drop activity with the screen curtain on (dark screen – no visuals).

The third video briefly describes levels 3-8. The concepts in these levels include:

The initial goal with apps created by students at the University of North Carolina is to solve an accessibility-related problem. These apps are often “proof of concept” apps; in this case, Cosmic Numbers has created a way to make digital number lines accessible for students who rely on a screen reader and has created games that teach the numeracy concepts that are typically taught using number lines. The UNC students who worked on this app, will be graduating this semester and will not be able to maintain this app through software updates. As a proof-of-concept app, the goal is to share this app with potential app developers/agencies who might be interested in either taking over this app and releasing it under their brand name or creating their own version of an accessible number line app using ideas gleaned from Cosmic Numbers.  Currently, Cosmic Numbers, which is a robust app, is in Beta version and has not been released in the App Store.

A big thanks to the Spring Semester 2020 Cosmic Numbers Team in the COMP 585 course taught by Dr. Diane Profesky!