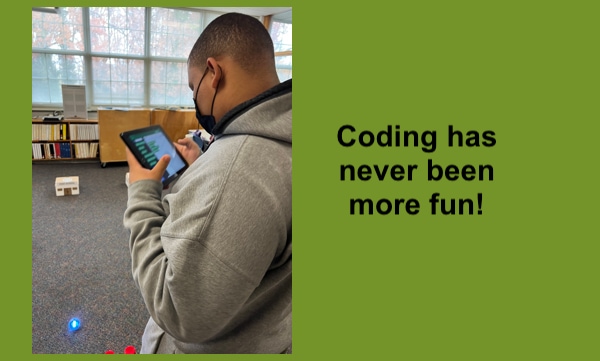 Running around the Sphero City - where can you send your robot?

In honor of the CCSForAll (Computer Science for All Students), Governor Morehead School for the Blind students were learning to code using the free SAS CodeSnaps app and the Sphero robot. The course used the amazing Sphero City buildings (Created by April for Tim and the Winsconsin Center for the Blind) and the new Braille Code Blocks (created by SAS).

In Tim’s original Sphero course, the Sphero City was set up on top of conference tables and students used the old code blocks which enabled them to choose how far forward the Sphero moved using increments of .10 meters. For simplicity, the new Braille Blocks only have the option of moving 1 meter, requiring more space for the Sphero City. Today’s activity was set up on the floor.

Image 1: The 2 meter by 3 meter Sphero City has 7 buildings: John’s house, Pizza, and Mary’s house are in the first column, the high school is at the end of the second column, and Sarah’s house and the Post Office – with the bank beside it – are in the third column. A row of red solo cups marks the Start line. Image 2:  Student exploring a Braille Block with a building on the table in front of her. Each student learned the concept of 1 meter by using a meter stick to estimate how tall he/she is and by learning how many step(s) he/she takes to walk a meter. Then the student applied the 1 meter knowledge by measuring the Sphero City, using either the meter stick or using their stride when walking the course. The Designer team member explored the course, measuring as needed, and determined the route. The Designer then shared the route information with the Coder. The Coder used the Braille Blocks to write the code that will navigate the Sphero Robot to the desired destination.

Image 4: Coder placing braille code blocks in sequence in a column to run the first course. Image 5: Sitting beside the Coder, the Designer is providing information about the route while the Coder is choosing the Braille Blocks and placing the blocks in the desired order. 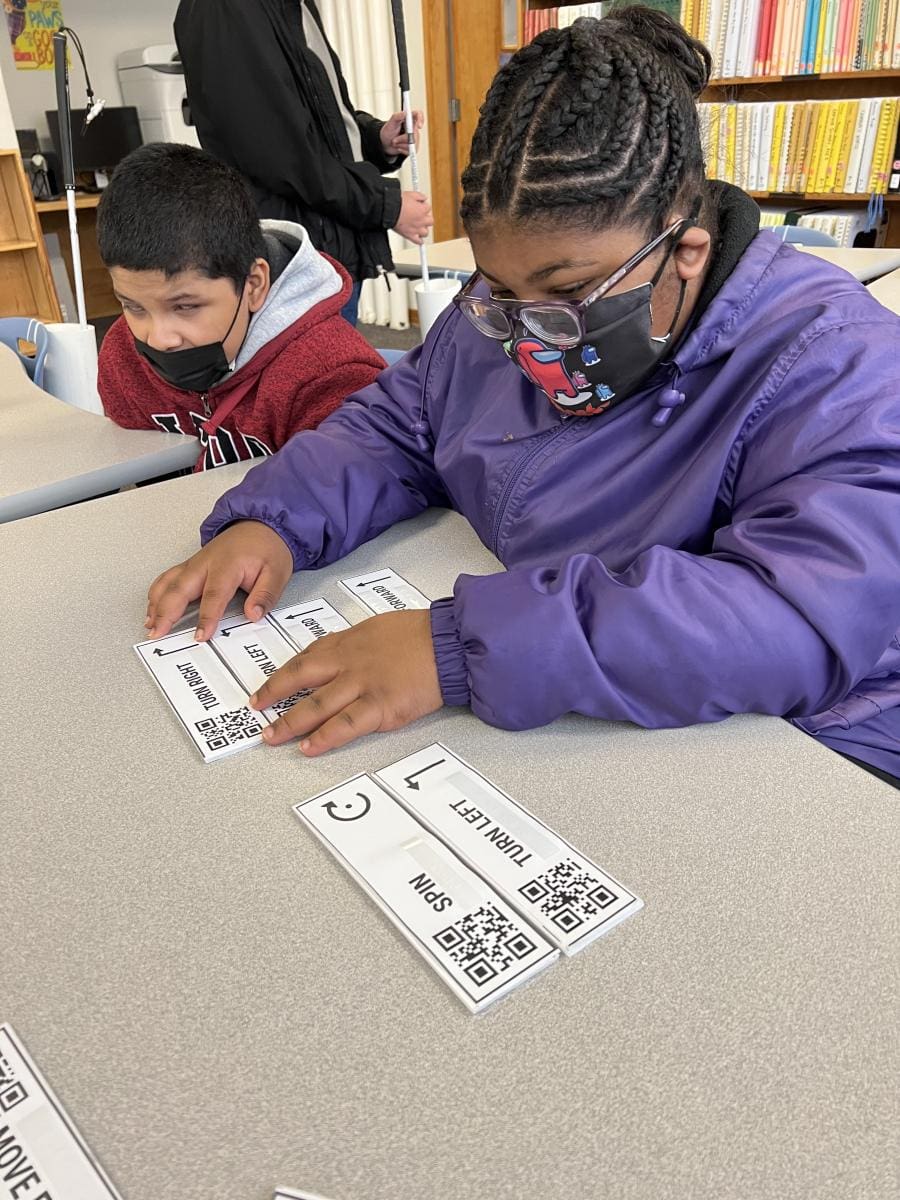 The Designer (if two-person team) or the Tester (if 3 person team) use the CodeSnaps app to run the Sphero through the course. This person was responsible for determining if the Sphero ran the course correctly or if not, where the Sphero went off course.

Image 6: Standing by the start line, a student uses an iPad to run the code. If the Sphero did not successfully complete the course, the team met to ‘debug’ the route/code. The Designer/Tester can re-walk and re-measure the code. Designer/Tester and coder can also work together, with the coder calling out each code block and the Designer/Tester following the directions by physically walking forward 1 meter, turning, etc. Run the new code – did the Sphero successfully complete the course?

Image 8: Designer/Tester is running the Sphero through the course again, after debugging the code. Image 9: The Coder and Designer have switched team positions for the second route. The new Designer is providing the information about the route while the new Coder is choosing the Braille Blocks and placing them in the desired order. The buildings used in this activity were loaned to us by Tim from the Wisconsin Center for the Blind. (Thank you Tim and April!) These buildings fold flat for storage and shipping, and are sturdy for longevity. The buildings are made out of foam board, carboard, tape, Velcro circles and have large print letters and braille labels.

Image 10: Front view of the Post Office Sphero Building. This is a three dimensional building with the sides created out of foam. The roof, window overlays, and door overlay is made of cardboard. The door and labels (print and braille) indicate the front of the building. Image 11: Inside of the Post Office building with the roof removed. The “floor” of the building is two pieces of overlapping cardboard with Velcro circles. The two pieces Velcro together, helping the building to keep it’s shape. Image 12: The Post Office building laid flat. The roof is in the up position, the floor is in the up position and the front and one side are visable in the picture. (The parts are all taped together, enabling the pieces to stay together while lying flat or when in the 3D “box” position.) Here is a quick video that shows a closeup on how the buildings are made and how they fold up.