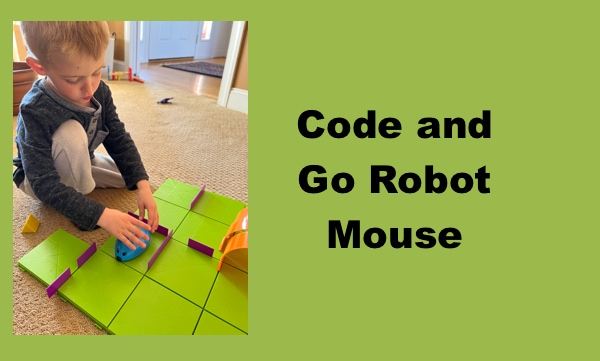 Encourage creativity and problem-solving during free play with Code and Go Robot Mouse!

Introducing a coding robot to young students promotes positive, creative, and educational engagement with technology. Designed for young kids, Code and Go Robot Mouse comes with tactile manipulatives, including grid tiles and obstacles. Have you heard the news? APH now provides Code and Go kits that include the original Code and Go robot and materials plus tactile graphics for the Code and Go Robot Mouse activity cards and tactile stickers to adhere to the arrow command cards! These tactile graphics are game changers!

Note: The photo below is the same activity card (#11) in the third video in the previous Code and Go post. To learn more about Code and Go Robot Mouse – what it is, how it works, and modifications for students who are visually impaired, see the  Coding Concepts: Code and Go Robot post. APH provides quality Code and Go Robot Mouse tactile graphics – including a key that identifies each symbol and a tactile graphic of the mouse with the buttons labeled in braille. Educators no longer need to spend time creating their own graphics to make the game fully accessible!

The Code and Go Robot Mouse is engaging and educational for a variety of age groups. While designed for young students the more complex coding concepts are also engaging for older students. The Code and Go kit is labeled for ages 4+ and many preschool classrooms are doing group activities using Code and Go. Code and Go is also a fun activity for families and is reasonably affordable for families to purchase for home use.

I recently had the opportunity to introduce Code and Go mouse with a three-year-old. This child quickly learned to “code” the mouse and began coding the mouse to travel around his house. He figured out how to “trash” (his term) or “clear” the previous code and when NOT to clear the previous code. He typically pushed the arrow buttons to create short sections of the route and then ran the route. If the mouse ran into the wall, he cleared the route and started over. If the mouse moved along the desired path, he added additional commands. This activity of navigating the mouse down the hall, turning into the kitchen, going around the island, etc. was the student’s idea. He learned spatial concepts (e.g. Traveling down the hallway required “lots” of Move Forward commands while traveling around an obstacle took one or two Move Forward commands.) He practiced his rote counting skills as he pressed the Move Forward button. He particularly enjoyed making obstacles and crashing through them – especially stacking plastic cups to create noisy crash-thru obstacles! At age 3, the student definitely preferred “free play” around the house instead of coding on the tiles. Free play gave him opportunities to problem-solve. He discovered that where he placed Colby (the mouse) mattered; too far one direction or another and Colby would hit the doorframe when turning into another room. He also played with the buttons and figured out the Action button. Note: The action button randomly performs one of three things: move forward and back, loud “squeak” or “chirp-chirp-chirp” (and eyes light up). At this age, it was a little more challenging for the three-year-old to code the mouse through pre-determined routes on the tiles. He was highly motivated when doing his own thing with Colby!

Note: This three-year-old was entertained for hours and after the initial instruction, played independently. Although, he did like showing an adult what Colby, the mouse, could do!

A four-year-old boy whose favorite activity is building – taking things apart and putting them together, absolutely loved Code and Go Robot Mouse! He explored the different buttons and figured out what each button did. He found the on/off toggle button on the bottom of the mouse and discovered that there is FASTER toggle option – which worked well on the floor but not as well on the grid tiles. Again, this student wanted time to discover things during free play. After initial exploration and coding student-created routes around the room, the 4-year-old was introduced to the tile grids. Initially, he was guided to code the mouse through a simple route on the grid tiles. He quickly discovered that a turn is paired with a Move Forward command. This four-year-old wanted to create his own course on the 4×4 grid tiles, using tunnels and walls. Using his imagination, he added his favorite dinosaur to the grid and made up stories to go along with his scenarios. He spent time debugging his routes and figuring out the correct turns and movements. He particularly liked to change the tile formation. He made a long straight “road”, then a road with twists and turns – laughing if the mouse rolled off the tile!

Keeping in mind that this young boy loves to build, he was shown the APH tactile diagrams and used these diagrams to build the prescribed grid. He added the walls and tunnels in the prescribed place. He did initially need some help figuring out how to position the tiles so that they lock together. (Each tile has interlocking pieces: two sides that have connectors that stick out and two sides with holes that the connectors fit into. It was helpful to initially stack all the tiles facing the same way, so that he could quickly pick up a tile and know which way it was facing.) When running these routes, he typically coded a couple of moves and then had Colby run those moves. If incorrect, he “trashed” the commands and started over. If correct, after an excited “woot-woot!”, he added another couple of moves. He could create fairly complicated routes, using this method of adding on the next 2-3 steps. At 4, he could not retell the full complex route independently. The arrow cards were available, and he could identify the move forward/backward cards but did not consistently name right and left cards correctly. However, he was not ready to use the cards to create routes; the command cards did not hold his attention.

Note: Free play is wonderful for individual time with Code and Go; if Code and Go is introduced as a class activity, there are creative ways to do group free play, where students incidentally problem-solve and discover things. Young students will spent significantly more time engaged with activity when they are success and when allowed to “free play”. Code and Go would make a great Center activity!


When introducing the tactile activity cards, choose a simple route. Card #1 has the mouse moving forward two times to reach the cheese.

Photo of the #1 tactile and print Activity Cards. Some students who are visually impaired may struggle with identify if the turn is right or left.  As Colby moves around, the perspective changes. A student might think about right and left according to which way he/she is facing; but in this game, the turns are from the mouse’s perspective. If the mouse is in row 2 column 1 and the cheese is in row 2 column 2, you have to know if the mouse is facing up (row 1) or down (row 3) to determine if the mouse will turn right or left to reach the mouse. Have the student feel Colby’s nose to confirm the direction the mouse is facing. If the student continues to struggle, try recreating the grid with life-size squares (use Foam Mat Floor Tiles) and have the student pretend to be Colby. The student can walk through the life-size course to get a better understanding of the mouse’s perspective. As students’ skills and knowledge progress, Code and Go can be used to teach additional concepts. The arrow command cards are beneficial for remembering longer routes. Since “code” is written vertically, meaning each line of code is on a different line, the arrow cards should be placed in a column. For students who are visually impaired, the vertical arrow cards can be lined up against either the right or left edge of the tile grid. Using the arrow command cards is part of learning to code. After all, coding is simply the language used to give a computer (robot) instructions.

Students can also build row, column and grid concepts. Use these terms to identify where Colby, the cheese, actions, or obstacles are located.

As students learn to develop a mental map of the grid and how to navigate the course through the grid, students are building O&M concepts. Can the student create a “road” that mimics an O&M route in his/her school?

Often students who are blind or low vision do not have many opportunities to be creative or to “draw”. Being able to arrange these tiles to create their own grid, shape or “road” encourages the student to be creative. While this might not be “drawing” per se, it is the first step in building creativity. Taking the tactile diagram and “building” the diagram is another form of creativity. An older student could take this a step farther by creating his own Code and Go course then create his version of the accompanying Activity Card using graph paper and tactile materials, APH Wheatley Kit, or Sensational Blackboard.