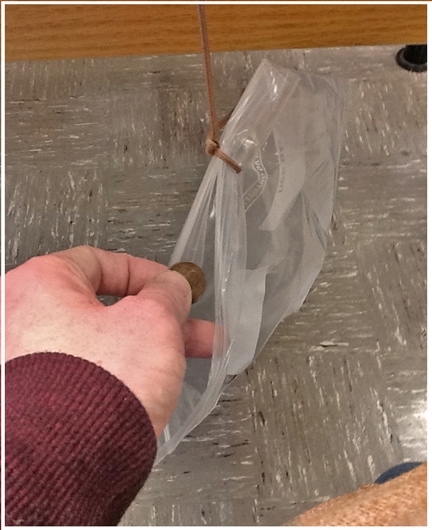 This hands-on activity is designed to teach students who are blind or visually impaired causes of friction.

In this hands-on activity, students are introduced to the concepts of static and kinetic friction and discover how the type of surface involved affects the strength of the frictional force. Prior to the activity, students discuss real life observations they have made illustrating friction at work (pushing an object across a rough surface, sliding on ice, etc.).

The instructor may choose to pair this discussion with demonstrations, such as asking the students to push a heavy box across a slick surface, versus a carpeted surface.

Discuss how kinetic friction is exerted on one surface by another when the two surfaces rub against each other because one or both of them is in motion. This frictional force is dependent on the type of surface as well as how hard the surfaces are pushing against each other.

By understanding Newton’s laws, students may conclude that if you push or pull an object across a surface at a constant velocity, the force of friction is equal and opposite in direction to that of the push or pull.

Kinetic friction – The force of friction exerted on a surface as it rubs against another surface due to being in motion.

Static friction – The force exerted on a surface by another when neither surface is in motion. Maximum static friction is overcome when the object begins to move as a separate force is applied to it. Static friction acts in response to a force trying to cause it to move.

This activity allows students with visual impairments to explore how the tactile qualities of different surfaces directly affect frictional force. The use of pennies as an informal metric of force is chosen due to ease-of-use, but a further extension/alteration could include the use of an adapted spring scale, of which is shown below. To observe the movement of the object across the different surfaces the student may be directed to place their hand at the edge of the surface, or lightly above it, feeling for the moment when the pull of the pennies exceeds that of maximum static friction and object is set into motion.

Prior to the activity it is necessary that the materials be collected and the ‘friction boards’ be created. We have provided a list of suggested materials, but most any material with a tactually distinct surface can be utilized. The number of which may range anywhere from 2-12, depending on how many trials you would like the students to attempt.

To create the board, locate a cardboard square and mark with a grid of even spaces. Cut out samples of each of your materials to match the spaces and, using a hot glue gun, attach them to the square. Place WikkiStix™ around the parameter of each section to make more explicit the defined areas, and to create a boundary for the moving object. Place the ‘friction board’ on a tray making sure it’s raised enough as to be even with the edge of the tray (we placed books underneath the boards).

To create the weight, poke a hole in the plastic bag and tie the string to it, tying the other end to the small weight.

Have the students try the experiment with objects of differing weights. Ask the students if the amount of force needed to overcome static friction varied based on the weight of the objects being tested. Explain that the weight of an object affects the amount of normal force being exerted between the object and the surface it rests on. In general, by increasing the weight you are increasing the normal force, and therefore causing an increase in static friction. You may choose to point to examples where weight is not equal to normal force, asking the students ways in which this would occur.

b.  Conduct a larger-scale version of this experiment by filling a box with a heavy material such as wooden blocks. Put a hole in both sides of the box and feed a length of rope through the holes. Tie the ends of the rope to an adapted spring scale, and another length of rope (w/handle) to the other end of the scale. Walk around campus finding varying surfaces (concrete, grass, sand, etc.) and record the amount of force needed to make the box move at a constant velocity.