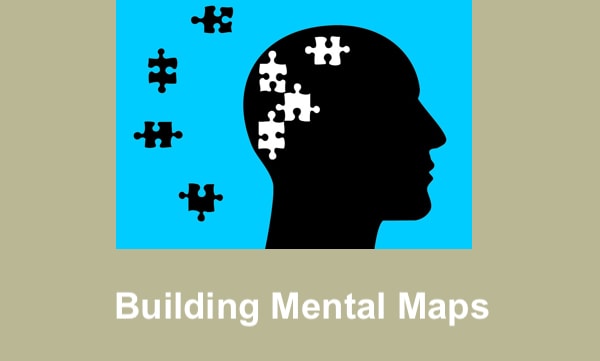 Building mental maps starts with room familiarization and then then the world!

As an O&M, my goal is to teach my preschool students to know where they are in relationship to other things around them and to know the spatial relationship between various locations/objects in their home and in their classroom. Mental mapping often starts with room familiarization: naming each wall and what is along that wall.

Example: For a preschooler who receives O&M services at home, start with the child’s family room. Typically, rooms and buildings have four walls and are rectangular in shape. Name the wall with the front door (or main entrance into the space) as Wall #1. Is there anything else of importance on Wall #1? If so, associate that with Wall #1. (In this scenario, Wall #1 also has windows and a toy box.) Most rooms flow a set direction, so the typical path through the room (left or right) will be Wall #2. (Wall #2 follows the flow of the room – it does not matter if it is left or right from Wall #1.) In this scenario, the couch is on wall #2. Wall #3 has the door to the hallway/kitchen and Dad’s chair. Wall #4 has the TV.

Describe the room starting with Wall #1, and sequently around the room naming the walls and what is associated with each wall. Ask the student to describe the room. Do the same activity with other rooms, such as the kitchen or the child’s bedroom.

Recreate the room using a box and objects associated with objects in the room. Cut the front door so that it can swing open and shut. Cut out the hallway entrance (if it is open space). Use a block for the TV, a small pillow (or piece of fabric over a block) for the couch, etc. If there is a change in flooring, add carpet or a texture to represent the different floors.

Be creative! I have used a larger box and doll furniture to represent different rooms. Take an item away and see if the student can name which item is missing. Have the student place the item back in the box along the correct wall.

Create a tactile map of the room. Add velcro to the objects associated with each wall, so that the items can easily be removed or placed. I have used a magnetic board with various shapes and textures to create on-the-fly self-familiarization room maps.

The image below shows a smilling 3-year old boy sitting in a van with a magnetic board on his lap. He is placing 3×3 foam cards in sequence along the walls #1-4 (edges of the magnetic board) representing PetSmart’s store layout. Foam cards in the picture include a bumpy blue fish, a soft cat’s head with whiskers, a plastic 2D dog house and furry texture representing a dog bed. At the beginning of the school year, the child should be oriented to his classroom. Start by developing a good mental map of the room using room familiarization – naming and labeling areas/objects associated along each wall. In this scenario, the door from the hallway is Wall #1. Wall #1 also includes the cubby area, sink, and bathroom door. Wall #2 is the front of the room: board and Circle Time area. If the child is ready for additional concepts, add in corners when appropriate. Example: The teacher’s desk is in the “corner of Wall #2 and Wall #3”. Wall #3 has windows (sunlight, temperature and often outside sounds are good clues) and centers. Wall #3 is across the room from Wall #1. In the corner of Wall #3 and Wall #4 is the Reading Center. Wall #4 has bookshelves and cabinets. Repeat the point and name the associated objects activities.

After the student learns the perimeter, then introduce items in the center of the room, such as his desk. Be sure that the student understands that the wall is a line and not just one point.

Create tactile maps. Be creative! I have used a large box (washer/dryer box) to create a mini-classroom. Cutting a door that swings open/shut, adding a real hook for the cubby area, etc. The student can actually sit inside the box and touch all four walls. This is a great way to also teach about ceiling, floor, etc.

After learning the departments along the perimeter, then introduce blocks of areas and ‘hallways’ in the middle of the store.

Image of a 4 year-old girl and her O&M intern exploring a tactile self-familiarization map of the Dollar Store. The foam board map has foam cutouts representing the edge of the store and center of the store (aisles are indented) with velcro dots aligned along the walls. Small velcro-backed textures and images represent the various departments along the store’s perimeter. The student is placing each tactile marker in the correlating spot on the tactile map. Teaching a student good mental mapping skills will encourage and support the student to be an independent traveler. This student will be able to find his way back to the front door or through the store from any location. Students who learn turn-by-turn routes, have to be taught each and every route. These students often do not have the ability to travel independently in new environments.

My generation – sighted drivers – grew up using paper maps to plan and navigate routes. After looking over the map, I had a general idea of where I was going to go, names of interstates/roads to look for, and a general idea of where I am in relationship to nearby cities, states, the ocean, etc. When traveling from North Carolina to Michigan, I knew that I needed to go north or west. When car GPS became available, I became an instant idiot. Yup, if the GPS said turn right, I try to turn right, even if it was on a one way road going the wrong direction! With the GPS, I had turn-by-turn directions, but I lost my mental map of the environment I was driving through. I can get from Point A to Point B or from Point A to Point C, but on my own, I do not know how to go from Point B to Point C. Don’t get me wrong! My phone GPS is often running when driving on trips (have to love that real-time traffic update!) but I also combine the GPS with my mental map; I try to look at the map first to get a general idea of where I am going, time and distance and a few landmarks along the way. With the big picture (mental map), I can choose to take a short cut.

The video below demonstrates walking a route using Microsoft Soundscapes.

Want additional ‘rainy day’ mental mapping activities? Check out the numerous Paths to Technology posts on coding concepts!  Many of these coding logic games double as mental mapping and foundational O&M concepts – especially the ‘unplugged’ activities. (Unplugged are activiites that do not require technology!) Here are a just a few coding concept posts to get you started!