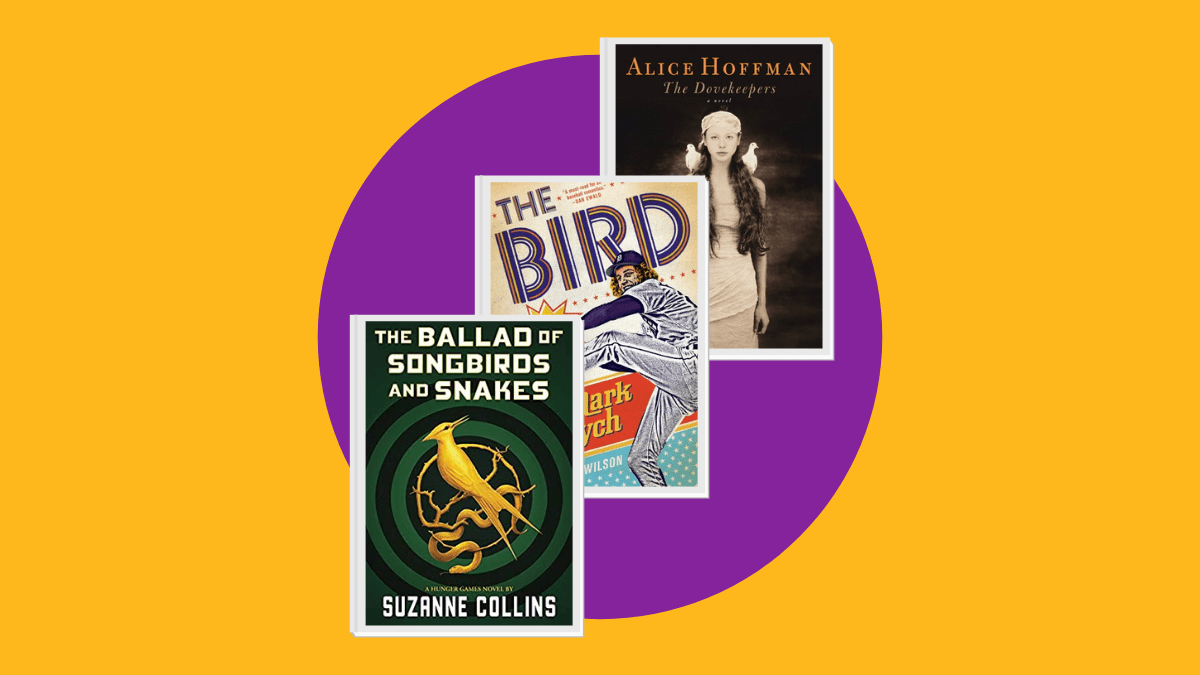 Books with bird or bird names in the title: Perkins’ recommend reads

Soaring high with books that include the word bird or bird names in the title.

I came across the idea of seeking out books with the word “bird” or bird names in the title from watching Jeopardy not long ago. One of the categories was about birds in the titles of the books. I was fascinated, not only because it was such a different category for Jeopardy, but because birds themselves are so intriguing: there are so many species, they can fly, and many of them have particularly interesting abilities. For example, according to Encyclopedia Britannica, “the peregrine falcon is best known for its diving speed during flight—which can reach more than 300 km (186 miles) per hour—making it not only the world’s fastest bird but also the world’s fastest animal.”

The following books all have the word “bird,” “birds,” or a specific bird name in the title – although they may not have anything to do with birds! You just never know what kind of book you may end up reading, and that is the beauty of discovery.

Digital book (DB), braille (BR), large print (LT), and audio-described videos (DVD) copies of these titles are available from the Perkins Library or the Worcester Talking Book Library. Please contact the library to order any of these books.

The Ballad of Songbirds and Snakes

Years before the events of The Hunger Games (DB 68384), a young Coriolanus Snow prepares for his one shot at glory as a mentor in the Games. But he’s been given the humiliating assignment of mentoring the female tribute from District 12. Some violence. For senior high and older readers. 2020.

The Bird: The Life and Legacy of Mark Fidrych

Biography of baseball pitching phenomenon Mark “The Bird” Fidrych (1954-2009), nicknamed after Sesame Street’s Big Bird. Highlights Fidrych’s 1976 rookie season with the Detroit Tigers and the injuries that ended his career. Discusses his later life in his home state of Massachusetts, where he drove a truck for hire. 2013.

During the Spanish Inquisition, Fatima is a concubine in the royal court of the Alhambra, the last remnant of Muslim Spain. Her friend Hassan, the palace mapmaker, has the magical ability to draw places he’s never seen and shape reality with his pen. Some violence and some strong language. 2019.

The Black Swan of Paris

Paris, 1944. Chanteuse Genevieve Dumont is a darling of the Nazis–a status she uses as a smokescreen for her activities as an ally to the resistance. When her mother is captured by the Gestapo, Genevieve must take a more active role to rescue her. 2020.

Dance of the Seagull

Before leaving for vacation with Livia, Montalbano witnesses a seagull doing an odd dance on the beach outside his home-and then the bird suddenly drops dead. He realizes that Fazio is missing and soon learns that he was last seen on the docks, secretly working on a case. Translated from the 2009 Italian. 2013.

70-77 C.E. Among the nine hundred Jews holding off the Romans at Masada, a mountain in the Judean desert, are four women: Yael, an assassin’s daughter; Shirah, called the Witch of Moab; Shirah’s warrior daughter Aziza; and Revka, a grandmother whose daughter is dead. Violence. Bestseller. 2011.

Every Word Is a Bird We Teach to Sing: Encounters with the Mysteries and Meanings of Language

Essayist, novelist, and autistic savant, the author of Born on a Blue Day (DB 63862) examines the intricacy and power of language in a variety of countries and cultures. Discusses chatbots, numerical language, names that have become court cases, telephone grammar, constructed languages, and more. 2017.

Download Every Word Is a Bird We Teach to Sing

Eyes of the Hawk

Louisiana-born Reed Sawyer sails to Texas and is hired by rancher Thomas “Hawk” Canfield, who is embroiled in a feud with businessman Branch Isom. After fighting in the Civil War Sawyer returns to Texas and discovers that Canfield’s enmity still festers–and threatens his community and family. Spur Award. 1981.

The Falcon Thief: A True Tale of Adventure, Treachery, and the Hunt for the Perfect Bird

Chronicle of the United Kingdom’s case against Jeffrey Lendrum for stealing the eggs of endangered bird species from their native habitats and the work of Andy McWilliam–a retired policeman and experienced investigator with the UK’s National Wildlife Crime Unit. Details the underworld of black market birds’ eggs. 2020.

Flight of the Sparrow: A Novel of Early America

Massachusetts, 1670s. Mary Rowlandson is captured and enslaved by a local tribe when they attack her town. Her time with them makes her question her faith and the Puritan way of life. When she returns to English society, she writes a book of her experiences. Violence. 2014.

At the age of thirteen, Theo Decker survives an accident that kills his mother. Abandoned by his father, Theo is raised by wealthy family friends. His one connection to his mother–a painting–draws Theo into New York City’s underground art world as he grows older. Bestseller. 2013.

Gorilla and the Bird

A bipolar Brooklyn public defender tells of how he woke one morning convinced his every moment was being filmed, leading to a manic episode that landed him in Bellevue Hospital. His mother, known as the Bird, helped him pull through. 2017.

H is for Hawk

Cambridge lecturer describes the year she spent training a goshawk, a decision she came to after the sudden death of her father in 2007. Discusses the field of falconry, which her father avidly practiced, the grieving process, and author T.H. White’s book The Goshawk (DB 42687). Bestseller. 2014.

I Heard the Owl Call My Name

With only two years to live, a young minister is sent by his bishop into the wilds of British Columbia to a parish called Kingcome. There, among struggling Indians, Mark Brian learns enough of the meaning of life not to fear death. For junior and senior high and older readers. 1997.

I Know Why the Caged Bird Sings

Memoir by African American poet and essayist (1928-2014). Describes her childhood and adolescent years in rural Arkansas, St. Louis, and San Francisco, and the racial and gender indignities she endured. Digital restoration of Angelou’s original 1970 analog recording for the American Foundation for the Blind. Some violence, some strong language, and some descriptions of sex. 1969.

Inspirational fantasy about a gull who refuses to conform. This edition contains the previously unpublished part four and Last Words by the author. 1970.

While hunting for his partner’s killer, San Francisco private detective Sam Spade runs afoul of the police and a cluster of eccentric characters looking for the priceless statuette of a black bird. Digital restoration of Leon Janney’s original 1961 analog recording for the American Foundation for the Blind. Some violence. 1930.

Owl and the Japanese Circus

Ex-grad student turned antiquities thief Alix “Owl” Hiboux has a firm rule against supernatural jobs. But when Mr. Kurosawa, a dragon who runs a Vegas casino, offers to call off the pack of vampires hunting her, she agrees to steal an ancient artifact for him. 2015.

1878. The late Barnaby Skye’s biracial son Dirk teaches English to Shoshone children at the reservation school. When Dirk’s student Waiting Wolf has a vision of returning to the old ways, he renames himself Owl and becomes a prophet. But the Indian agent and the army fear an uprising. 2010.

The Rarest Bird in the World: The Search for the Nechisar Nightjar

Birdwatcher chronicles the trip through Ethiopia he was invited on to search for the Nechisar Nightjar, which was identified as a new species of bird in 1990 solely on the basis of one wing. Discusses scientific debate surrounding the identification, the drive of exploration, and his travels through the plains of Ethiopia. 2015.

CIA operative Nathaniel Nash loses his Moscow post after narrowly escaping from a meeting with an important source. New Russian intelligence agent Dominika Egorova is assigned to seduce Nash and identify his contact. Violence, some strong language, and some explicit descriptions of sex. 2013.

To Kill a Mockingbird

Six-year-old Scout and her brother Jem are intrigued by their reclusive neighbor. Meanwhile, their father Atticus, an attorney, defends a black man charged with raping a white woman in their small Alabama town. Some violence and some strong language. Pulitzer Prize. For junior and senior high and older readers. 1960.

Trumpet of the Swan

Louis is a trumpeter Swan who was born without a voice. With the help of a boy who befriends him, Louis learns to read and write–and eventually to play the trumpet, which he finds to be a lovely substitute for having a voice. For grades 4-7. 1970.

Tirtha was the last of the line of Hawkholme, left to carry her family’s destiny alone. Driven by powerful magic to return to her ancestral home, her guide was a Falconer, a man of an ancient warrior race who was also alone in the world, and falconless. Some violence. 1983.

Why Did the Chicken Cross the World?

Journalist examines the history of the chicken around the world. Discusses its origins in southeast Asia, its use in religious and sporting events, its global diffusion, its use in scientific research beginning in the 1800s, and its rise to being the predominant protein source in the twentieth century. 2014.

Yellow Bird: Oil, Murder, and a Woman’s Search for Justice in Indian Country

When Lissa Yellow Bird was released from prison in 2009, she found her home–the Fort Berthold Indian Reservation in North Dakota–transformed by the Bakken oil boom. Three years later, when Lissa learned that a young white oil worker had disappeared from his reservation worksite, she obsessively hunted for clues to his disappearance. 2020.