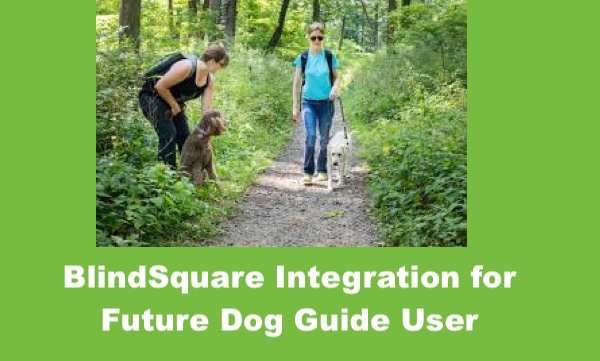 O&M lesson ideas to prepare for traveling with a dog.

My student is 20 years old, moved to her new apartment in downtown Winooski, VT one month ago, and is getting a dog guide at the end of the month. She rarely uses a cane, yet only has ten degrees of vision in her right eye.

My student used to have BlindSquare, but was not familiar in using it and did not have it re-downloaded on her new phone. I asked her to re-download it in preparation. The lesson we executed was to familiarize my student  with BlindSquare and with the route to the downtown woods where she could take her future dog to exercise. On this route there is also a point of interest where the public can grab dog waste bags which are always good to know about if you have a dog!

Because my student is new to her area and has not had a formal O&M lesson with a COMS, we first used the Compass app to better understand the cardinal directions from the doorway of her home. Earlier I had shared the Blind Square pinned point of interest of Downtown Walkway Dog Waste Bags as well as the entrance to the Winooski Woods from the Downtown Walkway. I mentioned that our destination, the entrance to the woods, was south east, which meant that BlindSquare would read 12 o’clock when she was facing south east. I also let her know that on the route would be the first location I shared with her, the Downtown Walkway Dog Waste Bag location.

My student is familiar with the downtown Winooski Walkway, so I had her lead me towards the river that the pathway is adjacent to, using the rushing river as a landmark for the path. We continued along the path until we found the Downtown Walkway Dog Waste Bags. As we got closer to our final destination I asked her takeback out BlindSquare to check her orientation to the location. She successfully used the app to find the entrance of the woods.

For the next lesson we discussed using a tactile map of the woods and going for a walk around them so that she could better learn the loops and pathways of the woods. For future lessons we also discussed downloading the Compass app to familiarize her with the cardinal directions of her area and also learning about the new BlindSquare update more in-depth. I also gave her homework of drafting up a suggestion to BlindSquare in explaining the value of being able to create point of interest folders in order to share routes with different points of interests on them. This in combination with a personal suggestion may from a future COMS, may get them thinking about adding this future. By using BlindSquare in combination with the Compass app, my student will be able to lead a life with more detail, wasting less time trying to find her points of interests as she adapts to this big transitional stage of her life.