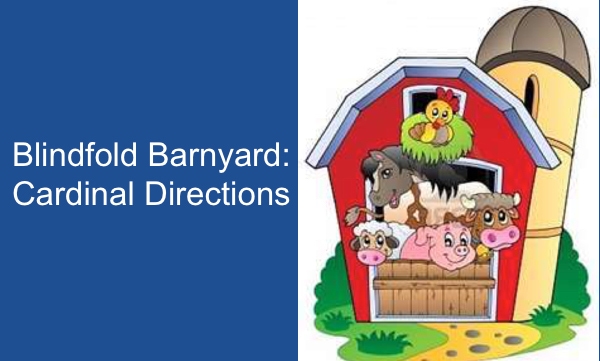 Here is a game to reinforce O&M cardinal direction skills!

Some of you may have played Blindfold Barnyard.  It’s an easy game, where you drag your finger around on the screen until you find an animal, such as a goat, and then drag it to the fence where you’ve dragged other goats.  When you have collected enough goats at the fence, you swipe with 2 fingers to move the animals into a barn.

The challenge is to remember which animals are tied at each fence: north, south, east and west.  If you drag an animal to the wrong fence, all the animals scurry away.  The more animals you collect on a fence, the more points you earn.

Last year, I added a game where there’s a pond in the middle of the barnyard.  When dragging an animal to the fence, you have to avoid the pond, or the animal will drown.  The game fans liked it, and wanted more complexity.

A month ago, I created the variant “Rotating Fences” that’s even harder.  Before the Rotating Fences variant, you simply swiped 2 fingers up to drag the goat to a north fence, 2 fingers right to the east fence, and so on.

In this harder variant, compass directions are rotated 90 degrees clockwise.  What was east, is now north.  What was south, is now east. To drag your goat to the east fence, you swipe 2 fingers down.  Keeping that in your head makes the game quite challenging.  You can set the game to rotate CLOCKWISE, COUNTER-CLOCKWISE or SWAP.

You can get Blindfold Barnyard in the app store.

Editor’s Note: Blindfold Barnyard is a terrific orientation and mobility game to increase cardinal directions – especially when compass directions are rotated! Most students tend to think of North as being directly ahead of them. However, when standing at an intersection, true North may be to their right or in a different direction. Blindfold Barnyard has added a twist – changing where North is located! Can your O&M student play the game when the compass directions are switched?