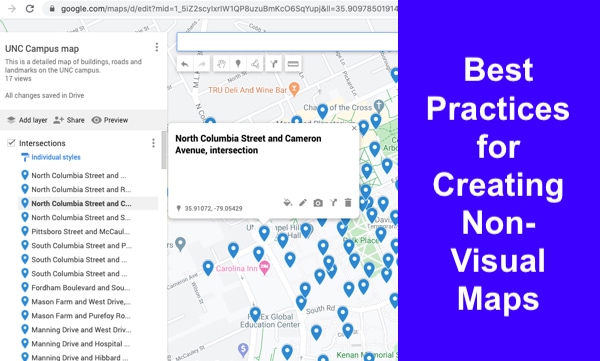 What should or should not be included when creating a non-visual digital map?

O&Ms are off and running with the new non-visual maps, especially during this challenging time of remote O&M instruction! Now that you are ready to create your own non-visual digital map, what points should you include in the map and how should you label these points?

As always, when you create a map for O&M purposes, you want to carefully consider your student/client, their abilities and the goals of the map. The ability to create your own SAS Graphics Accelerator maps is new, so we are all still learning how we can apply these maps to teach O&M goals for various ages and student levels. In this post, we are going to look at the best practices for creating college campus non-visual maps. Students transitioning to or currently in college should have strong O&M concepts and skills. The two main goals of the non-visual digital campus maps are:

The campus map is intended to be used prior to an on campus O&M lesson.

Most O&M students take the approach of “whole to part” approach while other students might use the “part to whole” approach. “Whole to part” involves learning the big picture of the campus (boundary roads, main areas) before learning each part (individual buildings, routes to specific locations). The student who uses the “part to whole” approach may start from one location – such as his/her dorm – and  will learn a specific route from the dorm to the dining hall, then add on another route from the dining hall to the library. In other words, this student learns pieces and then puts those pieces together to start filling in the whole campus. While both approaches work, typically the student who uses the “whole to part” is able to figure out short cuts around campus and often requires significantly less time (and 1:1 O&M instruction) to learn the campus.

How you label the various points is important as these labels will provide critical information!

Layers is a future feature of the SAS Graphics Accelerator. Maps created now should include layers in order to take advantage of this future feature. Layers will provide the user the ability to choose which types of data points will be available. Example: The student may want to learn the streets first before adding the academic buildings, so he/she might chose to only select the Intersections layer. Campus maps should have 3 – 5 layers and these Layer topics may change according to the campus. Common layers for college campus are:

Another good layer might be “Campus Life” which would include things such as dining halls, dorms, theatres, etc.

The University of North Carolina map, for example, has numerous hospital-related buildings and numerous Sports and Recreation fields and buildings; therefore, these two layers were added.