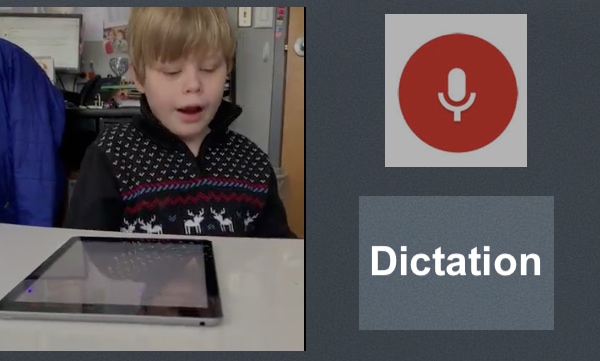 Introducing dictation to an emerging reader and writer.

Students LOVE to hear funny sounds read back to them. For a fun and easy introduction to dictation, have the student say a certain letter multiple times and play it back for them. Let them experiment with different sounds and letters. It is a great way to make the lesson fun and enjoyable for them.

iPad with VO, either PAGES or Google Docs, nursery rhyme or familiar story, what is your favorite…. Questions for high interest

When first introducing dictation, the lessons are short and fun. In order for the student to understand what dictation is, I used a familiar nursery rhyme and dictated into the iPad. Then, I had VO read it back to me. The student was able to make the connection that dictation means speaking into the Ipad and having the iPad write down what I was saying  I then did the same nursery rhyme but spoke quickly and mumbled some of my words. Then had VO read it back.  We talked about what was different and why? This is when we came up with our first dictation rule:  #1: When using dictation, we have to speak slowly and clearly.

For this activity, I asked for the student to listen to any sounds that can be heard before and after as I dictate into the iPad- targeting the tone that activates and deactivates dictation.  Make sure that the student can identify the tone that lets them know they can speak, and the same tone that lets them know that they are done.   Once they can identify the tone, we create rule #2- To activate dictation, we hear a tone that tells us we can speak and we hear the same tone when we are done speaking.

I like to keep talking at the end so that they can make the connection that dictation will continue until you tell it to stop.

Review of rule 1 (When using dictation, we have to speak slowly and clearly) and rule 2 (To activate dictation, we hear a tone that tells us we can speak and we hear the same tone when we are done speaking)  before moving on to teaching the voiceover gesture on the iPad.

With this lesson, I do a conversation type activity where the student will learn to use all the rules while having fun at the same time.

I activate dictation making sure they hear that tone and ask:

“What is your favorite ice cream?” end dictation

Now it is their turn to use dictation by answering the question. Show the student that to activate dictation by using a two-finger double tap and to wait to hear that tone so they know they can speak. Allow them to answer the question and when they are finished they need to stop the dictation by doing the same voice over gesture (two finger double tap) followed by the same tone to let them know it is done. Rule #3: To start and stop dictation, we use the two-finger double tap gesture. This may take a couple of times as the student might not understand all the steps. My experience with Aedan was that he would speak as soon as he double tapped but didn’t listen to the tone. I spent a lot of time asking many “what is your favorite…” questions for practice. Have fun and know that it is a marathon and not a sprint.

In the video below, second grader, Aeden, learns to use dictation on the iPad.

Additional Posts in this Series