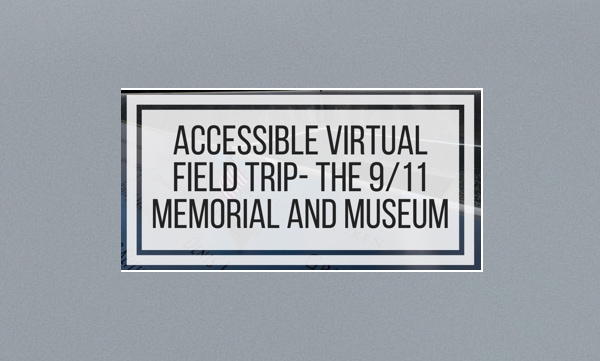 Many things have changed and improved in the years following the September 11th attacks, including airport security, media broadcasting, and the use of digital mapping technology. It’s especially interesting to see how digital mapping technology played a role in developing the 9/11 Memorial and Museum so that people from all over the world could explore the grounds of the museum, even those with vision impairments. Today I will be sharing how to explore the 9/11 Memorial and Museum using virtual reality and audio description. All of the resources provided here are available free of charge.

About the 9/11 Memorial and Museum

The National September 11 Memorial and Museum (also known as the 9/11 Memorial and Museum) is a memorial and museum in New York City that commemorates the September 11th attacks as well as the 1993 World Trade Center bombing. It is located at the site of the former World Trade Center complex, with 110,000 square feet of museum space. The memorial was dedicated on the tenth anniversary of 9/11 in 2011, and the museum was opened to the public in mid-2014. Thousands of people visit the memorial and museum daily to learn more about the attacks and to remember the nearly 3000 victims and all those who risked their lives to save others.

What is virtual reality?

There are several different audio tours available for the 9/11 Museum, including an audio description tour specifically designed for the visually impaired, with audio tracks organized by exhibit. In order to access the audio tours, users must download the museum app and then download the app data after installing- I strongly recommend doing this over wifi because of the large file size. The app is VoiceOver and TalkBack compatible, so users can easily locate the audio description tour and play it as needed. The app is free and can be downloaded for iOS on the App Store here and for Android on Google Play here. Read more about audio description here.

While not all parts of the museum are available, select exhibits are available to be viewed in the Google Expeditions app. I found that this app was perfect for viewing the art and photographs on the walls of the museum, especially the “In Memoriam” exhibit which has wall-to-wall photos of the victims. There are also text descriptions of the individual exhibits that are compatible with VoiceOver and Select-to-Speak. The expedition can be viewed by searching “9/11” in the Google Expeditions app. Read more about Google Expeditions in my virtual reality post here.

An additional virtual reality tour was created that allows users to walk through the exhibit halls and view them at their own pace, though some exhibit areas are blurred out. Luckily, the audio description guide fills in many of the gaps so that users can have a basic visual reference as they listen to the audio description. Check out the virtual tour on Google Maps here.

Touring the memorial with Google Maps

Thanks to a partnership with Google Maps, users can get a 360-degree view of the 9/11 Memorial without any obstructions or other distractions. Using their computer arrow keys or touch screen gestures, users can walk alongside the memorial and zoom in to read the names engraved. The audio description tour is a perfect complement to the memorial, and I enjoyed listening to the descriptions on my iPad as I navigated the tour on my computer. Check out the link to the memorial tour here.

Virtual reality isn’t perfect, and sometimes users want to see a clear image of an artifact without worrying about moving. Thankfully, many high resolution images of museum displays are available on Google Images. Here are my recommended steps for finding the highest quality images:

Users can also search for images from specific sources, such as Time Magazine, by typing site: followed by the website they want to search for. This is a great way to find images that are guaranteed to have alt text- read more about alt text here and read more about high resolution images here.

When I was searching for 360 videos of the 9/11 Museum, one of the things that kept popping up was called “08:46.” This video was NOT created by the 9/11 Museum and simulates the experience of someone inside the Twin Towers on 9/11. The simulation has been condemned as being “sick” and inappropriate, and should not be used as a way to learn more about 9/11, especially in a classroom setting.

It’s amazing to see how many resources have been made available so that people can visit the 9/11 Memorial and Museum from anywhere in the world, even if they are visually impaired. I am highly grateful for the efforts of the 9/11 Memorial and Museum to not only ensure that their museum is accessible for people with vision impairments, but to preserve an important part of history for generations to come.