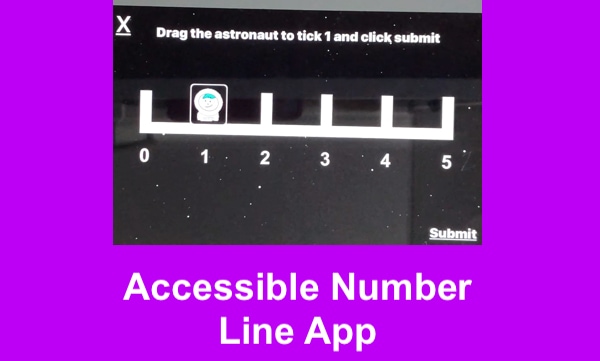 This app addresses the issue of teaching number line concepts in a digital format.

Number lines are a foundation math skill; number lines help students visualize number sequences and demonstrate strategies for counting, comparing, adding, subtracting, multiplying, positive and negative numbers, fractions and so much more! As our classrooms embrace technology, how will students with visual impairments use digital number lines to learn these concepts? Currently, number lines are not accessible with a screen reader.

The video below demonstrates the second level game on the beta version of the Accessible Number Line app.

Similar to other semester long university projects, this app has not been completed and is currently used as a proof of concept. Hopefully, another computer science team will continue on this app in the fall. This beta version is also being used as a proof of concept app to spark discussions with other app developers. The first level of the app (which has not been built out yet) should include an interactive tutorial where the student learns about the number line, how to follow the number line, counting the tick marks, finding the numbers below the line, and learning about the range of the numbers on the number line. The next sequential step would be to find the astronaut on the number line and identify his position on the line.

A big thanks to the student team, grad student mentor, and professor in the Serious Games course and the computer science department at the University of North Carolina for supporting accessibility-related projects!

What skills are you (or mainstream math teachers) teaching your students using number lines? Do you have additional ideas on activities that can be added to the Accessible Number Line game? Do you have cool tricks or tools that you are using to teach tactile number line skills? Please share your experiences in the comment section below!

Do you have a game activity idea that would teach a specific educational concept? Let us know! Or better, yet, contact the computer science department at your local university!

More posts in this series