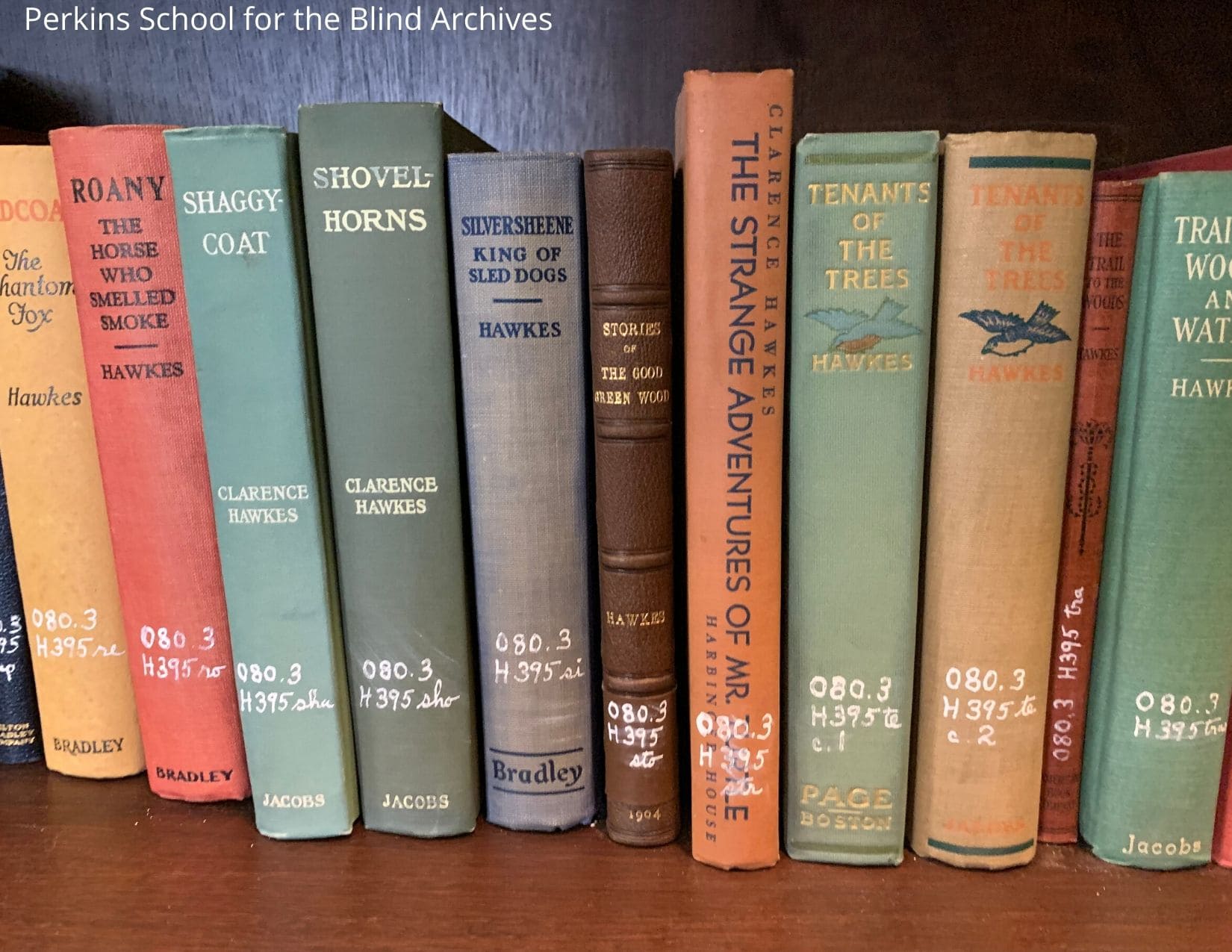 Clarence Hawkes (portrait on Flickr) was born on December 16, 1869 in Goshen, Massachusetts. When he was 13 years old, he lost his sight in a hunting accident and spent two years having surgeries and healing as specialists in Boston attempted to treat his injuries and regain his sight. At the age of 15, he entered Perkins School for the Blind and befriended one of his fellow students, Helen Keller. After he graduated in 1890, he went on to the study of oratory, read laws, and then delved into literary work. He was persistent, but noted in his autobiography that “success in the poetic field was…gained through unremitting toil and with many disappointments…”. Despite having difficulty finding a publisher, he sold a hundred poems during the Depression years. In 1899, Hawkes married Bessie Bell and together they moved to Hadley, Massachusetts. He was said to be an “ardent optimist” with a “remarkable memory, and his brain teems with funny stories and anecdotes” (Keller, 10).  Helen Keller noted that he had “become one of the best known writers upon nature subjects in the country” (Keller, 8).

His first of many nature books was Master Frisky (available on the Internet Archive), a collection of stories about his dog. He wrote about wildlife in New England, “all the facts of which were taken from boyhood experience and memories.” He gradually expanded his field of expertise as his work gained more interest. Hawkes was highly regarded and well respected as his nature writing “employed the most thorough and scientific methods.” He was determined and passionate in his work: “Weeks and months of heartbreaking toil mean nothing to him if he accomplished his aim.” Hawkes published a total of over 100 volumes during his life.

In 1915, Hawkes published an autobiography titled Hitting the Dark Trail (available on the Internet Archive) and described his “three P’s”: patience, perseverance, and pluck. These three factors, he wrote, are the reason for his achievements. His work consisted of “five volumes of poems, and over thirty published nature books” by that point in his life. The autobiography was translated and printed in French to help soldiers blinded in World War I after “discouraged blind Americans” had found it helpful (Keller, 9).

In an essay about Hawkes, Helen Keller wrote that she watched his “first stumbled steps at the Perkins Institute” (Keller, 1). She told a story about Hawkes’ correspondence with Theodore Roosevelt concerning a moose: “When the blind naturalist was writing a book upon the moose, he discovered what he thought was a misstatement in the writing of Theodore Roosevelt…. An interesting correspondence between the blind naturalist and president ensued, and the versatile Roosevelt finally admitted that he was in the wrong” (Keller, 1). Keller declared that “In the field of atmosphere, Mr. Hawkes has no superiors in the realm of nature writing.” She describes his writings as “vivid with color and vital with light and shade.” Like so many others, Keller was enthralled with Hawkes’ “graphic and gripping descriptions of the most illusive phases of nature…” (Keller, 2).

Hawkes noted the influence of his family on his work (Keller, 3). According to Hawkes, it was his grandmother who taught him to “love the birds and squirrels and all the beautiful things which God has made.” His mother told him fairy stories, as well as the Bible and classics. His father taught him “the more strenuous features of out-of-door life.” Hawkes says that his “real love of nature was even deeper and more fundamental than all of this.”

Many of Hawkes’ books are available on the Internet Archive.