One thousand books and counting 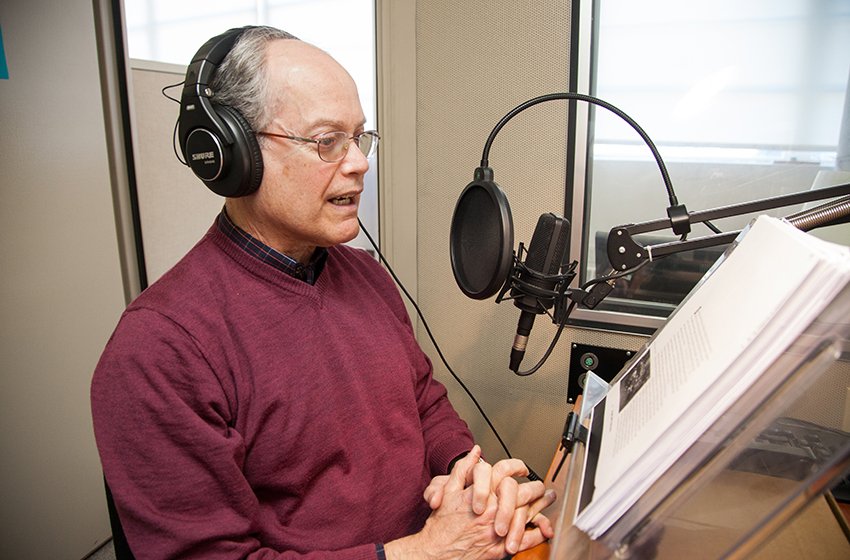 Play them all back to back and it would take an estimated 11,000 hours. Line them all up on a shelf and they would stretch about 83 feet. List all the genres covered and it would range from scrumptious cookbooks to scandalous biographies to brain-teasing presidential trivia.

However, the only meaningful measure of all the books recorded by the Perkins Library – which released its 1,000th digital audio book last month – may be the countless hours of entertainment and joy they bring to library patrons.

“It’s a great milestone,” said studio manager Todd Smith. “We’re proud to have provided so many high-quality digital books for our patrons in Massachusetts and all over the country.”

In March, the Perkins Library recording studio celebrated the production of its 1,000th digital talking book, recorded on state-of-the art equipment for readers who are blind or visually impaired.

For its 1,000th book, the studio produced The Race Underground: Boston, New York, and the Incredible Rivalry that Built America’s First Subway System by Doug Most. It’s now available to be checked out on digital cartridge or downloaded by Library patrons.

“The fun ones kind of surprise you,” he said of the assignment. “It’s a fantastic book – it’s about two brothers, one’s in New York and one’s in Boston, who get involved with funding and arranging the two subway systems. It’s a race to find out who’s first – 100 years ago.”

Morse is one of 60 volunteer narrators who help the Perkins recording studio fulfill its mission of providing accessible books for patrons who have a disability that keeps them from enjoying traditional print. It’s a mission that hits close to home for Morse, whose mother lost her vision later in life.

“She was a big user of recorded books,” he said, adding, “I think she would have appreciated the switch to digital versus the (older cassette) tapes.”

“There are so many authors of all stripes who live in the area,” said Smith. “We’re really lucky to have so much local material to choose from.”

Volunteers work in teams of two, one narrating while the other listens for errors just outside the booth. When recording is finished, editors clean up the digital files and reviewers compare them to the written texts so any errors can be fixed.

The finished audio books are then checked out or downloaded by library patrons like Dean Denniston, who lost his vision as a young adult in graduate school. Denniston relies on digital talking books and audio versions of newspapers and magazines for pleasure reading and staying apprised of current events.

“I read more than 100 books a year,” he said. “Whether you read with your eyes, your hands, your ears, or any combination of these, reading opens pathways to knowledge, adventure, information, relaxation and connection.”