The Perkins community gathers to celebrate the opening of a new accessible park by the Charles River in Watertown. 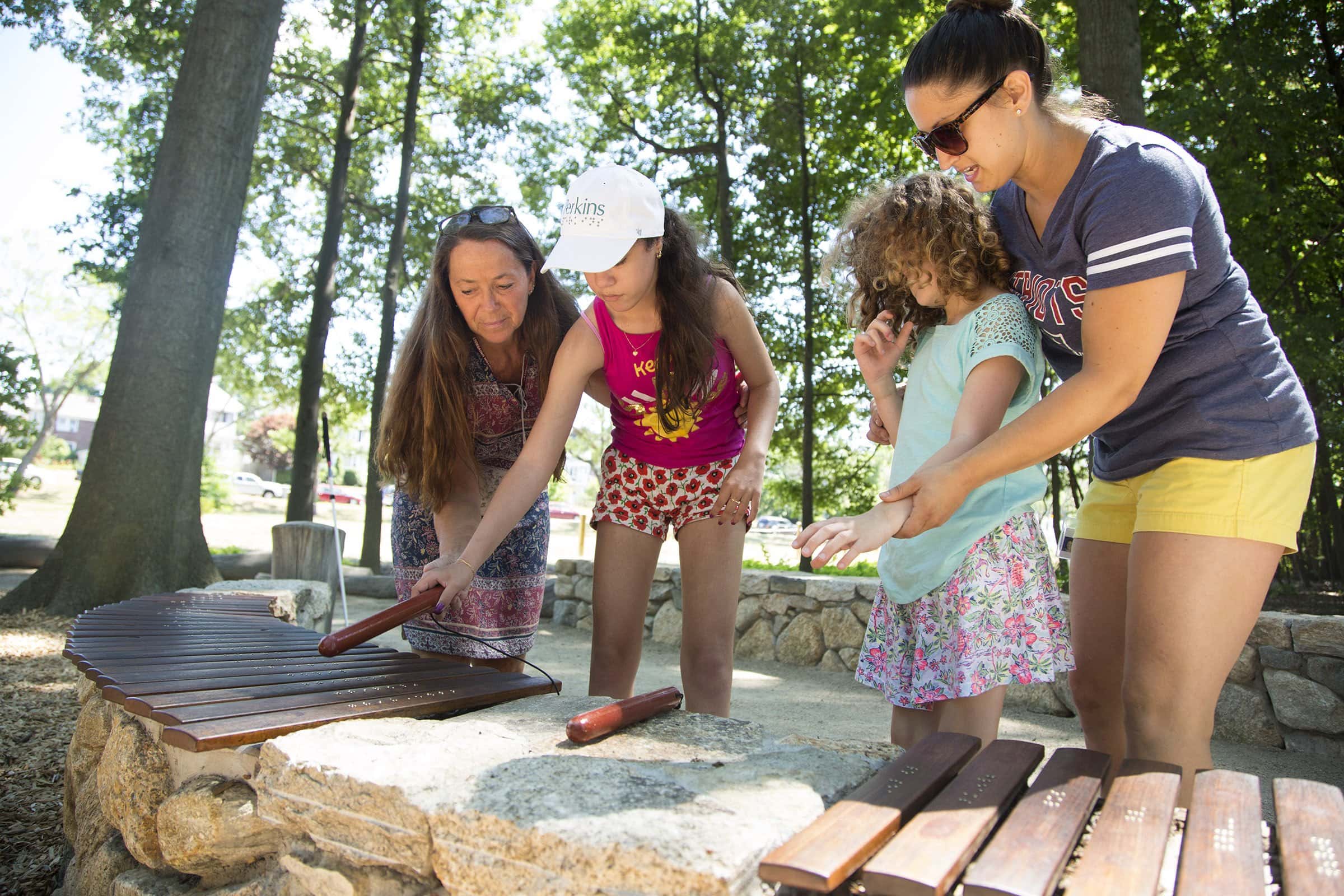 State and city officials joined the Perkins School for the Blind community on Thursday to celebrate the grand opening of the Watertown Riverfront Park and Braille Trail – an accessible garden and walking path that will allow people who are blind to more easily enjoy nature and explore the banks of the Charles River.

“We’ve been waiting for this day for a long time,” said Perkins President and CEO Dave Power. “This park is going to be incredible for Perkins students – it’s a place to come and experience wildlife, to get some exercise, and frankly, just to have some fun.”

The new park, which is only a few hundred feet from the Perkins campus, features a quarter-mile path equipped with a guide wire, allowing people who are blind to navigate independently. Along the way, granite markers provide interesting facts about the area in both print and braille. Visitors, blind or sighted, can read about Native American artifacts discovered nearby and the various species of fish that populate the Charles.

In addition to the braille markers, wooden blocks along the guide wire alert visitors to points of interest, whether it’s a granite bench on which to relax or the tactile fossil of a spotted salamander. The trail leads to a sensory garden with boat-shaped benches and a wooden xylophone marked with braille notes.

“It’s truly yet another gem along the beautiful gem of a river we have here,” said Secretary Matthew Beaton of the Executive Office of Energy and Environmental Affairs. “We are very fortunate.”

The creation of the waterfront park was led by the state Department of Conservation and Recreation (DCR), which worked in collaboration with Perkins and other stakeholders to design a space that would be accessible and enjoyable to visitors of all ages and abilities. Funding for the project came from a variety of public and private sources.

“So many people came together to make this wonderful place,” said DCR Commissioner Leo Roy. “(It) is celebrated here today but will be celebrated and used and enjoyed really by generations to come.”

Once the ribbon was cut, Perkins students fanned out to explore the park’s many features, clambering into the wooden boats and running their fingers along the braille labels. Lower School student Kathely, 11, sang along as her classmate Doryan, 8, played a lively tune on the xylophone.

“This park is the backyard to the Perkins campus,” Power said. “We’re going to really be out here using this.”

Perkins alumni were especially impressed by the new park.

When Karen Crowder was a student at Perkins in the 1960s, students rarely walked along the banks of the Charles River. The paths that existed were poorly maintained, the asphalt crumbling along certain stretches.

On Thursday, Crowder and her fellow alumni ambled along the shady trail, stopping to read a braille marker about the variety of birdlife in the area.

“This would be a great spot to have lunch or something,” said Bob Hachey, tapping his white cane against a wooden platform built along the river’s edge.

The group chatted briefly with Herb Nolan of the Lawrence and Lillian Solomon Foundation, which helped fund the project, before heading on their way.

“We’ll be back!” Crowder said.

From problem to solution in 24 hours