Michael Anagnos’s long commitment to education and the love of knowledge was responsible for key moments in Perkins history including introducing Anne Sullivan to Helen Keller, expanding education for students who were deafblind, and founding the first kindergarten for the blind in the United States. 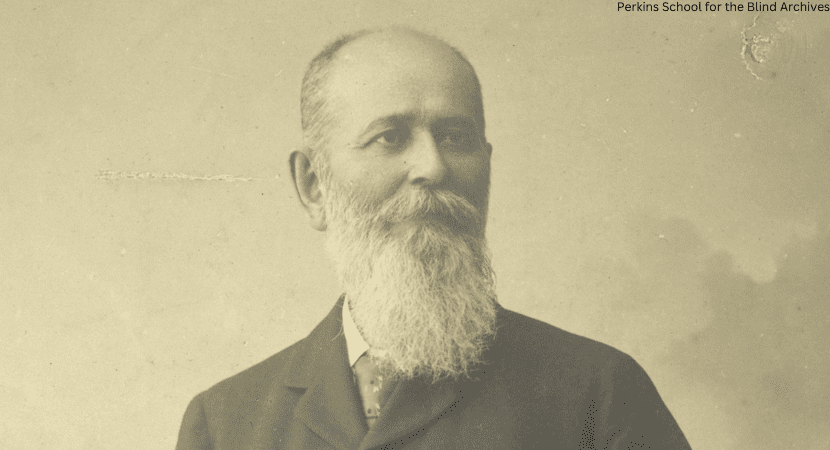 Michael Anagnos was born Michael Anagostopoulos on November 7th, 1837 in Papingo, a small mountain village in northwestern Greece. His father was a farmer and shepherd who deeply valued education. At this time, Greece was under Ottoman rule, but the village was largely left alone by the occupying government. Florence Howe Hall tells a story after his death of how he would copy out textbooks by hand, because the family was too poor to buy them, and study them while tending his father’s flocks on the hillside. (Michael Anagnos, p. 21)

Anagnos attended high school in Ioannina, the largest city in the region of Epirus. When he turned nineteen, he traveled to Athens to attend the National and Kapodistrian University, where he studied Greek, Latin, French, and philosophy, intending to become a political scientist and journalist. Hall shares another story he told about four students who lived together with one good coat between them, so that they would have to take turns going out. She always suspected the four included Anagnos himself. His experiences with frugality and practicality stayed with him through his life.

His hard work and gift for writing led to a position as a writer for the Ethnophylax, a daily Athens newspaper where he later became editor-in-chief. He became active in deposing King Otto, then king of Greece, in 1862. By 1866, the paper supported the annexation of Crete, which had risen in revolt against the Ottoman Empire. Anagnos disagreed, supporting Crete’s independence, and he left the paper as a result.

It was this support for Crete that brought Anagnos into connection with Samuel Gridley Howe. Howe, the founding director of Perkins, had fought and provided medical assistance during the Greek revolution in the 1820s. Howe had been director of Perkins since 1831, as well as founding the Massachusetts School for Idiot and Feeble-Minded Youth, the first school for children with intellectual and cognitive disabilities in the United States in 1848.

In 1867, Howe returned to Europe to support fundraising for Cretan refugees in Athens, and also to visit and learn more about schools for the deaf and what were then known as institutions for the insane. Howe had become chairman of the Massachusetts Board of State Charities in 1865 and the board was actively considering how best to support these two groups. In May 1867, Howe hired Anagnos as his secretary.  In that role, Anagnos organized relief for the war effort, as well as taking charge of the Cretan Committee’s work in Athens. Howe had to return to the United States, but invited Anagnos to come to Boston and continue his work for the Cretan Committee in 1868.

When Anagnos arrived in Boston, he was 31. He initially worked as a tutor for the Howe family, as well as teaching Greek to some students at Perkins and at colleges in the Boston area. In 1870, Anaganos asked for a letter of recommendation to teach at a college in Ohio. As Sanborn quotes  in his memorial biography (Michael Anagnos, p.106),  Howe wrote the letter,  saying “He is a thoroughly honest man. He has uncommon natural gifts, and has improved himself by a pretty road culture.” going on to add “Personally, he is a modest, amiable, and agreeable man; and he would, I doubt not, be popular among students.” However, Howe promptly offered him a permanent position as a teacher at Perkins to keep Anagnos in Boston.

Others of the Howe family also were very fond of Anagnos, and permanent employment wasn’t the only reason Anagnos stayed in Boston. Later in 1870, Anagnos married Julia Romano Howe, the eldest daughter of Samuel Gridley Howe and his wife Julia Ward Howe. Contemporary sources are clear that the marriage meant Anagnos was positioned to be considered as a successor for Howe when the time came.

Anagnos quickly became essential to the smooth running of the school. Howe’s age and declining health by this point meant that an active, capable, and loyal assistant was key. Anagnos had full responsibility for the day to day running of the school when Howe traveled, and became familiar with every aspect of the school and its methods. He became Acting Director when Howe became seriously ill in 1875. At Howe’s death in 1876, he was the only candidate seriously considered for the post, as Franklin Sanborn, a longtime friend of the Howe family and fellow member of the Massachusetts Board of State Charities outlines in his detailed biography of Anagnos.

Sanborn says, “Every branch of the Institution had already begun to feel the youthful energy and the mature wisdom of the new Director.” (Michael Anagnos, p. 11.) Anagnos focused first on improving the department of printing, increasing the printing fund to $100,000 (over $2,780,000 today), allowing for the printing of a much wider range of books.

The need for a kindergarten

Beginning in 1880, Anagnos and his wife turned their attention to the idea of a kindergarten. At the time, there were no schools for younger children who were blind in the United States as most schools required students to be nine years of age or older. Julia Anagnos was particularly interested in the well-being of younger children, and together they made plans for a school that would best support their learning.

Julia Anagnos unfortunately died at the age of 41 in 1886. Her last words were reportedly “Take care of the little blind children.” (Michael Anagnos, p. 111.) By all accounts, Anagnos deeply mourned her for the rest of his life. A piece in the Boston Globe in 1906, quoted in Franklin Sanborn’s book, says: “When speaking of her to his friends it was as one who relates a sweet day-dream that is all too quickly told to those who enjoy to listen.” (Michael Anagnos, p. 68.)

The Kindergarten opened with ten children in Jamaica Plain in 1887. This was a separate location from the main school which was still at South Boston. The campus had a large building for children to live, with classrooms in the same building and playground equipment and space to play and move freely outside. By 1906, the Kindergarten had grown to 118 children (with another 171 in school in South Boston), with additional buildings and teachers.

Anagnos is particularly known for his association with Helen Keller, which led to a significant expansion of teaching for deafblind students. Anagnos knew, of course, of Samuel Gridley Howe’s work with Laura Bridgman and with other deafblind students. In the summer of 1886, two events came about that brought deafblind education to the forefront again.

Anne Sullivan graduated from Perkins in 1886 as the class valedictorian. She had come to Perkins in 1880 with no previous education. That summer, when she was considering future plans, the Kellers wrote to Perkins seeking a teacher for their daughter Helen. Sullivan spent a semester studying Howe’s notes as well as talking with Laura Bridgman herself, as Bridgman was still living and working at the school. In the spring of 1887, she traveled to Alabama. Sullivan and Keller spent extended periods of time at the school over the next few years. Unfortunately, controversy over a story Keller wrote for Anagnos for his birthday led to Keller being accused of plagiarism and ended Keller’s time as a student at the school.

During this time, several other deafblind students came to Perkins. These included Willie Elizabeth Robin and Edith Thomas. A few years later, Keller herself was instrumental in raising funds to bring Tommy Stringer to Perkins. The support Anagnos gave to these students who were deafblind was considered his greatest achievement by many, in a life full of significant achievements.

Anagnos shared his thoughts and experiences widely, both in school publications and correspondence, and through a number of books and publications. His thoughtfulness in the Annual Reports of the school and in correspondence and conversations with other schools for the blind are echoed in many of the memorial comments, speaking of his “extensive reading and profound thought and observation”.  (Michael Anagnos, p.84.)

Besides his work at Perkins, Anagnos built strong connections throughout the Boston area, supporting educational projects and Greek immigrants, as well as helping start Orthodox churches. He became close friends with Evangelinos Apostolides Sophocles, a noted professor of classics and modern Greek at Harvard University. In 1892, Harvard granted Anagnos an honorary A.M. degree.

In 1899 and 1900, Anagnos traveled extensively in Europe. In Greece, he met with Queen Olga, who was intensely interested in Helen Keller’s life and education. He attended the International Congress of Teachers and Friends of the Blind, representing both Perkins and the United States as a whole.

Throughout his later life, he actively supported Greek education through large financial contributions, including establishing schools in Papingo, and through founding or participating in a number of Greek organizations and groups.

In 1906, at the age of 69, Anagnos returned to Greece for a long visit. He had been struggling with chronic kidney disease for some time. He and others felt a substantial rest away from his ordinary daily work would be helpful. Anaganos began by attending the Olympic Games held in Athens that April and May. Sanborn says, “he found much enjoyment in revisiting the scenes of his youth and the land of his heartiest affection.” (Michael Anagnos, p. 18.)  From there, he traveled through Turkey and Roumania, where he was upset by the way Greeks were treated in those countries, and became a subject of official suspicion by the Turkish government. His illness returned, and unfortunately he died on June 29th, a few days after emergency surgery. He was buried in Papingo.

For many years, Michael Anagnos was honored in early November by the Kindergarten and Lower School. More recently, the celebrations have become Founders Day, recognizing the history of the school.

Enrolment of Blind Persons. Seventy-Fifth Annual Report of the Trustees of the Perkins Institution and Massachusetts School for the Blind. 1906, p. 51.