Meet the parents of kids who are blind

Faced with unexpected challenges, sighted parents become ‘eyes’ and advocates for their children. 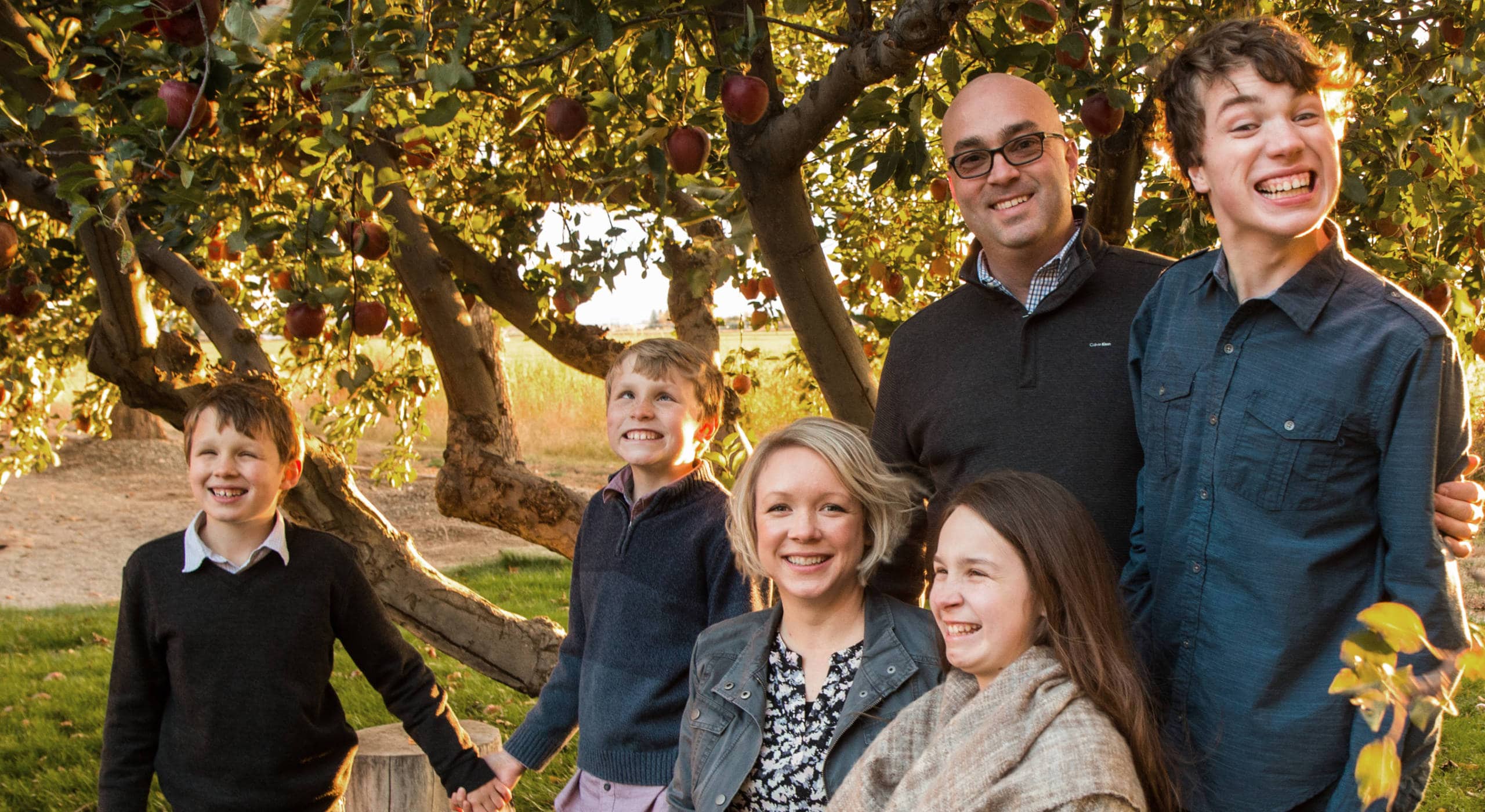 It started out as an unremarkable stroll around the neighborhood. Andrea Bloch was walking with her son, Jack, who is blind, on their usual route and had just turned off their street.

But when a man pulled up and asked for directions to the local gardening center, Jack astounded both the stranger and his mom.

The 10-year-old boy with the white cane confidently rattled off turn after turn, telling the man how to get to his destination.

It was a testament to her years of description for Jack. Every time they got in the car or walked down the street, she’d narrate every turn for him. Jack, with his strong sense of direction, built himself a mental map.

For many parents, finding out their child is blind is the first time they’ve encountered a person who is visually impaired. They’re plunged into a complicated world, learning about teachers of the visually impaired (TVIs) and orientation and mobility (O&M) specialists and understanding the importance of braille literacy and assistive technology.

They change their lives in ways big and small. They might uproot their families for a better education or buy new tactile and audio-based toys. Like Bloch, they learn to “see” out loud, becoming their child’s eyes by describing their surroundings. They also become full-time advocates for their children, fighting through bureaucracy and ignorance to create a more accepting world.

“A lot of people don’t feel comfortable doing that at first,” said Bloch. “But you have to push yourself to work hard for your kid. You have to constantly be an advocate for your child, and teach them when they’re older how to advocate for themselves. Because it will make a difference in the long run.”

Opening up about blindness

For Jessica Rojas, even something as basic as taking her 5-year-old son, Cameron, to a birthday party, used to be a struggle.

He’s blind with limited hearing, so crowded rooms would overwhelm him. Well-meaning aunts and uncles and cousins would try to get him to join in on games and activities – but he would just tense up and withdraw.

But today, Cam is a bubbly little boy. He’s always flashing his bright grin and letting out yelps of joy at school, reaching out to explore the world around him. He’s traveled to Jamaica and Mexico – and even shaken hands with the mayor of Boston.

Rojas credits his teachers and therapists at the Deafblind Program preschool at Perkins School for the Blind, who have built his confidence by teaching him essential communication skills like sign language.

As a single mom, the support she’s received from Perkins has been invaluable – from not only the staff, but the parents she’s met at conferences and events.

“There’s such a big community of people who want to help. We’re all a big blind family,” she said.

Cam became deafblind after suffering a traumatic brain injury when he was 4 months old. He lost his vision, much of his hearing and function on the right side of his body.

When she brought Cam home from the hospital, Rojas had to adjust to her new reality. She worked with a TVI from Perkins to buy the right sensory toys for him. She rearranged furniture and cleared hallways in the house they share with her mom and sisters to make sure he was safe (especially after he regained some mobility from working with Perkins therapists). She learned to handle stares and questions whenever she and Cam went to run errands.

But she’s embraced all of it. As a parent, her goal is to share her and Cam’s journey as much as possible.

“Cam really fills people’s hearts. I get a lot of love when we’re out and I’m very open about his blindness,” she said. “A lot of people are ignorant about it, so I invite them to ask questions and learn more.”

Tina and Jarom Turner’s four children were born with Stargardt disease, which caused them to lose their vision by the age of 6. Today, Davis, 15, Ashlyn, 14, Brock, 11, and Clint, 9, go to public school in Quincy, Washington.

It’s been 10 years since Tina and Jarom Turner got the news that would completely change their lives.

One by one, they watched as their daughter and three sons – all born sighted – rapidly lost their vision as the result of Stargardt disease, a form of inherited juvenile macular degeneration. By age 6, the four children were blind with only light perception.

“At the beginning, it was pretty rough,” said Tina. “It felt like the doctor gave us a diagnosis and said goodbye. It was completely out of the blue for us as a family.”

“We watched our children lose their independence. They went from being able to play normally to you having to be there to make sure they’re safe,” she said. “But once we started down that road of acceptance, we started finding new ways to cope and embrace this new life.”

Today, Davis, 15, Ashlyn, 14, Brock, 11, and Clint, 9, are all in public school in Quincy, Washington, with encouraging classmates and teachers in their small farming community. They work with a TVI and an O&M instructor, and each child has an individual teaching assistant.

That’s the result of the Turners’ tireless advocacy and collaboration with the local school district – something all parents of children who are blind have to take on. The family tried at first to make things work in Colorado, where the children were born. But administrators there weren’t willing to teach the children braille or how to use a white cane because several of them have multiple disabilities, including autism and seizure disorders.

The family decided to move back to Tina’s hometown, where the support of family and friends has made it possible to integrate the Turner kids into the community. For example, they’ve taken trips to a wind farm and the local railroad station, getting special permission to touch the wheels and tracks.

In this welcoming environment, every child gets a chance to shine. Davis charms neighbors with his outgoing attitude. Ashlyn shares her love of Justin Bieber and Disney. Brock is his parents’ little helper, emptying the dishwasher and learning to mow the lawn. Clint tells tales about his favorite dinosaurs.

“I really encourage parents to involve their children as much as possible in normal activities,” Tina said, from doing chores to riding bikes to catching tadpoles. “I used to think, ‘Oh, that’s too dangerous.’ But then they would do it and I realized I’m the one holding them back.”

Jack shows off his National Honor Society certificate with his parents, Andrea Bloch and Bill McPadden.

Today, 17-year-old Jack earns straight A’s at his public high school. He navigated independently from his home in Winchester, Massachusetts, to Copley Square in Boston earlier this year, taking a bus and two subway lines. He even attended a three-week residential life skills program this summer at Perkins.

His parents couldn’t have imagined any of this when he was 9 months old, diagnosed with a stage 4 neuroblastoma. The cancer caused him to lose his vision.

But the moment he was able to start his education, his natural talents blossomed.

“So many times, I was blown away,” said Bloch, from when he started reading and typing in braille during kindergarten to when he was inducted into the National Honor Society last fall.

Bloch and her husband, Bill McPadden, set Jack up for success. They labeled objects throughout the kitchen in braille and created “story boxes” of tactile materials that illustrated the topics in different books, modeled after those provided by his Perkins TVI. They encouraged him to physically explore his surroundings, from tunnels on the playground to caves in New Hampshire.

“Every time he does something to increase his independence and skills, it makes me very hopeful that we’re going to get where we want to be: living independently and productively after college,” said Bloch.

Along the way, there have been challenges, like balancing her time between Jack and her sighted daughter, since it takes more effort to make sure Jack’s needs are met. Bloch had to accept that as Jack got older and outgrew playdates, he would need to make new friends on his own. It’s tricky, since Jack often finds it easier to socialize with adults than his peers.

Throughout these challenges, Bloch has leaned on other parents for support – she considers the moms she met through Perkins’ Infant-Toddler Program to be some of her best friends – and hopes other parents can learn from her experiences.

“A friend told me, ‘It’s not a sprint, it’s a marathon,’” said Bloch. “When Jack first lost his vision, I was trying to do everything to learn about blindness and it was very stressful and exhausting. Pace yourself and leverage all the resources out there. You don’t have to be the perfect parent. Just do the best job you can.”

Why this family continues their support after 40 years