By writing a story about a young girl’s opportunity to get educated at a school for the blind, Alcott raised awareness and raised funds for what would become the first Kindergarten for children who are blind. 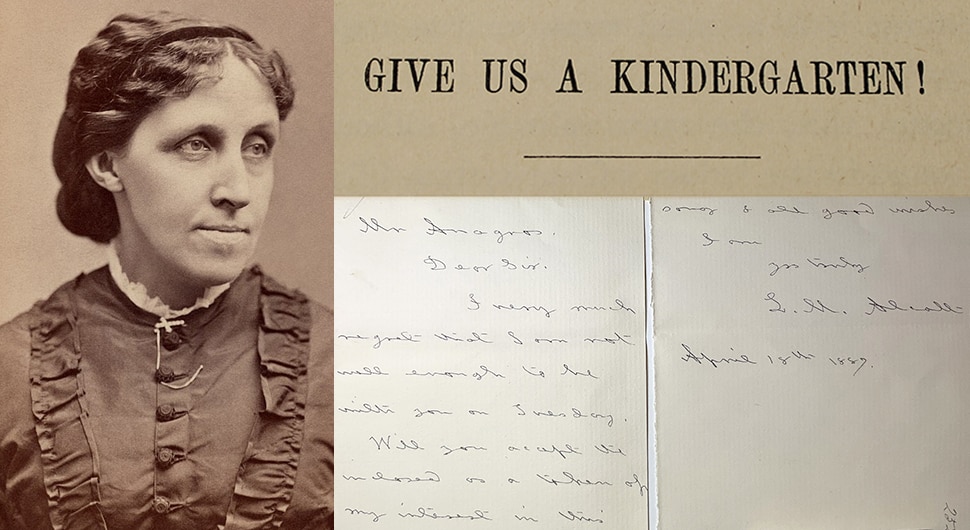 In November of 1886, “The Blind Lark” was published in the popular children’s periodical St. Nicholas. It was written by Louisa May Alcott, by then famous for writing Little Women. The story was inspired by the work being done by the Perkins Institution, now known as Perkins School for the Blind. Its’ publication raised money to help fund a Kindergarten, the first of its kind for children who are blind. This connection between Alcott and Perkins can be found in Perkins’ archival materials related to the cause of the Kindergarten, but Alcott wasn’t the only one in her family to have a connection to Perkins and its mission.

For decades, Perkins accepted only those pupils who were “older than nine and younger than nineteen” (McGinnity et al., “Kindergarten”). Knowing the value of early education, Perkins’ Board and its second director, Michael Anagnos, sought to create a kindergarten where younger children would become better prepared as students and gain more independence. Anagnos is remembered for his fundraising and his championing of the cause (Centenary, 30). He did not act alone, however, and with the aid of Perkins staff, many of them alumni, and donors that ranged from school children to well-known figures of the late 19th century, the first kindergarten in the world for children who were blind was well on its way.

Louisa May Alcott was a great supporter of social causes, including abolition and women’s suffrage. Twenty years after Little Women was published she was eager to help establish the Kindergarten for the Blind. To raise funds, she wrote a story, “Blind Lark,” sold it to the children’s magazine, St. Nicholas, and donated a total of $225 to the building fund (“Proceedings at the Dedication” 83). In a letter to Anagnos written February 3, 1886, Alcott wrote, “Having at last been able to write the promised story for St. Nicholas I send the proceeds of it as my little contribution to the Kindergarten fund, wishing it were a million instead of a spinster’s mite. I am very glad to hear that things are going well and that people are interested in this sweet charity” (Alcott 1886). At the Kindergarten’s 50th Anniversary, it was also reported that “​​Louisa Alcott read original manuscripts to friends in order to enlist their support to the new enterprise” (“Perkins Institute”).

“The Blind Lark ” is about Lizzie Davis, a nine-year-old girl who was blind and living in poverty in a Boston tenement. She is pitied, but her singing voice is heard by a visitor who lets her know that there is a place she could find such things as “work and play, health and happiness, love and companionship, usefulness and independence” (Alcott, 14). This kindergarten, the “Flower Mission,” doesn’t have enough funds to open so she waits until she is old enough to attend the school for children who are blind. Once there, she is given the opportunity to get an education and, through a fundraising concert, her singing talent helps raise the remaining funds so that the Kindergarten can finally be opened. As author Mary Klages later observed, “‘The Blind Lark inscribes Lizzie not only as empathic object, but as agent, someone whose selfhood is defined by her ability to ‘truly help’ rather than always be a burden” (Klages, 186).

The dedication of the Kindergarten was held on April 18th, 1887. The day’s activities included a student performance of, “The Blind Lark’s Song,” the song sung by Lizzie in Alcott’s story. There was also a reading of the original story and the lyrics to the song were printed in the program (Dedication, 11). A correspondent for The Christian Union reported that, “when a chorus of little girls sang ‘The Blind Lark’s Song’ by Louisa M. Alcott, one of the boy pupils sitting near me remarked, ‘I don’t believe there is another chorus of girls In Boston, of their ages, who could beat that’” (“In and About Boston” 20-21).

In a letter written to Anagnos on April 18, 1887, Alcott wrote, “I very much regret that I am not well enough to be with you on Tuesday. Will you accept the enclosed as a token of my interest in this [wonderful] charity? With thanks for honor done my little song & all good wishes” (Alcott 1887). Alcott passed away less than a year later on March 6, 1888.

For the years 1886-1887, “Alcott, Miss Louisa M., Concord,” is listed as a member of the Perkins Corporation. This distinction was for “all persons who have contributed twenty-five dollars to the funds of the Institution, all who have served as trustees or treasurer, and all who have been elected by special vote” (“Members” 8). Alcott was not the only one in her family that was part of this corporation.

Alcott’s great uncle on her maternal side was Samuel May (1776-1870). May was a trustee of Perkins from the school’s founding until 1869. May also served as President of the Corporation from 1861-1869 and May Cottage on the Watertown Campus is named for him. It has been noted that May took a special interest in the production of embossed books for people who are blind (Stuckey 5).

In 1904 the Women’s Educational and Industrial Union reported that the Orchard House, the Alcott’s home in Concord, Massachusetts,  which had been “empty for years” was for sale and should be “preserved by women, and for women” (“Report on the Committee 29). The hope was that it would be used as a “home for sightless women who need some means of self-support” (“Planned Purchase” 10). The Louisa May Alcott Memorial Association ended up purchasing the home and opened it up to the public in 1912. It remains a popular destination for Louisa May Alcott fans from all over the world.

In an Oct. 11, 1888 newspaper article reporting on the 57th Annual Meeting of Perkins Trustees, Alcott is mentioned in a list of notable members who had died (“Little Blind”). That same article documents a guest at the board meeting, Helen Keller, who had arrived at Perkins in September of that year to further her education at Perkins. In 1891, Keller was reported to have visited the Orchard House, stating, “It is not beautiful; but I love it for the sake of brave loving miss Alcott” (“With the Abbot Girls” 39).

Today Perkins Archives holds several copies of Little Women published by Perkins in 1890. They fit in three large volumes, printed in Boston Line Type, the embossed writing system developed at Perkins and used until 1908, when it was officially replaced by braille (McGinnity et al., “Reading and Writing”). Little Women was also performed by the Girls Department of Perkins Upper School as part of a dramatic interpretation in a reading course in 1914 (“Report of the Trustees” 20-21). Final examinations were performances for an audience. While Alcott’s most famous work has left its mark on school resources and activities, it’s her involvement with the Kindergarten fundraising that has left a lasting legacy that is still felt today.

Further reading about the Kindergarten

Further reading about Louisa May Alocott and the Orchard House

The Centenary of Michael Anagnos and the Semi-Centenary of the Kindergarten, 1937. Digital copy on the Internet Archive.

“Dedication of the Kindergarten for the Blind.” Program, 1887, pp..8-11. Kindergarten Scrapbook of Newspaper Clippings 1887-1889. Digital copy on the Internet Archive.

“Members of the Corporation.” Annual Report of the Perkins Institution and Massachusetts School for the Blind for the Year ending September 30, 1886, 1887, p. 8. Available on the Internet Archive.

“Planned Purchase of the Alcott Residence as Home for the Blind.” Boston Transcript, 26, April 1904, p. 10. Scrapbook of Clippings with articles on Blindness April 1904-Oct. 1904. Digital copy available on the Internet Archive.

“Report of the Committee on Ethics.” Women’s Educational and Industrial Union Report for the Year Ending in April 1904, p. 29. Perkins School for the Blind Bound Clippings: Massachusetts Adult Blind, 1886-1906. Digital copy available on the Internet Archive.

Stuckey, Kenneth A. “Perkins School for the Blind Trivia Questions and Answers,” About Perkins Compiled by Kenneth A Stuckey, 1988, p. 5.