Laura Dewey Bridgman was the first student with deafblindness to be formally educated. She and Perkins' founding Director Samuel Gridley Howe became world famous for this achievement. 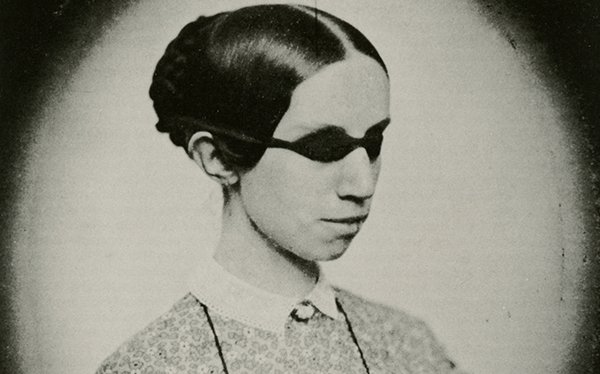 Laura Dewey Bridgman was born in Hanover, New Hampshire, on December 21, 1829, to hardworking New England farmers. At the age of 24 months, she fell ill with scarlet fever for many weeks and lost her sight, hearing, sense of smell, and nearly all of her sense of taste.

Communication between Bridgman and her family was very limited. She developed a rudimentary sign language, but as she grew older she frequently had temper tantrums, and by the time she was seven she could be controlled only by being physically overpowered. Her father was the only family member she would obey.

Five years after the Perkins School for the Blind opened its doors, Director Samuel Gridley Howe heard about Bridgman and was eager to try educating her. In that era, people who were deafblind were considered hopelessly unreachable.

Howe traveled to Hanover, New Hampshire, and easily convinced her busy family that Laura Bridgman’s best chance lay in going to Perkins School for the Blind. She arrived at the school in October of 1837, 11 weeks before her eighth birthday.

No one had succeeded in teaching language to someone who was deafblind, and Howe was now faced with creating a method of education. Instead of expanding upon Bridgman’s natural sign language, he decided to teach her English.

He gave her familiar objects, such as forks and keys, with name labels made of raised letters pasted upon them. When he gave her detached labels with the same words, she matched them with their objects. However, Howe could tell that “the only intellectual exercise was that of imitation and memory.”

Howe next cut up the labels so each letter was separate. He spelled the now-familiar words, showed them to Bridgman, then jumbled the letters. She was able to rearrange them so they once again spelled the words. According to Howe, it was at this point that Bridgman grasped the concept of language and communication.

From the moment she understood that objects have names, Bridgman eagerly demanded to be taught the name of everything she encountered. During the next year of her education, her teachers focused on expanding her communication skills and vocabulary.

Once she mastered language, her curriculum became much like that of the other pupils at Perkins, and she attended classes and studied reading, writing, geography, arithmetic, history, grammar, algebra, geometry, physiology, philosophy, and history.

Known around the world

Howe published the account of Bridgman’s education in the Perkins Annual Reports, making both teacher and student internationally famous.

In 1842, British writer Charles Dickens visited Perkins and wrote of his encounter with Bridgman in his book, American Notes. Dickens described the twelve-year-old girl in sentimental terms, dwelling upon her innocence and childish beauty, and likened her to a prisoner liberated from a vault of isolation. This effusive praise increased her celebrity and popularity throughout the world.

Bridgman’s instruction at Perkins ended in 1850 when she was 20, and she returned to New Hampshire to be with her family. After years of being with a constant teacher companion, Bridgman was suddenly on her own day and night, and her busy farming family had little time or patience for her.

Her health began to deteriorate, and Howe realized that Bridgman should return to Perkins. He and Dorothea Dix, Bridgman’s friend and advocate, raised an endowment to ensure that she would have a permanent home at the school. Although she often spent summers with her family in New Hampshire, Bridgman lived at Perkins School for the Blind, her “Sunny Home,” for the rest of her life.

Bridgman’s adult life at Perkins was busy. She lived in one of the four cottages with the students and did her share of the housework. Bridgman read a great deal in her free time, principally from the Bible. She sold her needlework pieces, delighting in having money to give gifts to her friends and contributions to the poor.

She was an enthusiastic letter writer throughout her life and sometimes traveled to visit friends and relations. For a Victorian woman of this time, Bridgman lived a comfortable life.

When she was 59, Bridgman became ill. After several weeks, she died peacefully at Perkins on May 24, 1889.