How the eyes work

Understanding ocular conditions that can occur with CVI 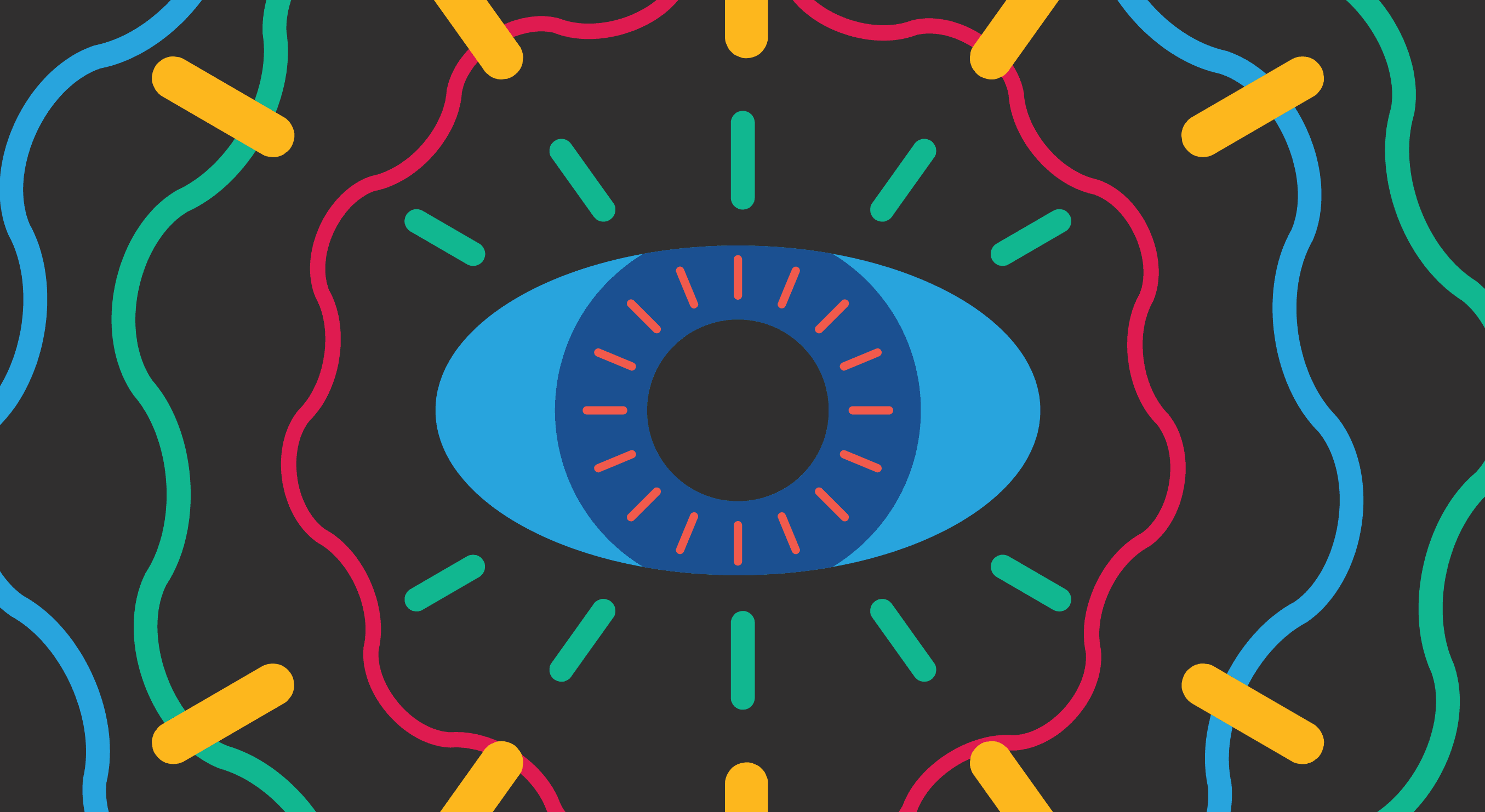 This is the first article in our five-part series about the visual system.

For so many of us, the visual world is a wonderful common denominator. A gorgeous reddish sunset always looks like a sunset; a dog looks like a dog, no matter shape or color; an orange is, well, an orange.

We take in that common information through our eyes, of course, but how do we actually process it? We’re going to explain a bit about how your eyes work—what goes on behind the scenes to create those sunsets, cuddly dogs, and juicy fruits.

The visual system has two parts. There’s the optical system (your eye) and the perceptual system (your brain). Your eyeball takes in the information; your brain in turn analyzes and makes sense of it.  A significant portion of the brain is devoted to understanding the visual world.

The five steps to how the ocular system (the eye) helps us see
Think about that orange. How do you actually see it? There are five key steps along an optical system pathway.

Step 1: Light travels through your cornea. Your cornea is a clear, dome-shaped protective layer at the front of your eye that can bend and refract light. It can get scratched easily or become dry, making vision less clear.

Step 2: The light then travels through your pupil. It is controlled by the iris, which is the colored part of your eye. Your pupil also controls the amount of light entering your eye. It dilates (becomes larger) in low light and constricts in bright light. Not surprisingly, your eyes are very sensitive to light.

Step 3: The light continues to travel through the lens, where it bends and refracts again. The lens focuses light rays for the retina, setting it up to receive the image.

Step 4: At last! The light lands on your retina, where nerve endings receive the image. The retina sends all that information from the image to your optic nerve so that you can see the orange.

Step 5: The optic nerve, lined with nerve fibers, transfers electrical signals from the retina to the brain. Next, the visual system in our brain takes over to give images their meaning, survey an environment, locate and recognize a target of interest, and then choose a plan of action.

A little more about the retina

Dr. Gordon S. Dutton, M.D., ophthalmologist and a leading CVI expert, often describes how the eye’s lens system works like a camera lens (we’re talking about an actual camera, not your iPhone!). An upside-down and front-to-back picture forms on the lining at the back of your eye, and the retina works like the film in a camera, deploying a system of rods and cones to capture an image, in close communication with your brain.

The retina processes two types of information. Central vision refers to color and granular detail, like seeing not only an orange but also its pitted skin. It’s processed in the macula, which is at the center of the retina. Within the macula is the fovea, where clarity of vision is the sharpest. The fovea has a high concentration of cone cells. Cone cells process bright light; red, green, or blue light; and detail.

Peripheral vision alerts you to where things are in space (like an orange whizzing near your head in a cafeteria, prompting you to duck). It’s processed by rod cells, which perceive low light and motion, and help us see at night.

Rods and cones are called “photoreceptor” cells. Both types of cells are arranged in a single layer in the deep retina. The retina has about 120 million rods and 6 million cones. The information received by the rods and cones is converted into electrical impulses. These electrical signals pass to an inner retinal layer of over 1 million cells in each eye (called ganglion cells), which transmit visual signals to the optic nerve and onto the visual pathway, where electrical signals from the retina are sent to the brain (see step 5, above).

Acuity refers to the clarity of your central vision. Ideally, it’s 20/20. (Try this test to see how visual acuity affects how things look.) Research shows that visual acuity is not fully adult-like until age 5 or above, but by six months, binocular fusion (use of both eyes for single vision) and depth perception is fully developed, with acuity nearing mature levels.

Contrast is the difference in the amount of light reflected off of two surfaces next to each other, and contrast sensitivity refers to the ability to perceive various levels of contrast (light orange, medium orange, and deep orange). Think of an orange on an orange plate as opposed to an orange on a black plate. When the orange is on the black plate, the difference between the orange and the background is very different in hue—that’s high contrast. On the other hand, It’s low contrast on the orange plate.

The visual field refers to how much kids can actually see, both centrally and peripherally.  It’s the area that is seen when eyes are in a fixed position. Most people have a 180-degree field. When we’re born, we have a visual field of about 30 degrees. By two months, eye movements are within 60 to 90 degrees. At four months, babies have a radius of 180 degrees. And by two years old, the visual field is similar to older kids and adults.

Once nerve impulses reach the brain, the optical system has done its job. Next, the perceptual visual system takes over to give images their meaning. The ventral stream function helps us process what we see based on visual memory. This is how we know that an orange is really an orange. The dorsal stream function situates us and puts that orange into context—say, sitting on a table or on a plate.

CVI occurs when your brain has trouble processing information sent from your eyes. However, often eye conditions co-occur with CVI, too, which affect visual processing.

Many kids with CVI also have ocular conditions, which can include:

Remember, many other ocular conditions can co-occur with CVI. It’s important to work with an optometrist or ophthalmologist to identify these impairments. Then, you can understand the impact of these conditions on visual access. A functional vision assessment (FVA) by a teacher of the visually impaired (TVI) is one assessment that looks at the implications of ocular impairment on functional vision. For children with ocular conditions and CVI, it’s important for the TVI to complete an FVA and CVI-specific assessments. Learn more about assessment.

Watch and learn from Tammy Reisman, TVI, M.Ed., C.A.E.S., about how she assessed and made literacy decisions for students with co-occurring ocular conditions and CVI.

Dutton, G.N. (n.d.). Cerebral Visual Impairment: Working Within and Around the Limitations of Vision. Publication for Royal Hospital for Sick Children, Glasgow, Scotland.