Henry's CVI was missed by doctors and educators until he was 5 years old. 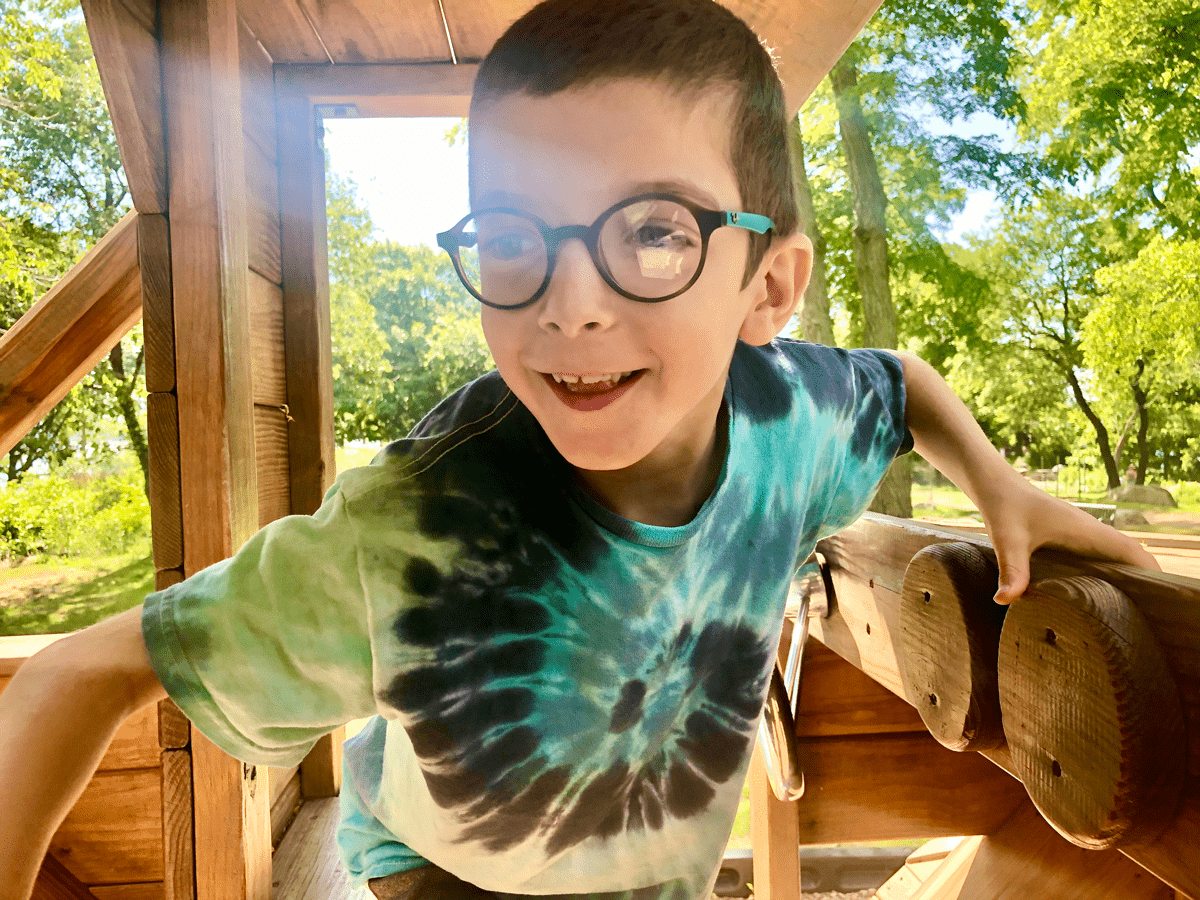 I still ask myself—what if?

What if Henry’s CVI was diagnosed early? What if we found an educational team in his early years that knew how to assess and teach him? What if he received interventions that were rooted in addressing the CVI characteristics (Roman) to help improve his functional vision? Where would Henry be on his developmental and educational journey if we only learned about his CVI earlier?

Since he was born, we puzzled over Henry’s vision problems, coupled with developmental delays, feeding issues and behavioral outbursts. By the time Henry was one year old, he was diagnosed with optic nerve atrophy, nystagmus, low acuity and exotropia. But it appeared that his unique visual behaviors were a mystery to his educational and medical providers. Why did he not look at me? Why did he not recognize me when I walked in the room? Why was he not interested in toys, books and videos? Why did he never look down when he walked, ate or played? Why did he hang on me and scream in new and busy environments? We had so many questions and very few answers.

Henry’s vision was always a mystery—at least that’s what every doctor told me. We saw pediatric ophthalmologists, neurologists, neuro-ophthalmologists, a pediatric genetic ophthalmologist at the National Institute for Health (NIH), and no one ever mentioned CVI. This included a series of teachers of the visually impaired (TVIs) that had worked with Henry since he was one. So of course, I took the wait-and-see approach. If these doctors and teachers aren’t sure, then Henry’s vision must be a mystery.

Our appointments were dominated by conversation about Henry’s ocular issues: his nystagmus and pale, small(ish) optic nerves. Henry also has hypotonia (low muscle tone), vestibular processing issues, and global developmental delays. We spent Henry’s first two years of life trying to get him to eat enough. He was in the zero percentile for weight for way too long. But now, he eats nonstop, and we are grateful to be out of survival mode. Like we all have heard, our kids are unique cases, complicated, with a lot of things going on. But this still doesn’t justify why CVI was not on our radar sooner. What if it was?

When Henry was in a Pre-K program for students with special education services, his teacher kept asking me about his vision. I kept going back to Henry’s primary ophthalmologist, who told me that his vision was fine and that Henry has serious attention and behavioral issues that need to be addressed (it took me a full year to go back to this doctor after we learned of his CVI). I naively told Henry’s teacher this and I am forever grateful that she did not listen to me. She got a specialist from the vision office to observe Henry who then recommended him for the Vision Pre-K class. At Henry’s IEP meeting in April of 2017, a TVI/Orientation & Mobility (O&M) specialist at the table said, “You know Henry has visual behaviors of CVI.” I sat there, mouth open, frozen with confusion, and muttered, “What is CVI?”

While this teacher correctly noted that Henry has CVI visual behaviors, she also incorrectly assessed that Henry did not need O&M services. As I learned more about the critical need for O&M services for children with CVI, I later challenged this assessment. Currently, Henry uses a white cane, mainly due to his lower visual field loss and difficulty with clutter, visual curiosity, motion processing, depth perception, and sensory integration. He often requires an adult with him to help navigate environments. Clearly, at this point, I knew I had to be the one to fight for Henry’s access. I had to be the one to gain a depth of knowledge of CVI.

In April 2018, Henry was finally able to get a medical diagnosis of CVI. He was five years old. I knew his vision was not typical, but I didn’t know how significantly visually impaired my child was until after FIVE years of being his mom. This will always be with me. What if I figured out Henry’s CVI on my own? What if I could have somehow filled in all the holes laid bare by our gauntlet of medical and therapeutic appointments?

For the past several years it’s been a whirlwind trying to learn as much as I can about CVI while processing the range of emotions that come with this new diagnosis—gratitude, anger, relief, frustration, excitement, WHY MY SON?! and hope. I became an avid student of CVI. I researched, read, attended training and took courses (thank you Perkins eLearning!) to learn as much as possible about CVI, the visual system, the brain, ocular impairments, assessments, adaptations and educational approaches. I connected with CVI families across the country and collaborated on several advocacy projects.

It has been one of my greatest joys connecting with CVI parents. Being able to revel in our shared experiences, ask questions, share resources and strategies, get fired up, and know that I have this brilliant and fierce community to lean on, gets me through the exhaustion and unsure moments.

As parents, we live with CVI 24/7. Henry lives in a world designed for someone else—designed for average visual processing abilities (Tietjen, 2019). His frustration, anxiety, and behavior show his need for access every day. He misses so much by not being able to fully access the visual world. We learn so much through incidental learning (what we observe from the time we wake up to the time we go to bed). For Henry, everything needs to be directly taught: How to use utensils, how to place a letter in the mailbox, how to navigate a new environment, how to draw and write, how to recognize something unfamiliar, how to smile on command, how to wave goodbye, how to take off his shirt, how to use the toilet, how to visually attend to a video, how to sort colors, how to identify how a texture feels, how to jump, and the list goes on and on. Incidental learning teaches foundational concepts that are the building blocks for learning and independence. So, yeah, raising a child with CVI is the challenge of my lifetime.

Currently, Henry uses his vision when he’s engaged in something deeply meaningful and motivating. But using vision is hard work. He uses so many compensatory skills to access his world: touch, sound, prediction, context, memory, and color-coding. He’s strong at engaging with and learning how to recognize 3D objects, but he’s still having a hard time processing 2D pictures and images. Visual fatigue happens every day. Henry relies heavily on color and tactile cues to recognize objects and targets. His tactile sensory system is really strong.

We recently moved to the Boston area so Henry could have access to better medical and educational services. It’s the best decision I have made in a long time. His new pediatric ophthalmologist at Boston Children’s Hospital knows CVI well. She registered Henry for the Massachusetts Commission for the Blind. Henry is legally blind. Our city posted a “Blind Child Area” sign on our street. I remember seeing the sign for the first time. I was elated. I felt affirmed and seen. All those years when Henry’s vision was a mystery to so many, were somehow righted with this sign. And I think back again, how did I not see all of this as his mom? How was his significant visual impairment missed? Why is the system failing our kids with CVI?

The move was so much change but totally affirmed because we found a school system that sees Henry for his strengths and abilities. This past year, he was fully included in the general education first-grade classroom with a great team of educators supporting him. His TVI is outstanding. For the first time in Henry’s life, his TVI completed a comprehensive assessment that included a functional vision evaluation for both his ocular impairments and CVI that included Roman’s CVI Range, Dutton’s Question Inventory, Tietjen’s “What’s the Complexity?” Framework and 2D Image Assessment and a Learning Media Assessment with a CVI lens. The assessment report was 18 pages long with 6 pages of recommendations. For the first time, I finally got a clear picture of the educational impact of Henry’s complex visual impairments, which include CVI, optic nerve atrophy, nystagmus, myopia, intermittent exotropia and visual acuity of 20/260.

I am working on processing the pain and grief that came with Henry’s missed CVI diagnosis and fighting for effective educational services. It is Henry’s full heart, unabashed happiness and the joy of watching him do what he loves to do, which help me find peace and acceptance. It is the inch-stones of progress that keep my hope alive.

In our CVI community, Henry’s diagnosis story is common. Children with CVI are under-diagnosed, misdiagnosed and many have difficulty getting access to appropriate educational services. This must change! Children with CVI have a right to an early diagnosis. They have a right to effective vision services. They have a right to an appropriate educational program. The medical and education fields need to fully wake up to CVI, so no parent is ever left wondering why their child’s vision is a mystery. So no parent is ever wondering, what if?

Rachel Bennett, M.Ed, is the Assistant Director of CVI Now and Parent Advocacy and Support. She is the parent to Henry, her 9-year-old son with CVI. Henry loves all household appliances—washer, dryer, instant pot, microwave, oven, dishwasher. He is a huge helper at home with all the chores! Henry loves to walk to the local bakery, go swimming, ride buses and trains (pre-pandemic), play at the splash park and playground, ride the cart at the grocery store, FaceTime with his friends and family, dance, and give big hugs. He’s a love.