A look back at the deafblind icon’s relationships with seven U.S. presidents. 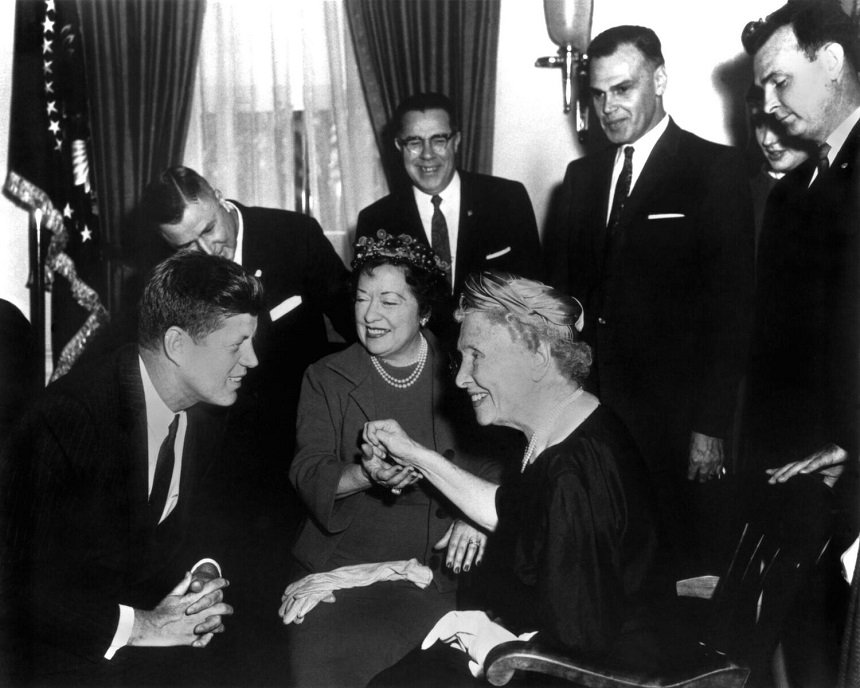 As a human rights icon, Helen Keller met nearly every U.S. president to hold office in her lifetime. But Keller, who lost her eyesight and hearing as a toddler, did more than just meet the nation’s leaders — she used her platform to enlist them in the fight for equal rights for people with disabilities.

In honor of President’s Day, we look back at some of Keller’s noteworthy relationships with the Commanders in Chief, the projects they worked on together and the inspiration they took from Perkins School for the Blind’s most famous student.

In 1913, President Taft and Keller served as keynote speakers at the opening of the Lighthouse, a social club and learning center for people who are blind in New York City. True to form, Keller used the moment to frame the big picture: “Establish a lighthouse in every city,” she said. “And hasten the day when there shall be no blind child untaught.”

In 1932, Keller, along with leaders from the American Foundation for the Blind (AFB), coordinated with the U.S. government to host an international conference for blind workers. More than 30 countries sent representative delegates who were greeted at the White House by both President Hoover and Keller herself.

Before Roosevelt was elected, Keller wrote him a letter saying “Something tells me you are going to be the next President.” Her faith in him paid off, as Keller successfully petitioned his presidency to adopt the creation of audio recordings for the blind as an official administration project. In 1934, President Roosevelt accepted her invitation to serve as honorary president of AFB.

During World War II, Keller made a habit of visiting wounded veterans who returned from war with disabilities. To thank her for her service, President Eisenhower invited her to the White House. There, Keller asked if she could “see” him and proceeded to run her hands across his face, a moment famously captured on camera.

Kennedy came of age in a world already changed by Keller. This wasn’t lost on him. In 1963, while wishing her a happy 83rd birthday, Kennedy wrote that Keller was one of very few “men and women whose achievements have become legendary in their own time,” adding she had earned “a permanent place in the history of human progress.”

In 1964, President Johnson awarded Keller the Medal of Freedom. In his remarks, Johnson called Keller “an example of courage to all mankind.” “She has devoted her life to illuminating the dark world of the blind and the handicapped,” he continued.

Though they never met, President Carter declared June 27, Keller’s birthday, as Helen Keller Day, in 1980. In his proclamation, he celebrated Keller’s life, writing, “She was able to develop and use her talents and demonstrate how much even the most severely handicapped individual can accomplish.”