Helen Keller is still regarded as one of the most powerful and well-known advocates for people who are blind and deafblind. 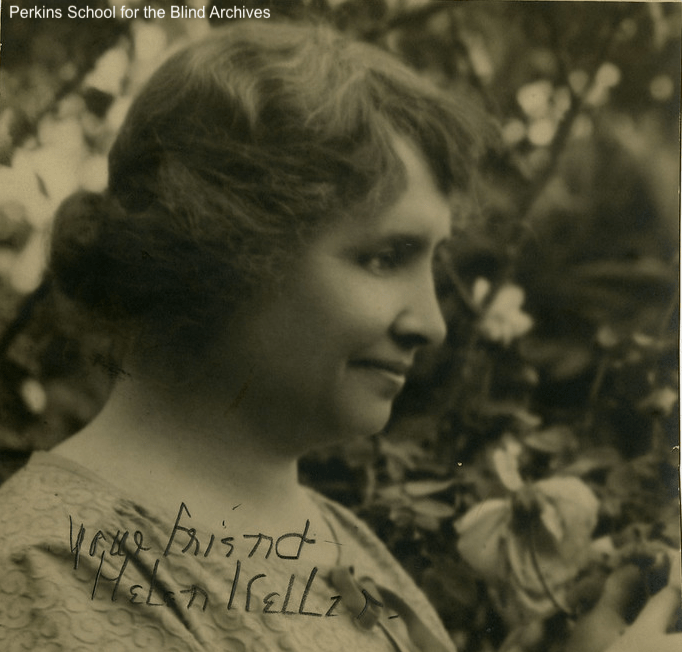 Who was Helen Keller?

Helen Keller is considered by many to be a leading figure of the twentieth century. When she was an infant, illness robbed her of her vision and hearing. Thanks to the pioneering strategies developed by Perkins’ first director, Samuel Gridley Howe, and the tenacity of Perkins alumna, Anne Sullivan, she became the world’s best known individual with deafblindness.

Today, she is still regarded as one of the most powerful and well-known advocates for people who are blind and deafblind. Her books and speeches have inspired millions including many well-known individuals such as Conrad Hilton, founder of Hilton Hotels, Ronald Reagan and Eleanor Roosevelt. Through her tireless efforts, she transformed the way the world viewed people with disabilities.

Where was Keller born?

A very healthy baby, Keller was born June 27, 1880 in Tuscumbia, Alabama, to retired Army Captain Arthur Keller and his second wife, Kate. Keller had a younger brother, Phillips Brooks, and a sister, Mildred. Her father was a cotton plantation owner and the editor of a popular news weekly, The North Alabamian. She lived a full life of 87 years, dying on June 1, 1968.

How did Keller become deafblind?

At the age of 19 months, Keller became very ill with a high fever, leaving her totally deaf and blind. Doctors at that time diagnosed it as “brain fever.” Experts today believe she suffered from scarlet fever or meningitis.

How did Keller communicate with others?

By age 7, Keller had developed nearly 60 hand gestures to communicate with her parents and ask for things. However, she was often frustrated by her inability to express herself. With the help of her teacher, Anne Sullivan, Keller learned the manual alphabet and could communicate by finger spelling.

Within a few months of working with Sullivan, Keller’s vocabulary had increased to hundreds of words and simple sentences. Sullivan also taught Keller how to read braille and raised type, and to print block letters. By age 9, Keller began to learn to speak and read lips, skills she continued to develop throughout her lifetime.

Who was Anne Sullivan?

Anne Sullivan was Keller’s teacher, companion and friend for nearly 50 years. Sullivan was born April 14, 1866 in Feeding Hills, Massachusetts, to poor Irish immigrants. At the age of 5, Sullivan contracted trachoma, a contagious conjunctivitis that attacks the eyes, and was left almost entirely blind. She later received several eye operations that restored some of her vision. After graduating class valedictorian from Perkins School for the Blind in 1886, she moved to Tuscumbia, Alabama, to become Keller’s teacher. Sullivan remained with Keller until her death on October 20, 1936.

Where did Keller attend school?

What subjects did Keller study?

Keller was an avid reader and follower of politics and world events. Among her favorite books were philosophy texts and volumes of poetry. She also enjoyed studying history and economics as well as foreign languages including French, Latin and German.

After completing school, what did Keller do?

Keller used her education and influence to help improve the lives of others. She published several books and essays about her own life and views and spent much of her time lecturing and lobbying for important social issues including women’s suffrage and assistance for people who were blind and deafblind. Keller also performed vaudeville and had a taste of Hollywood, making two movies about her life, “Deliverance” and “The Unconquered.” Much of Keller’s later years were spent traveling around the world, raising money and awareness for the blind and other social issues.

Did Keller ever marry?

No, although she was briefly engaged and had many admirers. Keller’s teacher and lifetime companion Sullivan did marry, however, and Keller lived with Sullivan and her husband, John Macy.

Did Keller meet anyone famous?

What kind of causes and charities did Keller advocate for?

Keller worked for a variety of causes during her life. She was an outspoken suffragist, an advocate of worker’s rights and an opponent of child labor, but she is best known for her commitment to improving the quality of life for people who are blind and deafblind. As a student at Perkins, she initiated and ran fundraising campaigns to establish a Perkins kindergarten for the blind and to pay for the education of Tommy Stringer, a poor boy with deafblindness whom she met.

As an adult, she lobbied for programs for the prevention of blindness, laws for the education and protection of the blind and deafblind, as well as state-assisted programs to help people with disabilities with job training and placement.

Did Keller receive any awards?

Keller received numerous awards throughout her life for her humanitarian efforts. In 1964, Lyndon B. Johnson awarded Keller the highest American honor, the Presidential Medal of Freedom. On the 50th anniversary of her graduation from Radcliffe College, she received the Alumnae Achievement Award. Radcliffe also dedicated the Helen Keller Garden in her honor and named a fountain in the garden for her teacher Anne Sullivan. Keller later received Brazil’s Order of the Southern Cross, the Philippines’ Golden Heart, Japan’s Sacred Treasure, and in 1991, was named one of the most important people of the twentieth century by Life magazine.

Who assisted Keller after Sullivan died?

After Sullivan passed away in 1936, Polly Thomson, who had worked in the Keller household since 1914, became Keller’s aide. Thomson passed away in 1960 and Winifred Corbally, a nurse-companion, assisted Keller until Keller’s death in 1968.

How can I learn more about Keller?

Keller published many articles, essays and books. Among them are two autobiographies, The Story of My Life and Midstream: My Later Life, and a biography of her life with Sullivan called Teacher: Anne Sullivan. She also published “Optimism: An Essay,” “The World I Live in,” “The Song of the Stone Wall,” “Out of the Dark,” “My Religion,” “Peace at Eventide,” “Helen Keller in Scotland,” “Helen Keller’s Journal,” “Let Us Have Faith” and “The Open Door.”

Among the many biographies are Helen and Teacher: The story of Helen Keller and Anne Sullivan Macy by Joseph P. Lash and Helen Keller: A Life by Dorothy Herrmann.

In addition, the movie “The Miracle Worker” was released in 1962 and was remade for television in 2000. “The Miracle Worker” chronicles many of the challenges and triumphs during Keller’s youth. Anne Bancroft won an Oscar for Best Actress for her portrayal of Sullivan. Patty Duke played the part of Keller and also won an Oscar for Best Supporting Actress. Both actresses also starred in the Broadway version.