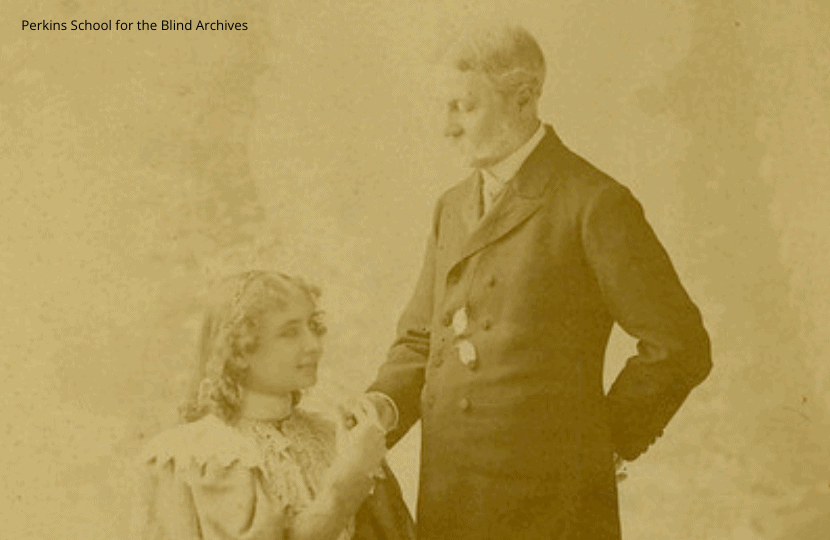 Rumors have been circulating on social media lately that Helen Keller couldn’t possibly have accomplished all that she did as a person who is deafblind. Unfortunately, this isn’t the first time Helen Keller has been accused of being a fraud and her achievements doubted.

After studying with Anne Sullivan and at Perkins and the Wright Humason School for the Deaf, Helen Keller continued her studies at the Cambridge School for Young Ladies, under the tutelage of Arthur Gilman.

At the Cambridge School, Sullivan attended classes with Keller and interpreted the lessons for her. Interpreters, then as now, relay communication to people who are deafblind through signing. When it came time for Keller to complete her college entrance exams, however, Sullivan was not permitted to be with her. Gilman had learned the manual alphabet so that he could translate the questions for Keller, who then used a typewriter to type her responses. (Herrmann, 115). After her success at the Cambridge School, she decided to attend college, which required standard entrance exams, from which she would not be exempted.

Aware of the skepticism and gossip about Keller’s ability to complete the examinations, Gilman kept extensive notes on the methods and process of their administration. For an Advanced German exam, he wrote that: “This paper was produced in the following manner. The paper set for Advanced German was read through by me, each word being spelled with my hand, by means of the ordinary ‘manual alphabet’ of the deaf. The candate[sic] then began her work, each sentence being re-read to her in the same way. She was instructed to use dashes for words that were new to her. When the writing was completed, the work was re-read to her in connection with the paper, and she dictate [sic] such changes as occurred to her. The lack of eyes is all that was supplied by me.”

While at Radcliffe, Sullivan interpreted the lessons and lectures for Keller. Her examinations at Radcliffe were “administered by two proctors” and were “nightmarish events.” Sullivan was not permitted to serve as one of the proctors for fear that she would provide the answers to Keller (Herrmann, 126). The proctors were to prove that Keller was not a fraud, but there was still gossip both on and off campus about whether it was Keller or Sullivan who completed the school work. One of Keller’s proctors, who was a former Perkins Institution teacher, recalled that the Dean put certain rules in place for Keller’s examinations: “Miss Sullivan was to leave the building when the examinations started. …She, the Dean, would pay personally for two proctors, one to proctor Helen, and another to proctor Helen’s proctor.” The former Perkins teacher had a braille typewriter to translate questions for Helen. (Herrmann, 126-227)

As part of the Dean’s efforts to prove that Keller was the student at Radcliffe who completed the form, “All records for the four years were kept on file” and “a surprising number asked to examine them” (Herrmann, 127). Even before her time at Radcliffe, though, people refused to believe Keller’s success and “some came to Perkins to actually test Keller” (Wagner, 78). After Radcliffe, and throughout her life, some people saw Keller’s “odd way of speaking and making metaphors” was proof that either Keller was a “charade” or that Sullivan was a “puppet master” (Wagner, 80).

Despite countless questions and doubts about her abilities, Keller continued her work as an advocate, writer, and activist.

Explore some of Helen Keller’s schoolwork and examinations: