Exploring music for students who Are blind

Music can not only help students develop general skills but can also get them to accept and express themselves as they are. 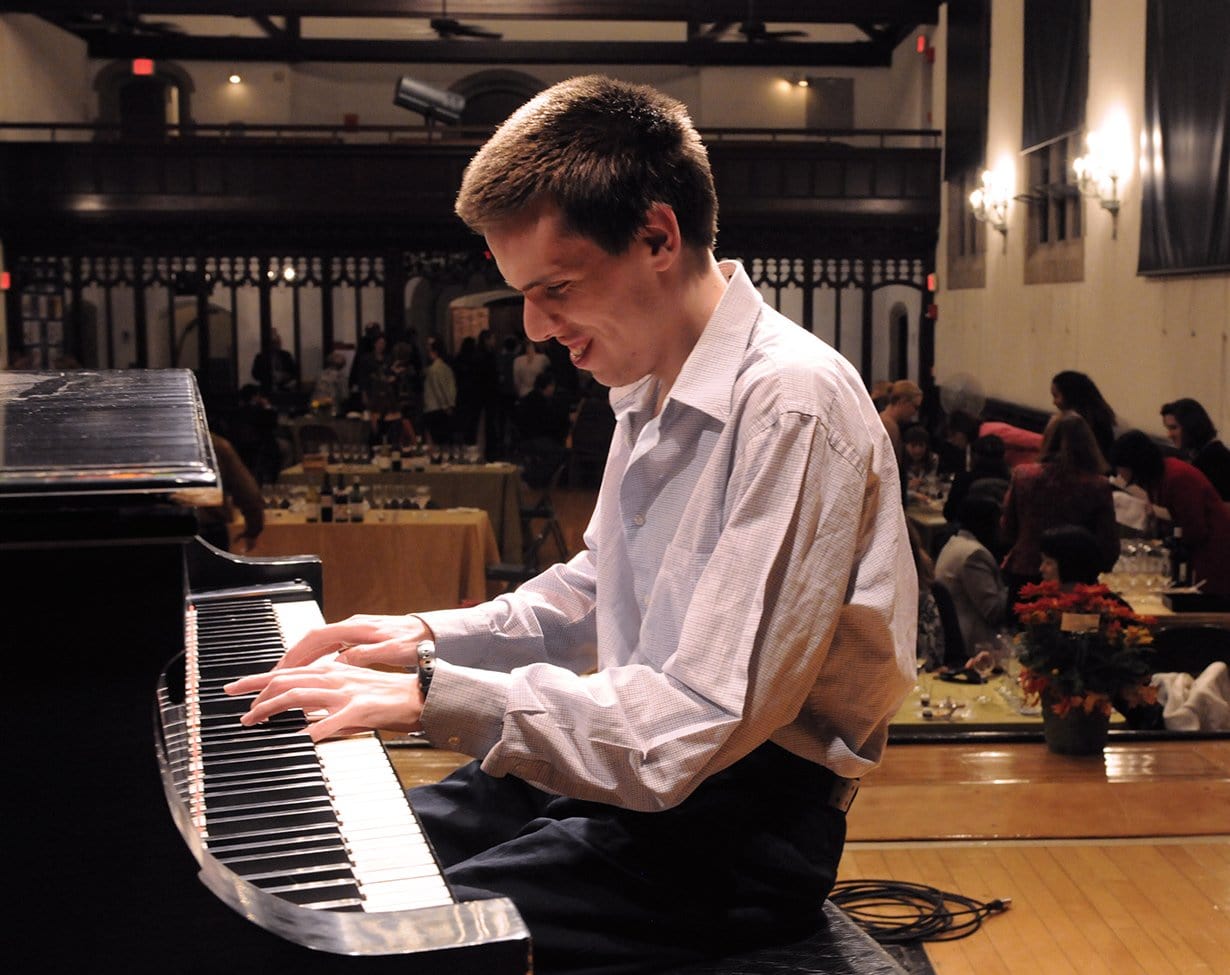 In Perkins Early Learning Center four-year-old Eric rocks back and forth in a rhythm as music therapist Jill Buchanan strums her guitar and sings. She hands him a plastic giraffe-shaped shaker and makes up a song to the tune of “I’m a Little Teapot.”

“I have a little shaker here at school,” Buchanan sings. “I’ll shake it up high and I’ll shake it down low.” Eric rattles the shaker over his head and brings it back to his lap. “Then I’ll stop,” the guitar is silenced and Buchanan reaches for Eric’s hand giving him the cue to stop shaking and appreciate a few seconds of quiet.

“I want to get the whole child involved,” Buchanan says later, explaining how music therapy can be a precursor to developing language or orientation and mobility skills.

Several years ago a nonverbal toddler with visual impairments came into Perkins Early Learning Center screaming. He would become distressed by noises in the building or act out when his routine was interrupted.

“It felt like he didn’t want to communicate with us,” music therapist Jill Buchanan remembers. “But then we discovered his love of the piano.”

At first the student would listen and get quieter when Buchanan played. With repeated encouragement, he began pressing the keys and made the connection between his actions and the music he was hearing. The music had a soothing effect, helping him to refocus and giving him an outlet for expression. Before long he was heard humming the tune to “Happy Birthday” in the hall the day after classmates sang to a fellow student.

“He was communicating through music … Music was the way in,” says Buchanan. Currently attending Perkins Lower School, this student continues to make progress in music therapy and now takes instrument lessons as well.

The story is not uncommon in Buchanan’s 12 years at Perkins. Oftentimes, she says, students with visual impairments who may have other disabilities come into the program with preconceptions about what they “can’t” do. Music therapy, she says, instills self esteem.

“They leave a music therapy session feeling like they can,” Buchanan says, adding that with self esteem comes openness to taking risks. “Students who are typically a little shaky on their feet might feel like standing at the instrument. The impulse to use their whole body to participate in the music becomes stronger than the impulse to withdraw.”

On the other side of campus Jill’s husband, John Buchanan, is sitting at the piano as four Secondary Program students (ages 14-22) file into his classroom for a Music and Movement session accompanied by adapted physical education teacher Peggy Balmaseda. The innovative class fuses music therapy with fundamental movements and motor skills required for orientation and mobility.

To get everyone moving Buchanan plays a soft, warm melody on the piano and Balmaseda goes around the room encouraging each student to move his spine and twist to the side. As the students become more animated, the music gets more upbeat.

“With the music I can provide a pulse,” said Buchanan, describing a dialogue in which he responds to the students’ movements with music. “They become the conductors with their bodies.”

During individual solos, Kyle unlocks his wheelchair and pushes himself forward into the circle. He makes his way to the piano and Buchanan hands him a drumstick. He lightly taps out a beat.

A classmate, Deni, stands in the middle of the room holding the handles of an exercise stretch band. He sways back and forth wearing a serene, peaceful smile and uses his voice to create a soulful melody. A music therapy intern playing the conga drum echoes Deni’s sounds and their voices meld into a bluesy rhythmic chanting. As the tempo speeds up, Balmaseda pulls on the middle of the band behind Deni’s back and works it vigorously.  His smile grows as his arms swing up and down and side to side. He picks up his foot and stomps it back down to the drumbeat. The music winds down and Deni’s turn is over. An approving Balmaseda exclaims, “You really came alive, huh!”

For Buchanan, unlocking that kind of free self expression is what it’s all about. “It’s about giving them an opportunity to really be heard from the inside … It’s been phenomenal to see some of these students who were very frozen inside blossom.”

Music therapists Lisa Martino and Michael Bertolami in Perkins Lower School encourage students to express their musical impulses whether that involves vocalizing, singing harmonically, or picking up on a rhythm.

“Music is an equalizer,” explained Martino, adding that everyone can participate in the process. “Each child brings a unique musical quality.”

Martino and Bertolami regularly attend individual education plan (IEP) meetings where members of the educational team come together to discuss an individual student’s educational goals. When a goal is having a student make choices and communicate his needs, the student can be given options during music therapy such as choosing an instrument to play or asking for a particular song.

Speech therapists commonly join sessions and work alongside the music therapist on communication goals using pictures or tangible symbols to help students understand concepts. Nonverbal students might use switches with recorded messages to greet peers or participate in a song.

While performing is not the goal of music therapy, many Lower School students participated in a spring concert with a theme tied to the construction of a new Lower School building. During the performance students posed questions to the construction project manager. In addition to building self esteem through performance, the concert became a way to help students understand and feel part of a significant upcoming change.

Music education and performance has long been an integral part of life at Perkins. Music Director Arnie Harris leads student choruses and instrumental groups including a string quartet. Harris, who also teaches music in Newton Public Schools, said his approach at Perkins and in public schools is very similar.

“Music is for everybody,” says Harris. “You have fun, you learn something, and you get to participate and express yourself.”

For students who are visually impaired, Harris has developed simple adaptations such as using Velcro strips to help students find the correct finger positioning on an instrument.

Collaboration is a key element of music performance and teaches students to listen to each other and work towards a shared goal. Every year students perform public concerts in Dwight Hall on Perkins campus. At this year’s Spring Concert three student chorus groups delighted the crowd with songs including traditional spirituals; “I Feel Pretty” from West Side Story; “It Don’t Mean a Thing If It Ain’t Got That Swing”; and “Music is Our Vision” (a song with lyrics written by students set to original music by Harris).

Adele Trytko, who has over 50 years of musical accomplishments at Perkins and beyond, directed the student Handbell Ensemble in performing what she described as a universally challenging piece in the handbell world: “The William Tell Overture” (commonly known as the Lone Ranger theme song).

Handbells of varying shapes and sizes had been strategically positioned on a long table. Each member of the ensemble had been practicing their individual parts since January with only a couple of group rehearsals. Unable to rely on a printed page, the students must learn to recognize the pitch and sound of each individual note by ear. In practice sessions, Trytko meets with a few students at a time and plays notes on the piano as they ring the bells.

At the concert where flashes of movement were mesmerizing. Resonating sounds emanated from shaking bells and quick flicks of the wrist produced solitary notes. The hard work paid off and Trytko beams with pride.

“Everyone’s doing something different and it all comes together,” says Trytko, who has written articles explaining how techniques used to teach handbells aids the development of general skills including listening and paying attention; motor development; and social interaction.

“There’s a thought process between the brain and the physical motion,” Trytko explains, adding that handbell ringing requires a lot of motion in a relatively small space which can help students who are visually impaired develop a sense of spatial relations.

John Buchanan believes music can not only help students develop general skills but can also get them to accept and express themselves as they are. In his music therapy sessions in Perkins Deafblind Program, Buchanan works with students who have varying degrees of hearing and vision loss. As he circles the room with a guitar or drum students who may not hear the music will feel the vibrations of a rhythm and reach out.

Buchanan believes music transcends sound and breaks through language barriers that can result in isolation for individuals who are deafblind. During music sessions student behaviors that might be distracting in other settings – such as a student pounding a fist on his knee – become part of the music and an accepted form of self expression. Buchanan might place a drum between the student’s hand and leg and their natural impulses become part of the song.

When left to express themselves freely through the music and be who they are, Buchanan said, “the students’ impulses can be guided into a musical dialogue, transforming them into a positive, communicative exchange.”

“I think their world is very rich inside and it’s full of things we can’t even fathom,” says Buchanan. “I feel very humbled by it.”