Samuel Gridley Howe, first director of Perkins, wondered what would be revealed if he were able to reach the isolated mind of a deafblind child. 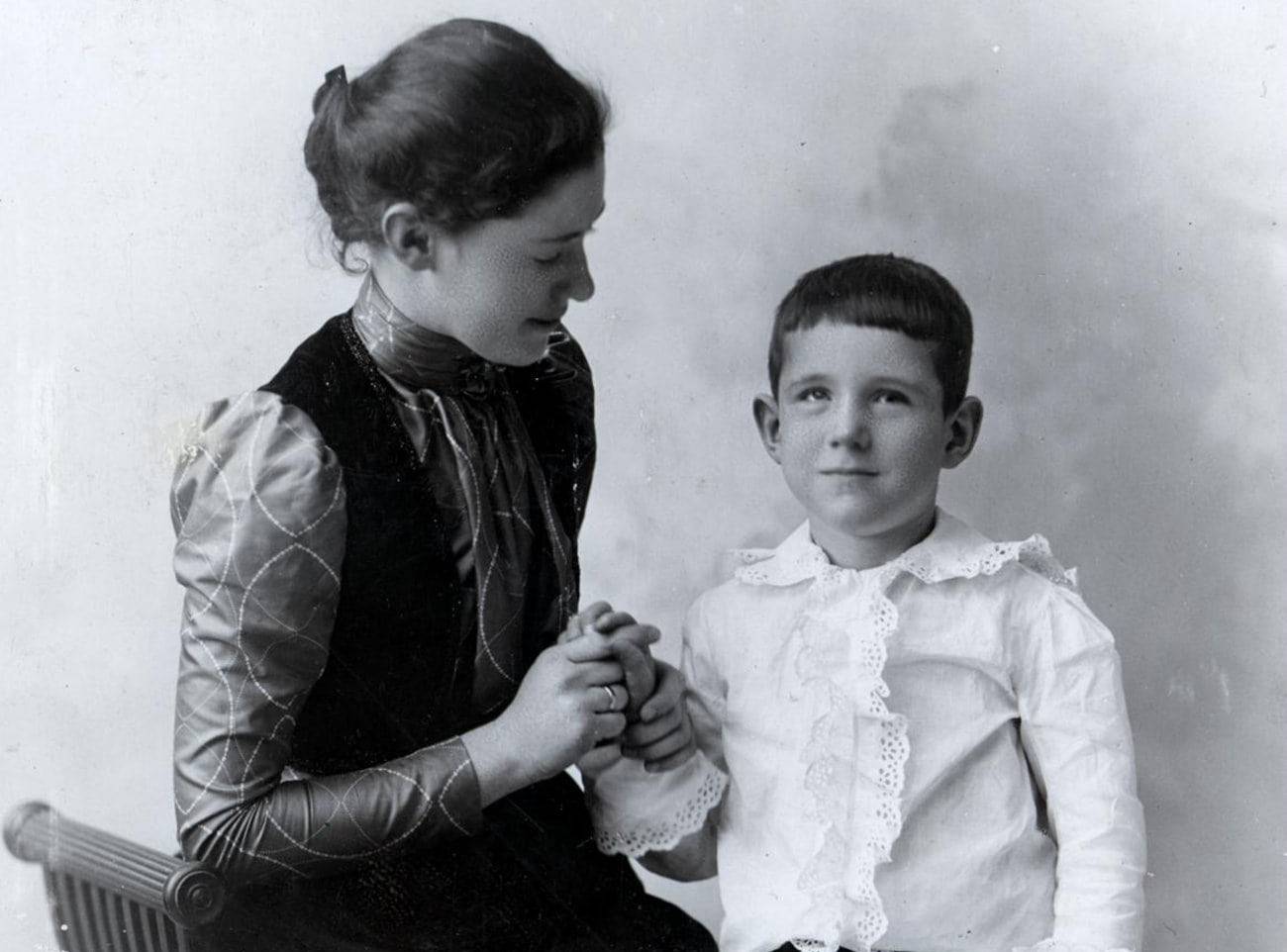 Before any child who was deaf and blind had been educated, philosophers had long speculated that the mind of a child who was deafblind could reveal what is basic and true about human beings. They believed that such a child deprived of sensory input and ignorant of the world would offer them insight into innate human knowledge of a higher being.

Samuel Gridley Howe, the first director of Perkins School for the Blind, similarly wondered what would be revealed if he were able to reach the isolated mind of a deafblind child. In 1837, five years after opening what was then known as the New England Asylum for the Blind, he learned of a young New Hampshire girl who had lost both vision and hearing as a result of illness. He loved a challenge, and immediately journeyed to New Hampshire to meet seven-year-old Laura Bridgman.

Howe convinced Bridgman’s parents that her best chance lay in being educated at Perkins. He started her education by introducing her to language, using raised letter labels on common objects such as keys and spoons. Within weeks Bridgman made the breakthrough realization that objects have names. She was assigned a full-time teacher and eagerly learned the fingerspelling method used by people who were deaf. After a year of concentrating on language, grammar and general knowledge of the world, Bridgman enrolled in the regular Perkins curriculum, which was strictly regimented. In addition to a traditional program of education, the schedule included vigorous physical exercise and handwork such as knitting, crocheting and sewing. Bridgman’s education created the model followed by all Perkins students who were deafblind for decades.

After completing her formal education at the age of 20, Bridgman left school. She moved to New Hampshire to live with her family but soon became lonely and despondent. She eventually returned to the social and intellectual stimulation of Perkins, where she taught needlework and sewing, remaining there until her death in 1889.

Samuel Gridley Howe’s successful work with Bridgman was well documented and widely reported in annual reports to the legislature and in the popular press. Although she became virtually unknown later in the 20th century, in her childhood, Bridgman was said to be second in fame only to Queen Victoria.

In 1886, Michael Anagnos, Howe’s son-in-law and the second director of Perkins, received a poignant letter from a Captain Arthur and Mrs. Kate Keller. The Alabama couple sought help for their young daughter, Helen, who, like Laura Bridgman, had become deafblind as a result of illness. Because the child was too young to attend Perkins, Anagnos sent them a teacher, recent graduate and valedictorian Anne Sullivan. When Sullivan was a Perkins student she had befriended the middle-aged Bridgman and had mastered the manual alphabet so the two could converse.

Before setting out for Alabama, Sullivan spent months preparing for her task by reading Howe’s reports on the education of Bridgman. When Sullivan met Helen Keller, she quickly realized that educating the exuberant six-year-old child called for a more creative approach. Sullivan recognized that Keller’s intelligence and lively curiosity presented many teachable moments. She observed what interested the child and used that interest as the entry point for a lesson. Maria Montessori later credited Sullivan with using the “Montessori” method years before Montessori had developed it herself.

Helen Keller arrived at Perkins 50 years after Laura Bridgman. In the years between, and for decades afterward, many other children who were deafblind were educated at Perkins. Although Anne Sullivan’s creative, child-guided educational techniques were groundbreaking, the approach to educating Perkins students who were deafblind varied little from Bridgman’s day. Each child had his or her own special teacher, usually a young unmarried woman who was on duty constantly from morning to night, sometimes around the clock. The children attended classes with the other Perkins students, and their special teachers fingerspelled the lessons and provided supplementary information.

Keller enjoyed communicating with the world at large, and she worked hard to learn to speak orally. Keller’s efforts influenced educators of the deafblind, and in the 1930s they began focusing on oral speech. Sophia K. Alcorn of Kentucky developed a method to teach oral speech to people who were deafblind, and Inis Hall introduced it at Perkins.

In the Tadoma method (named for students Tad Chapman and Oma Simpson), one placed a hand on the face of the speaker, thumbs lightly touching the lips and fingers spread on the cheek and upper neck. The listener could identify speech by feeling air, lip and jaw movement and the vibration of the speaker’s vocal cords as each sound was made. Tadoma was the primary method of teaching speech and language to children who were deafblind until the early 1950s. Mastering Tadoma was very time consuming, and Perkins established a separate Deafblind Program to focus on the needs of those students.

In the late 1940s there was a critical shortage of teachers of deafblind education. In 1949, Maurine Gittzus (of Perkins) established the Michigan Program to train educators of students who were deafblind, but it did little to meet the need. In 1953, Perkins, with the American Foundation for the Blind, co-sponsored the first conference on education of the deafblind, where educators discussed how to address the teacher shortage. Afterward, Director Edward Waterhouse asked the Perkins Board to make a fateful decision: either close down the Perkins Deafblind Program altogether, or commit the resources to create a teacher-training program. The trustees rose to the challenge.

Daniel J. Burns joined the staff as head of the new department, and in the fall of 1956, Perkins teamed with Boston University to offer a Masters degree in Deafblind Education. Rose Vivian and Helmer Myklebust developed new evaluation protocols. Teachers began supplementing the Tadoma method with the manual alphabet and sign language, a communication system much better suited to many children who were deafblind. Enrollment in the Deafblind Program grew.

Fluctuations in the deafblind population

The Rubella epidemic of 1964-65 resulted in the birth of more than 3,000 children in the United States who were deafblind. Perkins was well-prepared to lead in the effort to establish services for these children.

The development of a Rubella vaccine in the 1980s resulted for a time in a decrease in enrollment in the Deafblind Program. However, the incidence of congenital deafblindness and multiple disabilities began to increase once again in the 1990s. Due to current medical technology, doctors are able to save newborns with very low birth weights including children with unique and rare syndromes. Many of these children survive with complex medical conditions, presenting educators with equally complex educational challenges.

Teachers adhere to a total communication philosophy and use a wide variety of communication methods (e.g., sign language, gestures, pictures, objects, Tadoma, speech) selected to meet the specific requirements and abilities of each child. Individualized education plans challenge each student to reach and grow. The Perkins Deafblind Program has adjusted its methods while maintaining some of its original strategies to serve the educational, physical, psychological, cognitive and health needs of these children. From the days of Laura Bridgman to the 21st century, Perkins continues to provide the highest quality education to students who are deafblind.