Back to Resources
Activity

Out of this world coding concept activities geared for low vision students! 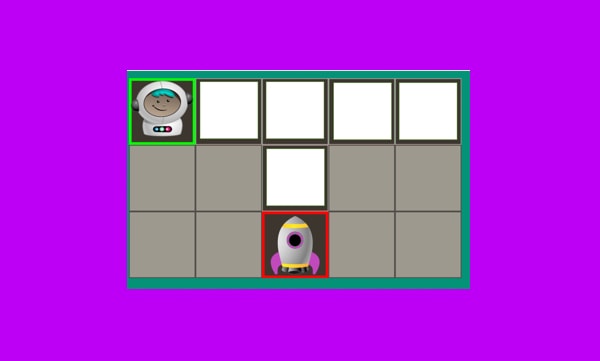 Your mission is to travel through space helping Astronaut Tommy as he searches for aliens! The CodeQuest app is an accessible maze-type coding logic app. APH offers this free iOS app along with the following downloadable tactile graphics: tactile graphic embosser, embosser with .brf file, and 3D printer files for the CodeQuest characters and the arrow game pieces.

Editor’s Note: As of 12/2/22, the APH tactile graphics files are missing from APH’s CodeQuest page. You can find the the 3D printer files and laser cutter board files on the Paths to Technology post, Teaching the CodeQuest App to students who are visually impaired.

What about students with low vision who need manipulative resources to support learning coding logic concepts? TSVI extraordinaire, Jessica McDowell, has created large print paper files of the CodeQuest mazes along with the arrow game pieces! Jessica shared that she created the large print paper version for a visual hands-on learner to help with his orientation to the screen. This large print version enables him to inspect the elements closely in isolation and to use the manipulatives.

For hands-on learning, the student can place the corresponding large print paper arrows on the paper maze.

Teaching Hint: Be sure to use spatial terminology: right, left, down and up. Also incorporate grid concepts such as rows and columns.

Note: The first four images below are CodeQuest’s Planet Kratos Level 3, a 3 row x 5 column grid. The black grid squares are “open spaces” and the grey grid squares are “unbreakable walls”. The black squares form a “T” shape: All of row; row 2, column 3 and row 3 column 3.

Place corresponding arrow cards in sequenced in a row below the paper game board. This closely resembles the digital version with a sequenced row of arrow cards.

[Image 3: iPad displaying CodeQuest maze and a row of corresponding arrow cards (without the large print game board]

Using the 3D printed characters, have the student physically move the astronaut character through the maze to his space ship. With the game levels that include an alien, the 3D alien can also be placed on the game board. Students will have a ‘blast’ using the 3D characters!

Note: If you do not have the related 3D characters, substitute any little character/animal object!

[Image 5: CodeQuest paper arrows laid out spatially (not in a row) with The 3D astronaut on the first arrow and the 3D alien at the end of the route.]