Two years after Charles Frederick Fraser (1850-1925) graduated from Perkins, he became the first Superintendent of the Halifax School for the Blind in 1873. 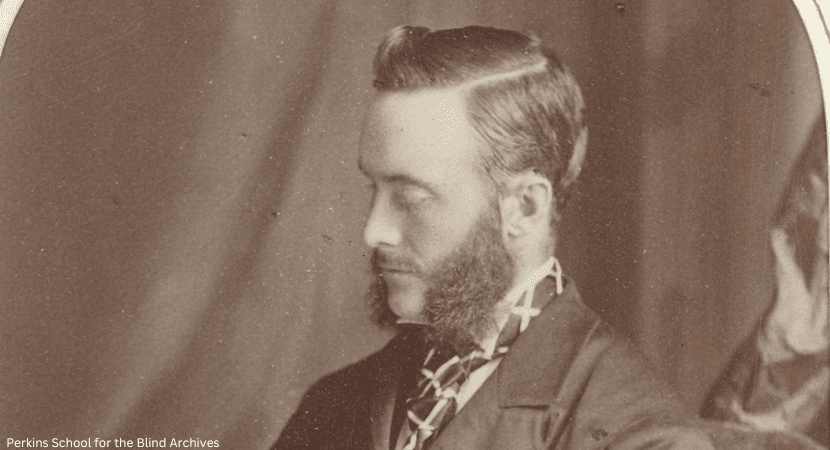 On January 4, 1850, Charles Frederick Fraser, nicknamed “Freddy,” was born to Dr. Benjamin Fraser and Elizabeth Allison in Windsor, Nova Scotia. After losing his sight as a child, Fraser attended Perkins from 1866 to 1871. Following his graduation, Fraser went on to a business career before becoming the first Superintendent of the Halifax School for the Blind 1873. Considered a hero for his advocacy on behalf of  the blind, Fraser “wanted to help [people who were blind] all to be free by training them to earn their own livelihood” (McNeil, 14).

One of 15 children, Fraser went to school with his brothers and sisters when he was four years old (McNeil, 6). When he was seven years old, Fraser injured one of his eyes while he was whittling a stick after a piece of his penknife, or the blade itself, grazed his eye. After “simple remedies were used” with poor results, Fraser’s father took him to Boston to consult with Dr. Williams, who “considered Fraser too young for surgery” (McNeil, 8). Fraser’s father, a doctor himself, believed that removing his son’s injured eye would save sight in the other, uninjured eye. The pair returned home, however, with nothing done and Fraser returned to school in Nova Scotia. At school and at home, Fraser was spared much punishment “he richly deserved” because his father was afraid that crying would cause further injury (McNeil, 9). If he did not complete his schoolwork, he would bring plums to his teacher, Dr. Curran which, he related later, “always worked well” (McNeil, 9.)

During this time, Di (Diogenes), Fraser’s faithful canine companion, “kept close by his master’s side and enabled him to play games” including baseball as Fraser followed the dog to retrieve the ball (McNeil, 9).

When Fraser was 13 years old, his father took him back to Dr. Williams who operated on him to place an artificial pupil in his injured eye. After the operation, however, Fraser continued to lose vision in his uninjured eye as it became “radically worse” (McNeil, 10). Fraser’s father arranged for his son to attend Perkins School for the Blind, which was known as Perkins Institute for the Blind at the time..

Charles Frederick Fraser entered Perkins “under the tuition of Doctor Samuel Gridley Howe, and Sir Francis Campbell” in 1866. When he started at Perkins, Fraser had enough vision to travel around the city, but eventually “it failed him.” At Perkins, he was “imbibed in self-reliance, tenacity of purpose to overcome his disability, and not permit it to handicap his life work” (McNeil, 10). Fraser was a “great favorite” and described as “fearless, courageous, honest, and kind.” He was an athlete with “great zest” and “a vigorous constitution” and excelled at mathematics and “was a wizard at arithmetic” (McNeil, 10, 13) . He often entertained his fellow students with “graphic accounts of the pyramids of Egypt” and other subjects (McNeil, 12).

Fraser did not, however, abandon his mischievous behavior once he arrived at Perkins. He would “break the rules when he thought they did injustice to his own inherent rights” (McNeil, 12). Although smoking was strictly forbidden, Fraser was known to sneak down to the boiler-room to smoke his pipe (McNeil, 12). Fraser also created a club with fellow students and was asked to leave in the middle of the term. He returned the next year and graduated from Perkins at the age of 22.

After graduation, Fraser was offered the position of Principal of the school for the blind in Halifax, but did not accept as the school was struggling. Fraser Two years later in 1873, however, he accepted the position, but “[refused] any salary until such time as they would be financially able to give him a living wage” (McNeil, 13).

Halifax School for the Blind

When Fraser arrived, the Halifax Asylum, as it was known, consisted of a wooden building, two teachers, and six students (McNeil, 13). Fraser changed the name to the Halifax School for the Blind, arguing that “asylum” implied it was “an established designed for aged and decrepit persons” (McNeil, 16). There was no free education available to students who were blind at the time, but Fraser “hammered at the doors of the Legislature” until he received a grant of $1,200 a year to operate the School (McNeil, 14).

The School offered services to students between ages 6 and 21, teaching them reading, math, history, and geography. Emphasizing his desire for independence, the School taught trades like piano-forte tuning, music teaching, cane-chair seating, and massage (Pearce, 5). To grow support for the School, Fraser traveled to all 14 counties in Nova Scotia, bringing several teachers and the student orchestra with him to give concerts and lectures. For forty-five consecutive nights, Fraser “addressed audiences on the claim of the blind,” resulting in an Act of Parliament giving Free Education for the Blind of Nova Scotia in 1882 (McNeil, 14).

By 1903, 71 boys and 47 girls were enrolled in the School, which was offering Kindergarten, Grammar School, and High School programs. Fraser served not only as the Superintendent, but also as a teacher. He instructed students in english, mathematics, history, geography, music, and chair-caning and edited the School magazine, “The Critic.” (McNeil, 18). Graduates of the School went on to further training, employment, or college studies (McNeil, 26).

The School became a public institution in 1975 with the formation of the Atlantic Provinces Special Education Authority, before closing in 1983 (Nova Scotia Archives).

Fraser believed that nothing was too good for the school and “there were no limits to the superintendent’s enterprise in securing the best” for his teachers and students (McNeil, 21). He was not afraid to ask for things that would benefit the School. When new playground equipment was needed, Fraser went to the Local Council of Women. The effort was so successful that with funds raised from a fair, donations, and other “entertainments,” a new playground structure was purchased and a playroom was furnished for younger students (McNeil, 21).

A day in the life

Mary A. E. A. McNeil described Fraser’s daily schedule during his later years in her biography of Fraser, The Blind Knight of Nova Scotia. At 7:15, Fraser would rise and attend the school gathering for prayers and roll-call at 8:00. Breakfast was served at 8:15 and “after the morning paper was read to him, he made it a practice to begin the day in his office” by 9:00 “punctually.” At 1:00, Fraser would have lunch and “after a short nap returned to the office again” until he went for a walk from 5:15 to 6:00. His walk was in the “open air, through the park,” but in bad weather, “he would walk the long corridors of the building.” Finally at 6:00, the evening meal was served, “after which the evening paper was read.” Other reading would follow, or visiting with friends. (McNeil, 18-19).

In 1891, Charles Frederick Fraser married Ella Jane Hunter, who wrote several books for children. She died in 1909. Fraser remarried in 1910 to Jane Catherine Roxby Stevens, who “took a keen interest in the work of the blind.” Together, they had a son, Charles Frederick, Jr., born in 1911 (Guilford ; McNeil, 20).

Other services at the School

In addition to the School, Fraser established a free library for the blind which not only served “pupils in the classroom,” but also the “ever increasing number of graduates” (McNeil, 15). Fraser “urged that raised print books should be transmitted free through the mails” in 1891. After much lobbying by Fraser, the Canadian Post Office adopted a policy that embossed books be transmitted free of postage in 1898 (McNeil, 15). The circulating library with embossed books contained 1,121 volumes, made possible by donations.

Following the Halifax Explosion of 1917, the School essentially became a medical center, treating injured Haligonians. Temporary wards opened in the school building, housing fifty patients. The Annual described that the “buildings withstood the terrible shock without great structural damage, saving to window glass, plastered ceilings, and walls, doors, window…, and much of the internal woodwork.” It took two years for repairs to be made to the building because of the damage done, but also the financial implications of the Explosion. As the students returned home, the School did not receive funding for their education. Fraser worked with Perkins director, Edward E. Allen, and other superintendents of schools for the blind in the United States on the American Red Cross Committee on Eye Victims of the Halifax Disaster. Together, the members proposed a budget for the ongoing support for the victims of the Explosion who lost their sight. Supporting Fraser’s belief in preparing people to live independently, the budget included funding for schooling, home teaching, sight saving classes, prevention of blindness, and other categories over a number of years.

Fraser was a household name and received many accolades both during and following his time as Superintendent of the School. In 1913, Fraser was publicly thanked by the Legislative Council of Nova Scotia, an honor that had “not been accorded to anyone for over eighty years” (McNeil, 27). Fraser’s “life-long friend,” Sir Richard Borden recommended Fraser to the King of England for the honor of Knighthood in June 1915. In 2016, he was inducted in to the American Printing House Hall of Fame.

After 50 years of service, Fraser retired in 1923. During his tenure at the School, 777 students had entered and many had “become self-supporting men and women” (McNeil, 28). Following his retirement, he was “ordered south by his physician” and the “balmy air of Palm Beach seemed to rejuvenate him” (McNeil, 30), while he spent his summers in Halifax. After a rough boat trip to Bermuda in 1924, Fraser was unable to regain his strength and died on July 15, 1925.

Pearce, Joanna L. ‘Fighting in the Dark’: Charles Frederick Fraser and the Halifax Asylum for the Blind, 1850-1915. Dalhousie University, 2011, bit.ly/halifax-pearce.

“The Nobel and the Successful Work For His Fellows That Has Been Done by Charles Frederick Fraser–” The Halifax Herald, July 15, 1899. Available on the Internet Archive.