Twelve students are graduating from Perkins' Secondary and Deafblind Programs.

Congratulations to the 2019 graduates of Perkins School for the Blind. On Friday morning, twelve incredible students marked the end of one chapter in their lives and start another.

During their time as students, they’ve become talented musicians, radio DJs and experts in different assistive technologies. They’ve excelled in athletics and academics, making friends with one another along the way. Most importantly, they’ve developed the self-advocacy skills necessary to go after what they want in life.

We couldn’t be more proud. 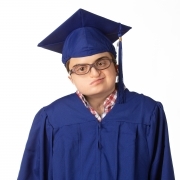 Held in Dwight Hall on Friday morning, Perkins’ 139th graduation ceremony was a celebratory occasion, one filled with cheers, music and acknowledgement of all the hard work put forth by students over the years. A student in a cap and gown, holding a white cane, walks down the aisle at graduation while people cheer him on.

Ahmed Alenezi, a student in the Deafblind Program, delivered welcoming remarks in sign language, aided by an interpreter. Ahmed came to Perkins from Kuwait in 2015, frustrated with the services and support he’d previously received back home. “Growing up, I felt angry. My teachers ignored me,” he said. That changed, however, when he came to Perkins. “I came to Perkins and things were totally different. I’ve worked hard and now I want to live as an independent deafblind adult.” In response, the crowd clapped, some out loud, others in sign by raising and shaking their hands. Ahmed, dressed in a cap and gown, stands on stage and delivers a speech in sign language.

Superintendent Ed Bosso heralded the class of 2019 for all of their accomplishments before channeling words from Mahatma Ghandi as parting advice. “You’ve been enthusiastic and curious learners,” he said. “Now go and let your life be your message.” Ed Bosso stands and speaks at a podium.

Graduates and brothers Jonah and Jamie LeDuc provided entertainment by way of a stirring rendition of “The World is Ours” by Aloe Blacc. The two have been musical standouts over their years at Perkins, and were even recognized during the ceremony for their dedication to music programming at Perkins. Two students in caps and gowns stand on stage, one singing, the other playing the trumpet.

Perkins President and CEO Dave Power reminded students that graduation isn’t a conclusion, but rather the start of a new opportunity. “It’s called commencement because it’s a beginning,” he said. Dave Power stands and speaks at a podium.

Class president Isabelle Primeau congratulated her classmates before taking a moment to remark on her own personal growth as a student and person. “Over the years, I’ve learned to stand up for myself,” she said. “Perkins gave me the opportunity to spread my wings and fly.” Accompanied by her guide dog, she later walked out of Dwight Hall the same way she came in and took her first steps into the future. A student in a cap and gown stands and speaks at a podium.