At Perkins School for the Blind, it’s a point of pride that educators have historically been in the vanguard when it comes to the rights of individuals with disabilities. 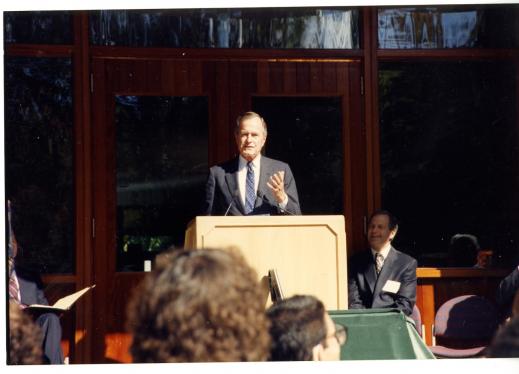 At Perkins School for the Blind, it’s a point of pride that educators have historically been in the vanguard when it comes to the rights of individuals with disabilities.

“Well before the Americans with Disabilities Act (ADA) was passed, Perkins was ensuring that every child had detailed learning plans and goals to be met, as well as specialized teachers and materials for reading, writing and communicating,” says Mary Zatta, Ph.D., Director of Professional Development for Perkins. The precursor to the ADA – known as IDEA, (Individuals with Disabilities Education Act), passed in 1975 – helped ensure there were classroom environments and assistive tools that helped individuals to become independent and gain employment and representation in the community, Zatta added.

But it was the ADA, signed into law 30 years ago this month, that solidified civil rights for disabled individuals. The sweeping legislation ruled that everything from parks to parking lots be accessible to people with disabilities. It also unlocked the doors to equal education and independence, and later job training and employment.

To celebrate who we are and how Perkins’ values, education, training and technology have spread around the world, we pulled a few of our favorite moments from the archives:

Recognizing the importance of its groundbreaking Deafblind Program, the school renamed the former Director’s Cottage, Keller-Sullivan Cottage and made it the headquarters of the Perkins Deafblind Program in 1956. Helen Keller participated in the dedication of the building that honored her accomplishments and the work of her teacher Anne Sullivan. The Perkins Deafblind Program, serves the educational, physical, psychological, cognitive and health needs of students. The original deaf/blind program’s focus on independent living and economic self-sufficiency was surely a model for other communities both long before and well after the ADA was passed.

1994: A president visits Perkins and the school’s historic globe

On October 6, 1994, President George H.W. Bush received the Ann Sullivan Medal during the dedication of the Conrad N. Hilton Building, home to the Deafblind program at Perkins. Bush attended the ceremony in honor of the ADA and the Hilton/Perkins program. He toured the campus and touched the infamous Perkins Globe, used as a teaching tool for Helen Keller and thousands of students that came after her.

“Chris was a very special person,” recalls Zatta, who was one of his teachers. “He was very socially savvy, had a great sense of humor, and learned to communicate using a very difficult method called Tadoma, in which the person feels the vibrations of the throat to understand what they are saying.” “Chris was an unusually gifted student who never missed a chance to connect with people.” He often served as a Perkins Ambassador at high profile events. On a visit to the White House, Jett met President Clinton. Instead of shaking hands with the president, the Secret Service allowed Jett to use Tadoma, placing his hands on the president’s face to gather information on what Clinton was saying.

2017: Perkins Access: Businesses see the power of even the smallest accessibility changes

Perkins Access is a branch of Perkins designed to help employers to not just comply with, but embrace the ADA’s mandate that barriers to goods, services, and communication be removed. In short, the team of consultants helps businesses envision equality and accessibility. It’s not quick work — and often takes years, says Jennifer Sagalyn, Director of Business Development, who has worked with large corporations to support all users, both customers and employees, for two decades. What’s special about Perkins Access, she says, is that “we take a human-centered approach and help our partners to see the scope of an accessibility project, how it touches everyone.”

2012: Ahead of the curve in assistive technology

The first braille writer was introduced at Perkins in 1892. In 2012, it received an exciting update. It was called the Perkins SMART Brailler® — a new learning technology that incorporated audio feedback and a display screen, offering an intuitive way for individuals, both sighted and blind, to communicate, teach and learn braille together. Today, an estimated 375,000 Perkins Braillers are still in use. For more than 30 years, the Assistive Device Center has built tailored adaptive equipment that meets the unique needs of our Perkins students. The Center designs and creates products that go beyond commercially available adaptive equipment to make our students comfortable and allow them to express themselves.

2015-2020: Focusing on real life readiness — for individuals and businesses

2019 College Success: When Perkins began offering college-readiness programs. “The goal is always self-sufficiency and independence. Making sure that people who are blind have an equal opportunity to succeed – in school, on the job and in everyday life – starts with each of us,” said Perkins CEO and President David Power. “We need to help them access information, navigate from place to place, and find their way into our workforce and into our communities.” Creating products that benefit the world outside of Perkins is an innovative approach that appeals to Power.

2020 Career Launch: The barriers to employment, despite all of these legal changes, has not lowered the unemployment rate for people with disabilities. It’s staggeringly low and likely to get worse as the pandemic continues. One bright spot in what can be a challenging transition to adulthood is Career Launch @ Perkins, which gives young adults a blueprint for finding professional success. “Our young adults have limitless potential, yet they are still facing staggering unemployment rates,” says Alicia Smith, Associate Director of Training. “We’re saying to employers, we have these candidates, we’ve trained them, we can vouch for their abilities.” This may be one of the most powerful tools in helping people with abilities accomplish what the ADA envisioned 30 years ago.