The book that revolutionized the world by introducing braille is a highlight of the Perkins Archive collection. 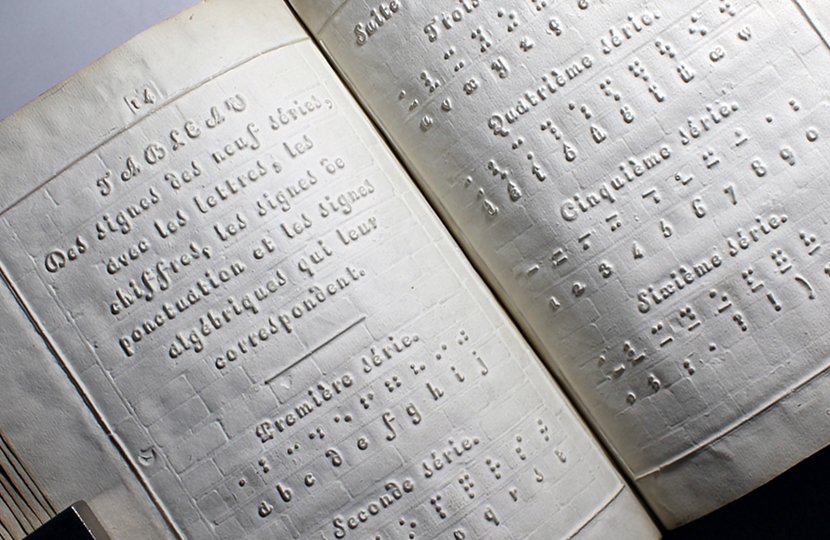 There are over 1,000 embossed books in the Perkins Archive collection – but only one of them is arguably the most famous and historically important braille book in the world.

It’s “Procedure for Writing Words, Music, and Plainsong in Dots,” written by Louis Braille, the creator of braille, when he was just 20 years old. Only six copies are known to exist.

But scarcity is not what makes the book so special.

This is the book that introduced braille to the world. In doing so, it launched an easy-to-use tactile alphabet that brought the power of literacy to generations of people who are blind. Braille also made the world more accessible, with the six-dot system eventually appearing on everything from menus to ATM keypads.

How “Procedure for Writing…” came to Perkins is a bit of a mystery, but Perkins Archivist Jen Hale thinks it may be possible Perkins’ first director, Samuel Gridley Howe, acquired it in Europe after the school’s founder, Dr. John Dix Fischer, sent him there to research blindness education.

“We’re just incredibly lucky to have it,” she said. “It’s a rare, special book.”

Entitled “Procédé pour écrire les paroles, la musique et le plain-chant au moyen de point” in Braille’s native French, the book was published in 1829. In it, Braille acknowledges his debt to Charles Barbier, a French soldier who created a tactile, dot-based military code that could be read in the dark.

Braille then suggests an improved version of that code, “in which the signs take less room than those of Mr. Barbier, were of sufficient number to represent all the characters in ordinary writing, and could be applied to music and plainsong (religious chants),” he wrote.

The braille introduced in the book isn’t the version we know today – it included dashes as well as dots. But recognizing that dashes were difficult to distinguish by touch from the dots, Braille dropped them in the second edition of the book.

Most of the book is written in an embossed, stylized version of the regular alphabet, which represented state-of-the-art accessible printing at the time. The type was produced by pressing wooden blocks with raised letters onto wet paper.

Braille, who himself was blind, did not live long enough to see the writing system he created become widely accepted. He suffered from tuberculosis and died in Paris in 1852.

However, the benefits of braille eventually won over the world. In 1854, France adopted braille as its official reading and writing system for people who are blind. And in 1878, the World Congress for the Blind followed – making braille the official alphabet for people with blindness worldwide.

“Even though it took a long time for people to accept it, it was embraced by the community that used it and needed it,” Hale said. “It speaks what a good job Braille did that it’s still used today.”

In 1952, more than a century after he published “Procedure for Writing Words, Music, and Plainsong in Dots,” Braille was reburied by the French government in the Pantheon in Paris, alongside other French national heroes.