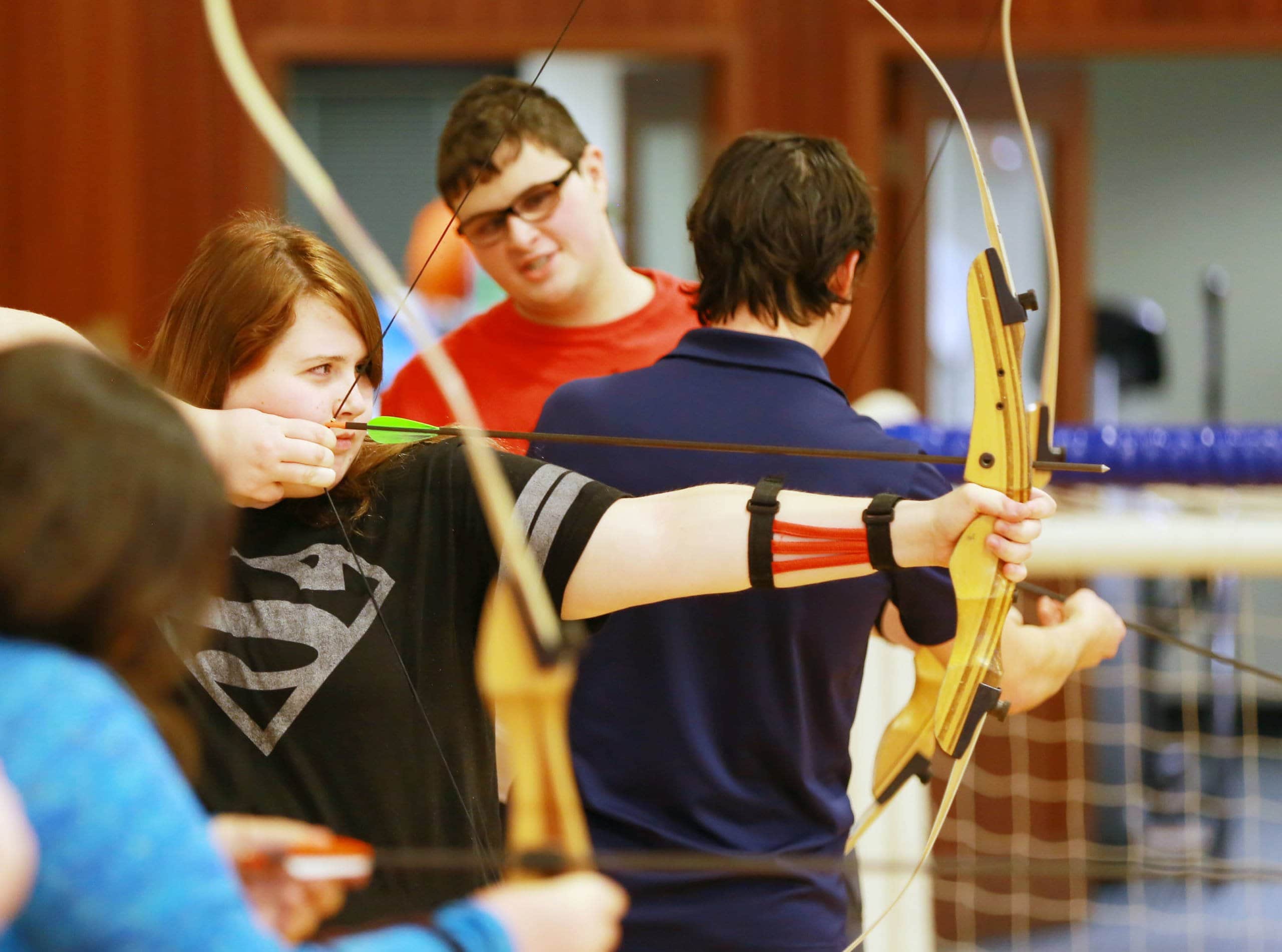 Secondary Program student Paige drew back the string of the bow, holding an index finger against her cheek as instructor Mark Pirrello counted to three. Then she fired, listening to the satisfying “thwack” as her arrow hit its mark 20 feet away.

“Really good shot,” said Pirrello. “You’re right below the bull’s-eye, just to the right of it.”

Paige and her classmates were midway through an hour-long archery lesson led by Pirrello and his colleague Winston Woo, both instructors at On the Mark Archery. They were standing in the gym at Perkins School for the Blind, which Pirrello and Woo had transformed into a shooting range, complete with colorful targets, a neon backstop and plenty of bows and arrows.

One by one, students aimed their bows at the targets, adjusting their stances according to feedback from the instructors. Once their arrows were spent, Pirrello blew his whistle to stop shooting, and students walked to the arrow-riddled targets to feel where their shots had landed.

“That’s cool,” said Paige, who has low vision. She whipped out her iPhone to snap a photo of her shot.

The month-long archery unit is part of an ongoing partnership between Perkins and On the Mark Archery, which provides licensed archery instructors for classes, corporate events and birthday parties. The collaboration has gotten students excited to come to physical education class, said teacher Megan O’Connell-Copp, since archery isn’t something they get to do every day.

“Most kids don’t have the opportunity to shoot a bow and arrow,” she said. “It really is a very safe activity and there’s that instant feedback when you hit the target – who doesn’t want that?”

As a sport, archery requires few accommodations for athletes with visual impairment. Once an archer is facing the target, muscle memory is more important than vision when it comes to making an accurate shot, said Pirrello. To get students accustomed to the shooting motion, he and Woo broke it down into segments, starting with stance and ending with the follow-through.

“This is pretty similar to how we run any other class,” he said. “The drills before you pick up the bow build form.”

Safety is always a top priority. During the lessons, Pirrello and Woo made sure students were properly aligned with their targets before allowing them to shoot. Other students sat on mats at the back of the gym, away from the flying arrows, where they chatted quietly as they awaited their turns.

Just a few weeks into the unit, Secondary Program student Mikolai was gaining confidence with the bow. Once he got his finger placement right, the shooting motion became more fluid and more of his arrows found their way to the target.

Pirrello hovered nearby, offering reminders, but let Mikolai handle the bow himself.

“It’s amazing to be here,” Pirrello said as the lesson ended. “Today a lot of kids were shooting on their own – it wasn’t like that necessarily on the first or second day. They’re building and progressing as we go.”