Benjamin Smith became the sixth director of Perkins in 1971. In addition to a number of significant changes in how the school ran, he focused on building relationships and friendships. 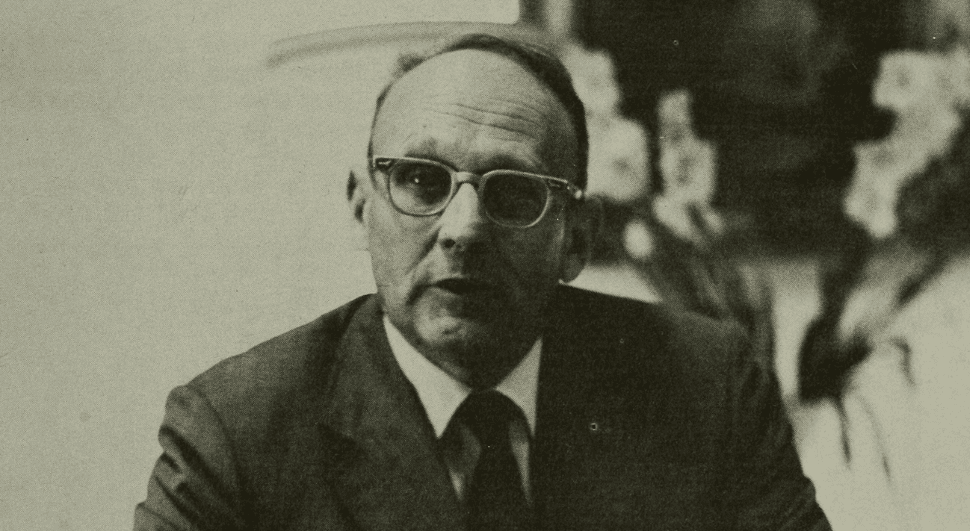 Every year, Perkins celebrates Founders’ Day. This assembly includes music, and also a look at one of the many people who helped make Perkins what it is today. Our focus this year was Benjamin F. Smith.

Smith worked at Perkins for almost his entire career before becoming director in 1971. He is also the only director of Perkins so far who was visually impaired and the only one who was trained in the Perkins teacher trainee program. Smith was responsible for a number of significant changes in how the school ran. What really caught our attention, however, was his focus on building relationships and friendships.

Ben Smith grew up in Seattle, Washington. In 1922, when he was nine years old, he was playing with dynamite caps when they exploded unexpectedly. This caused him to become blind and damaged his left hand. In 1929 he became a student at the Washington State School for the Blind in Vancouver, Washington.

There, he met someone who would become a lifelong friend, Don Donaldson. During their time in high school, they hatched a plan to sell brooms around the area. These were made by people who were blind, and selling them was a good way to earn money for college. They were incredibly successful, not only in selling the brooms, but in figuring out how to get to new sales areas. At one point, they bought a boat, and Donaldson steered it across the sound between Bainbridge Island and the mainland on a daily basis.

At one point, they hired a sighted driver. Unfortunately, after a month, the driver stole all of their income. Smith and Donaldson had to figure out how to earn the money and pay back the costs for the brooms they’d already sold. In his memoir, What’s In A Name, Donaldson tells the story with verve. They managed to earn the money back that summer, and Donaldson had surgery that allowed him to regain enough vision to drive so they could continue to sell around the region.

(Smith never drove, but he loved cars and owned several over the decades, including Henrietta Ford, a 1928 Model T, Charlotte Chevrolet, and Peggy Pontiac.)

They both attended college at the University of Washington. When Donaldson graduated, he came out to Boston to be a teacher trainee here at Perkins, and a couple of years later, Smith followed. That program brought people who wanted to be teachers to campus where they would study and work with students for a year. It’s since turned into the Educational Leadership Program for international teachers, but in the 1930s, the program had a mix of people from both the United States and abroad and was one of the only professional training programs in the country.

While Smith was a teacher trainee, he was in charge of the Boy Scout troop and introduced wrestling as a sport. He also met his first wife, Martha J. Fox, who was a teacher in the lower school, and became a teacher at Perkins. In 1943, they went to Washington state to teach at the school for the blind there, but they came back to Perkins in 1945. Unfortunately, she died later that year.

Taking on many new duties

Smith became the housemaster of Potter Cottage, and taught 6th grade. In 1947, he married his second wife, Joan Baum, who was a secretary on campus. He was busy through the late 40s and early 50s as dean of boys, as well as earning a Master’s degree and coaching a champion wrestling team. He became the Principal of Perkins in 1952, and continued to focus on social skills training for students, as well as many other duties.

By this time, Edward Waterhouse was director. They worked extremely closely together, and during a recognition of Smith’s 25 years at Perkins, Waterhouse said: “My closest friend for a quarter of a century in which time we have never had – to my recollection – a single serious disagreement.”

During the 60s, Smith focused on improving the educational program. This included developing the deafblind program at a time it was rapidly expanding, with many more deafblind students due to the rubella epidemic of 1963.

Smith was also passionate about math and computer tools. He introduced the Optacon to Perkins, a device for scanning text. Smith arranged for two machines for students to learn computer programming at a time that was extremely unusual. He shared what he’d learned through presentations at conventions, papers, and other resources, always showing, as Waterhouse said, “a deep concern” for the problems students had.

In 1970, Waterhouse announced he was retiring, and that Smith had been chosen as the new director. The announcement talks about Smith’s wide experience at the school, everything from cottage life, teaching, physical education, administration, research. The way he was constantly concerned for both the individual needs of his students and of his colleagues had stood out to the Board. Waterhouse says that he had played an important role in every decision of the school in the past twenty years.

The school changed a lot during his time as director. New legislation meant that more students who were blind were attending public schools, and that more students at Perkins had multiple disabilities. Smith oversaw changes to the curriculum to support those needs, including expanding a work experience program, increasing the options for vocational training, and making sure students had opportunities to learn and practice independent living skills. He also oversaw the building of the snack bar.

One of the biggest changes, though, was that boys and girls were allowed to interact a great deal more. Up until this point, they had classes together, but they had separate meals, study halls, and activities. Students were now allowed to have a boy or girl visit them in their cottage after dinner.

Smith was also an ardent supporter of braille, and of finding ways to help every student learn. He also oversaw the establishment of the Research Library, a centennial memorial of Samuel Gridley Howe, our first director, the sale of 100,000 braillers, and a number of administrative changes to support teachers and staff. When he retired, he moved with his wife and son to Maine, where he died in 2008 at the age of 95.

Throughout his life, his friends talk about how focused he was on listening to and spending time with the students around him. He wanted to help them achieve as much as they could, and encourage them to succeed. Everyone who wrote about him speaks so warmly, and it’s clear he was always glad to help out a friend, student or colleague. It’s also clear that his willingness to adapt to changing needs at a key point in the school’s history put us on a solid foundation today.

Branco, Bob. My Home Away from Home: Life At Perkins School for the Blind, self published, 2013, Listed in the Hayes Research Library Catalog.

Lieu, Tina, “They swept their way to success in life: Blindness was no obstacle for former islanders Ben Smith and Don Donaldson.” Bainbridge Review, 2005, p. A3. Part of the Magazine File collection. Listed in the Hayes Research Catalog.