Named in honor of Perkins School for the Blind, a floppy-eared golden puppy is training as a guide dog in California. 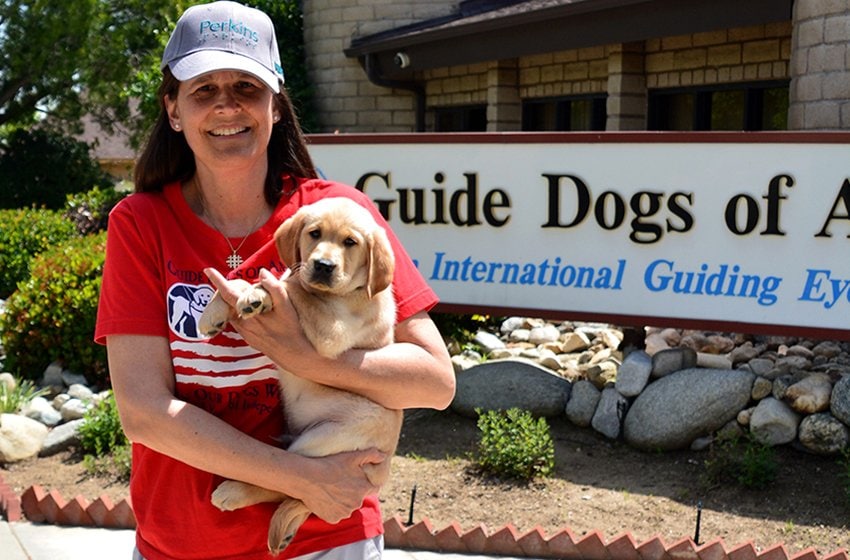 As soon as Cindy Miller learned her new Guide Dogs of America puppy was born into a “P” litter, she knew what his name had to be: Perkins.

Miller, a longtime volunteer puppy raiser and school psychologist in Upland, California, has a special connection with Perkins School for the Blind. One of the previous puppies she raised, Guinness, is now a guide dog for a former Perkins student.

When she picked up 8-week-old Perkins in April, it was “love at first smell,” she said.

Perkins is a “Lab Golden cross” – a cross between a Golden and Labrador Retriever, two breeds known for their loving, smart and confident temperaments. He was one of 10 “P” litter puppies in his class, along with Patton, Prescott, Paddington, Prada, Paisley, Panama, Pochi, Portia and Prince.

Perkins came with a special surprise: A Perkins School for the Blind bag, stuffed with a Perkins baseball cap, insulated coffee mug and other gifts, sent to Miller from Perkins’ namesake in Massachusetts.

Miller took the fluffy golden puppy home and got to work on his first commands: sit, down, stay and come. Puppies like Perkins are placed with foster families to learn basic obedience skills and to be properly socialized.

After he received his four-month vaccines, Perkins ventured out, learning to ignore “good smells” and other distractions. At five months, he started obedience classes at GDA, learning new skills and getting used to different environments. Now, he’s begun community obedience classes, where he’s gaining exposure to pet dogs of different breeds.

Perkins is a total “sweetheart,” Miller said. “He’s part of our family. He enjoys being out and about.”

At 18 months, Perkins will return to GDA for up to six months of formal training, which will determine whether he’ll qualify as a guide dog. Only 40 to 50 percent of puppies-in-training have the temperament and health to guide. Dogs must be superior problem solvers and display willingness to take responsibility for their partner. They must also learn “intelligent disobedience” – for example, not crossing a street when traffic is coming.

People with visual impairments apply to GDA for guide dogs, which they receive at no cost. If accepted, they undergo a 28-day training program with their dogs.

Breeding and training a guide dog costs about $42,000, which GDA raises through donations. Puppies also have sponsors. Miller keeps Perkins’ sponsor Macki Singer updated through a blog full of photos that show the floppy-eared Perkins in action – running on the lawn, visiting a grocery store and playing with other dogs.

Perkins is Miller’s 14th puppy. She became a puppy raiser 17 years ago, when her three young children wanted a dog. She promised her kids if they did a good job raising the guide puppy, they could get a permanent pet. But after raising one pup, they chose to raise more.

“As a family, we wanted to empower our children, that they could make a difference for another person,” Miller said.

The experience is powerful, Miller said. She’s kept in touch with some of her previous puppies’ partners, particularly Yegue Badigue, the Perkins School for the Blind student who was partnered with Guinness.

Miller’s family bonded with Badigue when he came to Guide Dogs of America to train with Guinness. They were touched by the role Perkins School for the Blind played in his life, and were proud to name their newest puppy after the school.

“Yegue has an amazing story,” Miller said. Badigue came to Perkins from Chad after losing his sight as a child. A talented musician, he now teaches music and lives with his wife and son in California.

“From the time I hear about our next puppy, I pray for their future partner and that it will be someone who will truly treasure the dog,” Miller said. “The first thing Yegue said to me when I met him was, ‘God made him just for me.’ I will never forget that day.”

Raising guide dogs takes a strong commitment, Miller said, but it’s rewarding because of the powerful bond between guide dog and partner.

“There is almost a mystical component to it,” she said. “It’s a privilege to play some small part in that miracle.”

More than their service, here’s what you need to know about guide dogs