A day with Helen Keller: Her love of reading 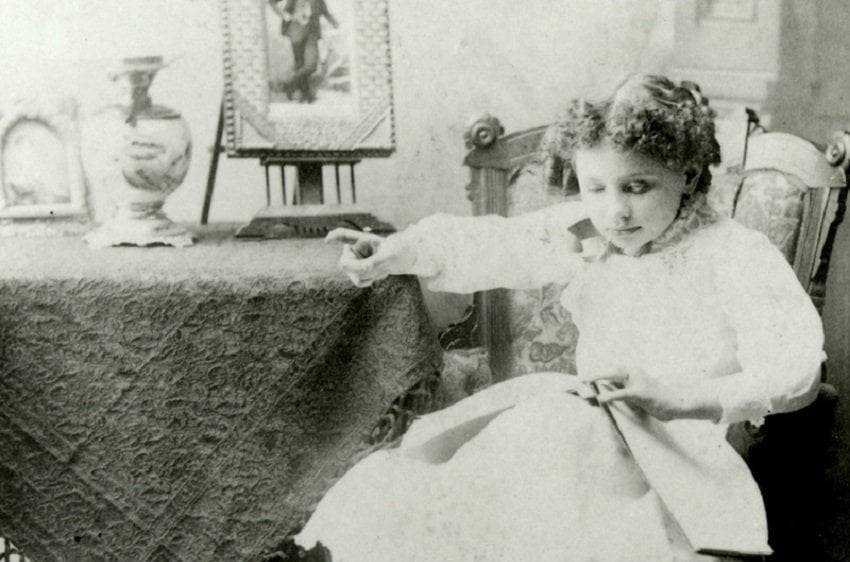 Elizabeth Emerson’s great-great grandparents, Joseph Edgar and Ida Chamberlin were close friends of Helen Keller and her teacher, Annie Sullivan, having met the pair in 1888 when they first came to Boston to attend Perkins. Ed Chamberlin was an important literary figure at the time, writing a popular daily column for The Boston Transcript and serving as an editor and staff writer for The Youth’s Companion, a nationally distributed family magazine. He and his family lived in Wrentham, outside of Boston; their home was a gathering place for literary and artistic figures of the day. The friendship between Helen, Annie, and Ed lasted more than 40 years. A former grant writer, Elizabeth Emerson is currently working on a book called Letters from Red Farm about the Chamberlin-Keller friendship and conducting research with the Perkins School Archives.

Helen Keller, along with her teacher Annie Sullivan, spent long periods of time between 1888 and 1901 with my great-great grandparents, Joseph Edgar and Ida Chamberlin at Red Farm, their home in the Boston suburb of Wrentham.

In 1906, after Helen had graduated from Radcliffe and was launched on a writing career of her own, Chamberlin wrote a lengthy article for Sunday Magazine called “A Day with Helen Keller.” He did not often write publicly about his friendship with her – so it is possible the article was written to boost public affection for her as she was about to release a new book.

From firsthand knowledge of her daily habits while she lived at his home, Chamberlin shared what he called Helen’s “most beautiful moments” each day. These moments, he believed, both “in terms of how they seemed to affect her own state and as they impressed her friends,” were “the half-hours—hours sometimes—at the end of the day, that she passed in reading her books, not for the purposes of study, but of inward delight.”

Reading for Helen, of course, required embossed books, which were not widely available at the time, and those she owned had often been transcribed especially for her by wealthy benefactors.

Helen’s embossed books were “a particular pleasure” and she had a perennial favorite book. Chamberlin wrote: “As the raised letters intended to be read by the blind are large and embossed, and imprinted upon one side of the paper only, a small book in ordinary print makes a large book of big scrapbooks. It takes two or three of these to hold ‘The Autocrat of the Breakfast Table.’ Of this book Helen is especially and unwearingly fond.”

The “Autocrat of the Breakfast Table” was a popular book written by Dr. Oliver Wendell Holmes (whom Helen had met early in her life) and published in 1858. The storyline captures a one-sided dialog between the author and residents of a New England boarding house.

Chamberlin observed: “When she reads it her face wears an expression that it never wears at any other time. She is always expecting something funny, and when the funny thing comes her half-suppressed laugh always comes too. She has read the book so many times that she knows it almost by heart, and one who watches her can see the Autocrat’s witty sayings dawning on her face sometimes before she gets to them, as her fingers move with startling rapidity along the lines. In the summer evening she sits on the veranda, with her big book spread in her lap, reading as the shadows gather, reading on after darkness has fallen—it is all one to her—and smiling, or knitting her brows, or gravely shaking her head, as the images that enter her mind through the tips of her fingers succeed one another, grave, and gay, tender, poignant, or absurd.

Sometimes she laughs aloud in her singular, individual way. Around her, people sit or pass, intent upon their own affairs. Sometimes they jostle her in their play, and Helen, smiling, extends an inquiring hand to “see” who it is. Children bury their heads in her lap, or come to her and ask for a story, for she is a capital story-teller, repeating for instance, most of Kingsley’s ‘Greek Hero Tales’ almost word for word as they stand in the book. All children quickly learn to understand her somewhat indistinct spoken words with readiness.

Her good-night, as she rises at last to go away to bed, is softly spoken, but it is answered with caresses.”

And so, a day with Helen Keller at Red Farm ended with reading – quietly, lovingly.