Did you know Johnny Depp, Judith Dench, Steve Wynn and Fetty Wap are all visually impaired? 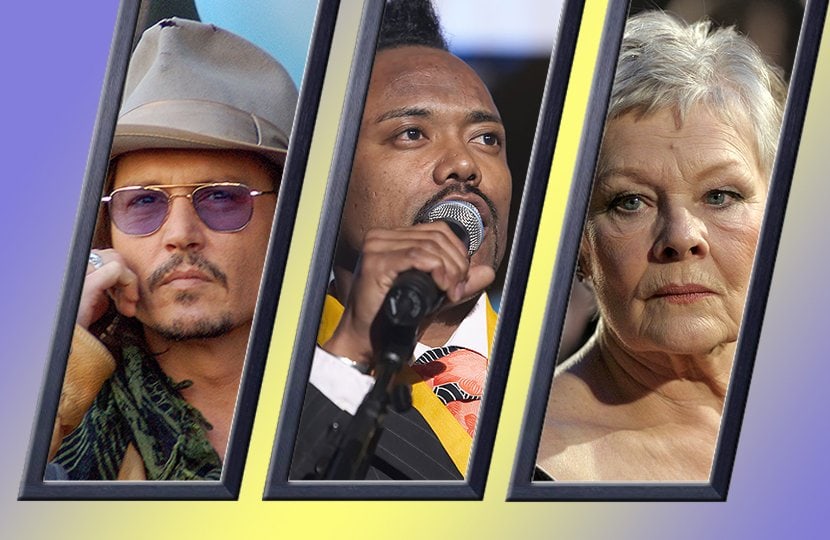 One lost an eye to a BB gun. One has age-related macular degeneration. One had an eye surgically removed because of glaucoma.

All these individuals faced vision-related challenges, but they have something else in common, too. All eight of these famous people with visual impairment have achieved remarkable success in their fields. From rappers to writers, here are eight celebrities you probably didn’t know are visually impaired:

1. When Johnny Depp first swashbuckled across the screen as Captain Jack Sparrow in “Pirates of the Caribbean,” he had a secret – he’s blind in one eye and near-sighted in the other. It wasn’t until a 2013 interview in Rolling Stone magazine that he revealed his visual impairment. “I’ve never had proper vision,” he said. “Everything is just very, very blurry.” Depp has long been one of Hollywood’s biggest (and quirkiest) stars. In addition to the successful “Pirates of the Caribbean” franchise, he starred in “Alice in Wonderland,” “Sleepy Hollow” and “Edward Scissorhands.”

2. Fetty Wap wants to make one thing clear: he wasn’t shot in the eye. The rapper was born with glaucoma and had one eye surgically removed as a child. He used an ocular prosthesis, but later discontinued it. When people ask, he explains about his visual impairment. “I tell everybody it’s nothing, because it’s really nothing to me,” he said in an interview on Sirius XM radio. Fetty Wap is one of the signature voices in modern hip hop, and helped popularize the rap subgenre known as trap music. You’ve probably heard him on the radio performing “Trap Queen,” or “679” with Remy Boyz.

3. Academy Award winner Dame Judith Dench is known for her regal performances, from Queen Victoria in the movie “Mrs. Brown” to M, the head of Britain’s MI6, in seven James Bond films. So it’s not surprising that she treats her visual impairment with royal resolve. She announced in 2012 that she has age-related macular degeneration – but intends to keep working. “I’m not going to make it something that’s going to stop me,” she told People magazine. In recent films, like “Spectre” and “Miss Peregrine’s Home for Peculiar Children,” she simply requested her movie scripts with larger print.

4. The Black Eyed Peas have played around the world, performing hits like “Boom Boom Pow” and “I Gotta Feeling.” But rapper Apl.de.ap usually couldn’t see the audience. He was born with nystagmus, which causes involuntary eye movement, and was legally blind in both eyes. “I’m comfortable not using my vision,” he told People magazine. In 2012, he had artificial lenses implanted in both eyes to improve his vision. Apl.de.ap (real name Allan Pineda Lindo, Jr.) helped found the Black Eyed Peas in 1995. Their infectious mix of pop and rap made them one of the world’s best-selling bands, with multiple #1 hits in dozens of countries.

5. An accident may have helped Alice Walker become one of America’s most beloved authors. She lost vision in her right eye at age eight when her brother accidentally shot her with a BB gun. Embarrassed by the scar tissue, Walker spent more time alone writing poetry. At age 14, she had surgery to remove the scar tissue. Told by the doctor that she might lose sight in both eyes, she later wrote that she “dashed about the world madly…storing up images against the fading of the light.” She went on to write “The Color Purple,” which won the National Book Award and the Pulitzer Prize for fiction in 1983.

6. Thom Yorke, the singer for the British alt-rock band Radiohead, isn’t winking at you. His left eye droops because it was paralyzed at birth, and he underwent five operations to repair it. The last one damaged his vision. “I can kind of see,” he told Vox Magazine in 1995. Yorke had to wear an eyepatch, which made him feel like an outsider at school. He later channeled those feelings into Radiohead songs like “Creep” and “How to Disappear Completely.” Radiohead is one of the most critically acclaimed bands of the past two decades, and its 1997 album “OK Computer” is widely hailed as a masterpiece.

7. Slick Rick and Doug E. Fresh helped put rap on the map with their 1985 hit, “La Di Da Di.” The song, with its idiosyncratic sing-song style and clever lyrics about a would-be Romeo “in Gucci underwear,” has been sampled almost 800 times by artists like the Beastie Boys, the Notorious B.I.G. and Kanye West. Slick Rick (real name Richard Walters), was born in the United Kingdom and was blinded in his right eye by broken glass as an infant. He famously wore an eyepatch while performing, including one glittering silver eyepatch that matched his other jewelry.

8. His name is synonymous with luxury casinos. He’s Steve Wynn, the CEO of Wynn Resorts, the multi-billion-dollar corporation that has owned the Golden Nugget in Atlantic City, the Bellagio in Las Vegas and Wynn Macau in China. But most people don’t know that Wynn built his casino and hotel empire while going blind. He was diagnosed in 1971 with retinitis pigmentosa, which causes gradual vision loss, and became legally blind in 2010. In 2013, Wynn gave $25 million to the University of Iowa to fund stem cell research into a cure for retinitis pigmentosa and other degenerative eye diseases.