A letter from Perkins Alumni Association members offering support to those who lost their vision following the 1917 Halifax Explosion. 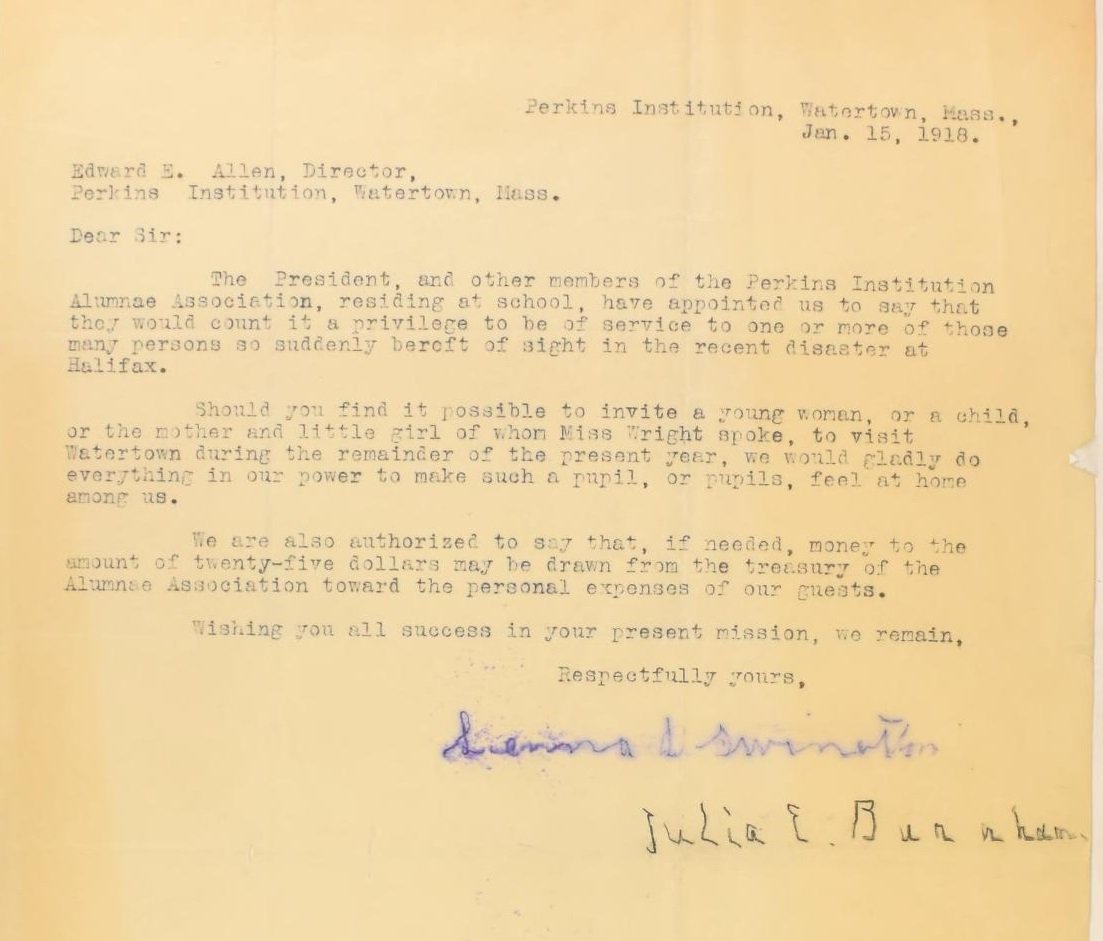 On December 6, 1917, two ships collided in Halifax Harbour. One was packed full of munitions for World War I battles and the other was on its way to pick up medical and other relief supplies for wounded soldiers. Drawn by the brilliant colors of the burning explosives, many Haligonians watched the fire from their windows, unaware of the ship’s dangerous cargo.

About 20 minutes later, however, the ship exploded. The area was absolutely devastated by the explosion which demolished a large portion of the city and created a tsunami, tremendous winds, and darkened the sky with smoke and ash. The force shattered the windows of many nearby buildings, blowing shards of glass into the faces of residents standing behind them.

Before the explosion, one sailor hurried to the Richmond Railways Yards to alert workers of the impending explosion. Vincent Coleman sent a series of urgent telegraph messages to a train that was due at the station momentarily. These messages made their way down the line to Boston triggering relief efforts just two hours after the Explosion.

Because the explosion shattered the windows that people were watching the fire behind, it was feared that hundreds of people would be left blind. Sir Charles Frederick Fraser, a Perkins alumnus, was the superintendent of the Halifax School for the Blind. He immediately began planning relief efforts and contacted Perkins’ director, Edward E. Allen, for guidance, support, and advice. In Boston, Allen notified the Boston office of the American Red Cross about the situation in Halifax and soon after was named chairman of the American Red Cross Committee on Eye Victims of the Halifax Disaster.

Perkins alumni were eager to support the newly blinded in Halifax. The letter expresses their desire to house, or fund, students from Halifax. Other schools for the blind in the United States made similar offers. The offers, however, were turned down because funding for the Halifax School for the Blind depended on how many students it had. Luckily, attendance at the school in Halifax was relatively steady following the disaster.

You can learn more about Edward E. Allen’s work and involvement in the Halifax relief efforts at our online exhibit to commemorate the 100th anniversary of the explosion. We’ve also digitized our entire Halifax Explosion Collection on the Internet Archive and have a collection of transcribed newsclippings available on Flickr.

Transcription of the letter

The President, and other members of the Perkins Institution Alumnae Association, residing at school, have appointed us to say that they would count it a privilege to be of service to one or more of those many persons so suddenly bereft of sight in the recent disaster at Halifax.

Should you find it possible to invite a young woman, or a child, or the mother and little girl of whom Miss Wright spoke, to visit Watertown during the remainder of the present year, we would gladly do everything in our power to make such a pupil, or pupils, feel at home among us.

We are also authorized to say that, if needed, money to the amount of twenty-five dollars may be drawn from the treasury of the Alumnae Association toward the personal expenses of our guests.

Wishing you all success in your present mission, we remain,

Lenna Swinerton, an alumna who paid it forward